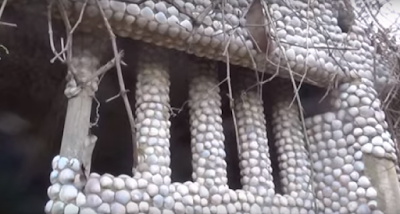 pictures are screen prints from the video by Serflac, see documentation

Tavernes de la Valldigna is a community of some 17000 inhabitants located along the Spanish Mediterranean coast, about 55 kilometers south of the regional capital Valencia. When editing this post about Villa Pechina in November 2017, the region was hit by flooding caused by heavy rainfall, which is a curious coincidence with the fate that hit this art environment in 1996, 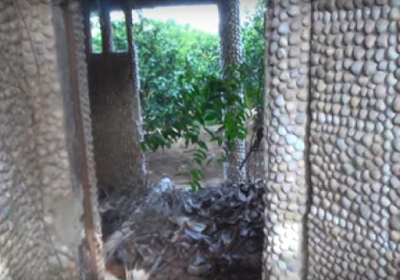 Manuel Palomares (1924-2004), born in a modest family in Tavernes de la Valldigna, wouldn't enjoy much education because of the the Spanish civil war in the 1930's.

After World War II, in 1950 he moved to France to work there until in 1960 he returned to his birth town. Here he found a job in construction and he married in 1961. The couple would get three children.
, 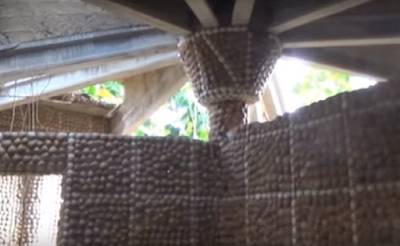 In 1974, at age fifty, Palomares got a traffic accident. He was declared incapacitated for work and received an invalidity allowance.

Owning an inherited piece of land, he decided to use the free time he now had, to construct a building on this site, initially intended as storage for the garden tools.

But then he took a completely different direction. Although before he had no connection with creative activities at all, Palomares got the idea to decorate the construction with shells.

It would become a lifetime project 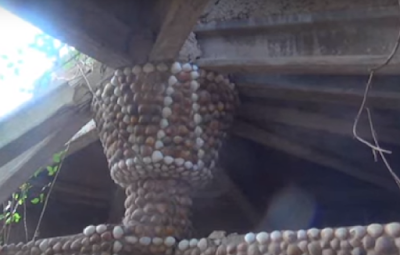 The house got a steel infrastructure and was bricked up with elements of reinforced concrete. Both the outer and the inner walls were covered with bivalve shells, which Palomares collected on the local beach, selecting especially the small and round ones named pechina shells. Palomares preferred to use white shells to decorate the larger parts of his art environment and maybe that's why he was nicknamed Pepe Blanco.

An outer staircase decorated with shells, flanked above and below by a couple of decorated columns, led to a rooftop that had been transformed into a terrace with various departments, each with its own capacity.

These structural parts were supplemented with a variety of shell-decorated elements standing on their own, such as a roof table sheltered with an umbrella, all kinds of lamps, flower pots, benches, a large freestanding sun dial and also a dog house with a saddle roof. 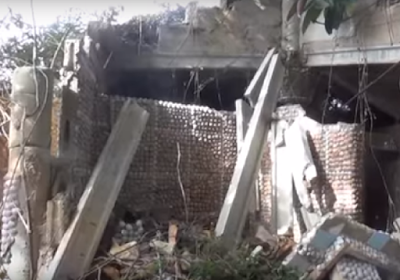 In the early 1990's Villa Pechina had become a beautiful, harmonious site, but then Palomares became ill and could not properly maintain his creation.

In September 1996, the region was hit by heavy rainfall and strong winds, which caused a catastrophe with a widespread deal of devastation. Villa Pechina was also destroyed. The site was left for what it had become after the storm, a situation that continues until the current decade

Manuel Palomares passed away in 2004.