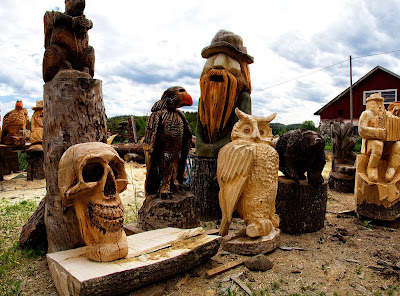 this picture and the next four (2018)
courtesy of Kimmo Heikkillä

Kosmala is a small community in the Southern Savonia region in Eastern Finland.

It is also the place where Timo Teittinen, born in August 1964, is so active in the production of wooden sculptures, that it can be said there is an art environment in development.

Creating wooden sculptures with the help of a chainsaw for Teittinen is an adventure that he has started only relatively recently. 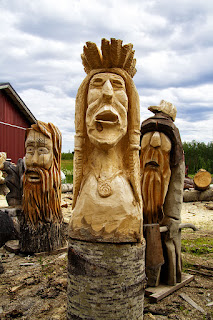 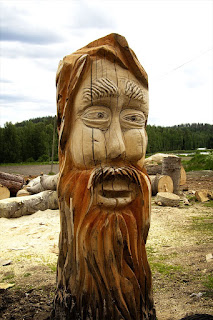 Initially he worked as a farmer, especially in the livestock sector, but at a certain point this business was only profitable with further expansion of the livestock, a development Teittinen did not opt for.

So probably around 2015 he chose another professional activity, which he found in timber construction. among other things the construction of log cabins.

On You Tube one can find a video from early 2016 that shows Teittinen active in building such as log cabin, with a lifting device, a chainsaw, a ruler, a spirit level and a hammer as the only tools.

Around the same time he also began making wooden sculptures with a chainsaw. It has been reported that especially in winter 2016/2017 he worked with a big commitment. 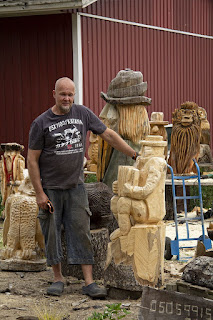 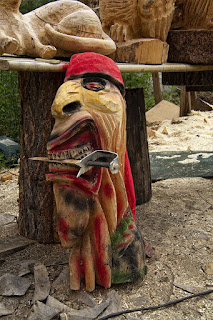 In Finland people love to decorate the garden or driveway of their house with a wooden bear and Teittinen obviously creates bears (also on order), but the remarkable thing about his creativity is that he also depicts other ("non-commercial") characters in wood. These creations have a specific expressiveness, which testifies to an expert signature, sometimes with references to old sagas and legends.

Although Teittinen is only relatively briefly active as a self-taught artist, he has already produced an extensive collection, which is displayed near his house, an art environment in an early phase. 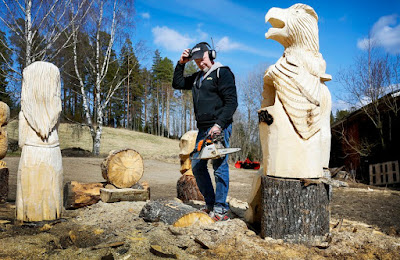 this picture (2017) from newspaper Länsi-Savo

Teittinen already participated in an exhibition, an overview of ITE art in Southern Savonia, which could be seen in the Finnish Forest Museum in Lustå in Punkaharju (April 27, 2018 - January 6, 2019)