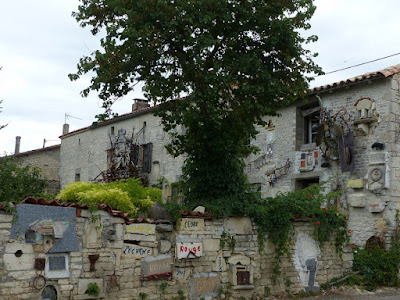 pictures (2017) courtesy of Sophie Lepetit
.
The picture above shows a backyard located along a street in the community of Couture d'Argenson in the Nouvelle-Aquitaine region in France. It's a small community with some 400 inhabitants ¹.

This backyard, which is mainly decorated with a variety of items and installations made from discarded ironware, is a creation of Roger Petit, about whom not much biographical data are known. 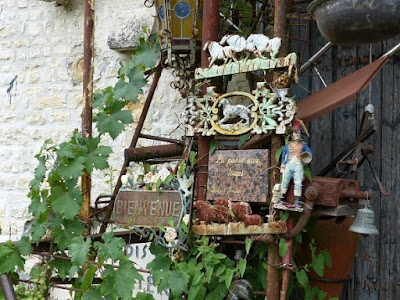 He was born in may 1951, was enlisted with the French Foreign Legion and joined the French Marine, Never married, he has no children.

Since French soldiers after about 25 years of service may retire when they are in their mid-forties, it is very well possible that Petit in the middle or late 1990's got retired and then settled in Couture d'Argenson. 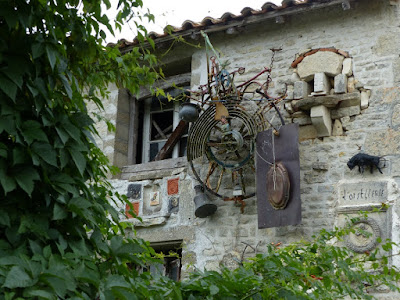 And maybe once settled or some years later, he also began decorating the backyard of his house, that is located on a corner, the front side facing a main street while the backyard is adjacent to a side street, separated from that street by a somewhat messy built-up brick wall.

Some stones in this wall are marked with inscriptions, such as le triple fer (the triple iron), la commanderie (the commandery), la plantation (the planting), cedre (cedar) or rouge (red), while there also is a marble nameplate with the name of the resident/creator of the site. 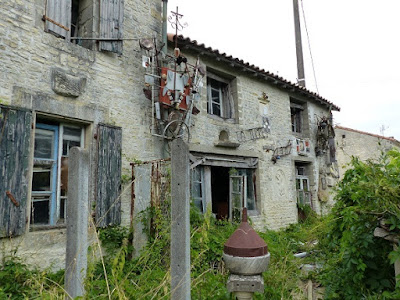 The wall at the rear of the house (actually an assembly of the main building and an adjoining smaller building) is decorated by three large-scale compositions of iron elements.  The picture below shows one of these creations,  a more or less haphazard combination of all kinds of iron rings, rods and objects. probably just meant as a creation with a decorative function.

Most of the iron items that Petit uses in his installations come from the dump, although he also buys these nowadays. 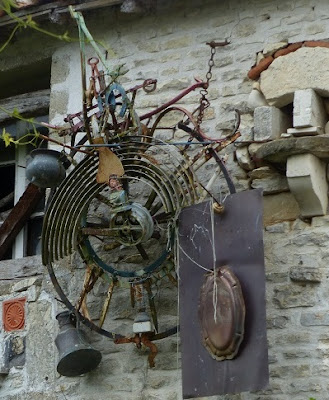 In the back of the garden there is an installation consisting of an accumulation of both large and smaller iron items such as corrugated iron, fences, rings and a street sign, a constellation that a lot of people will not regard as a creative construction.

Indeed, the local authorities are not so happy with the site, but Petit has a good relationship with the local residents. 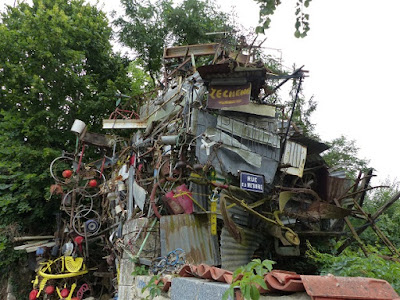 Note
¹ I like to acknowledge that this post is based on an article in the weblog of Sophie Lepetit, which as far as I know is the only available source on the internet discussing this site.