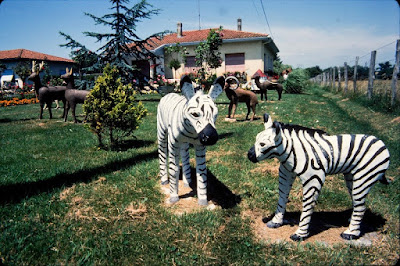 In the field of french art environments it was assumed that the creation Bestiaire de ciment (Bestiary from concrete) had been completely lost after the death of its maker, Alphonso Calleja.

Indeed, the sculpture garden as such doesn't exist anymore, but in 2018 reports have appeared which show that a large number of works have been preserved. 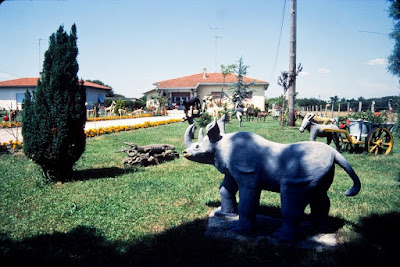 Alphonso Calleja (1915 - ?) was born in Santiago du Chili, the capital of Chile, South America. In 1920 he moved with his family to France, where as an adult he worked in the paper mill Cellulose de Pin in Biganos, while he lived in the nearby community Gujan-Mestras.

These places are located along the Bassin d'Arcachon, a bay connected to the Atlantic Ocean, about 50 km south-west of Bordeaux. The bay is well-known because of its oyster culture and its surrounding area welcomes many holidaymakers. 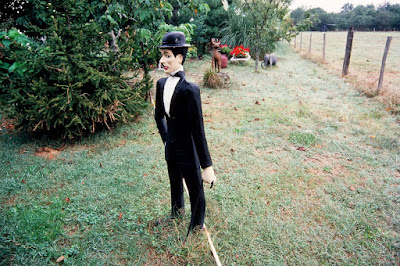 As the pictures show, Calleja's house, Villa Soleviento, had a fairly large garden.

In 1969, when Calleja was age 54, he started to decorate the garden with sculptures made of concrete, especially depicting animals, but also certain personalities, such as Charlie Chaplin.

The depicted animals are mainly of African origin, such as zebras, tigers, a panther, a rhinoceros, or a springbok. but Calleja also depicted some prehistoric animals. 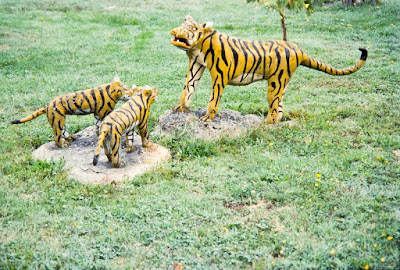 The pictures show how the garden looked around 1990. These photos were taken by Francis David, a lover of art environments who between 1978 and 1992 traveled France several weeks a year to photograph these sites. Part of his large collection was published in march 2018 in the documentary website Habitants-Paysagistes edited by the Lille Art Museum.

During the years Calleja actively worked on the production of his bestiary, namely the last decades of the 20th century, the site received little publicity in what was then the literature of researchers of art environments. And when around 2008 writers about these sites became active on the internet, Calleja's sculpture garden already had ceased to exist.

In which year this happened, it was unclear for a long time, but it has recently become known that in 2008 the antiquarian Georges Schellinger, who is established in the region, bought Calleja's collection of sculptures. This sale undoubtedly took place because Calleja was deceased (in which year is not known) and the house probably was sold by the heir(s). 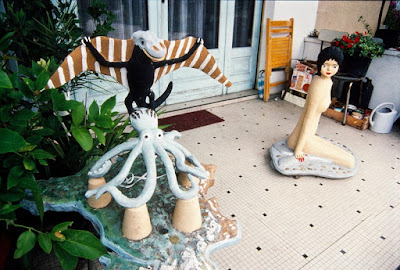 
In 2010 antiquarian Schellinger sold the collection of sculptures to an inhabitant of Lège Cap-Ferret, another community located along the Bassin of Arcachon.

When in 2015 the new owner sold his house, Schellinger bought the collection back. It is now located on the densely wooded grounds around the branch office of the antiquarian on the avenue de la Vigne in Lège Cap-Ferret, where it can't be visited.