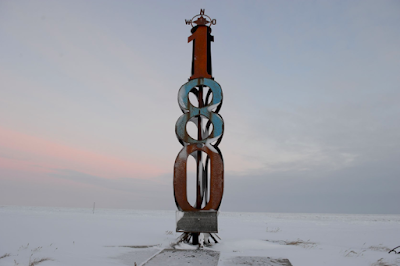 This blog understands Europe in a geographical sense and so it includes the land mass west of the Urals. However, the art environment presented here is located east of the Urals, in the extreme north-west of Arctic Russia, in the district of Chukotka, an area with a harsh climate, bisected by the 180ᐤ meridian.

Presenting here these monuments of iron scrap that together form the art environment, is not only due to their impressive appearance, but can also be based upon the various honoring references these sculptures include to European explorers and other courageous people of both Russian and Western origin ². 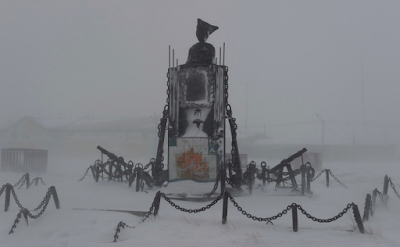 Monument in honor of James Cook

The iron sculptures presented here have been created by Yuri Alexandrovich Dunaev who grew up in Tajikistan and at a young age already dreamed of becoming a pilot. He tried to enter a school for aviation to become a pilot, but could not afford the registration fee. So in Uzbekistan he did a study for air traffic controller. During his military service he was a radio-operator.

Around 1977 he became air traffic controller at Cape Schmidt airport in the Chukotka district in the far north west of Russia, a job he currently -after over forty years- still fulfills. He lives in an apartment in the small community of Ryrkaypiy, not far from the airport. 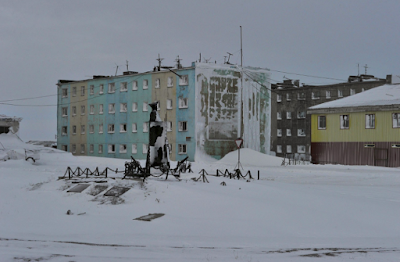 When James Cook -on discovery voyage in 1778- for the first time in western history sailed past the coast of Chukotka, he named the area Cape North.

In 1934 the area was renamed Cape Schmidt in honor of Otto Yulyevich Schmidt (1891-1956), in the Soviet Union a famous scientist and leader of expeditions, such as the North Pole expedition in 1933-1934 with the steamer Chelyuskin  (the ship crashed after being stuck in the ice for five months, after which the passengers stayed in makeshift huts, to be rescued eventually by many flights of aircraft).


In the 1980's Dunaev began making sculptures, mainly using iron scrap he collected at the local dump.  The local authorities gave him a permit to search for useful items at the dump, friends helped him to transport large material, and it also happened that he got help from the army, for example by making a crane available to install a high rising monument. 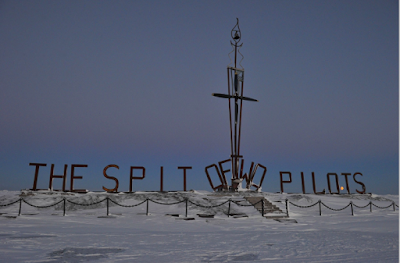 
Over the years, Dunaev has created some twelve large-scale monuments, which are interconnected by an overarching theme, that includes remembering specific characteristics and (sometimes dramatic) events of the area of Cape Schmidt and honoring those involved in these events.

One such characteristic is that the 180ᐤ  meridian runs over land in this area. And its special that there are the only two spots in the world where this meridian goes over land, namely Cape Schmidt and the Fiji Islands Otherwise the meridian runs over the oceans.The monument was erected in September 1980 and is 12 m high. The numbers 1, 8 and 0 are executed in triplicate, each set forming a triangle, with each triangle painted in its own color, white, blue and red.

The monument for James Cook  (1728-1779), honors the British explorer who in 1778 was the first European to map the North Cape. It is three meters high and it was installed in 1998 in the community of Cape Smith, which is some six km from Ryrkaypiy, where Dunaev lives.. The guns left and right, which rest on aircraft landing gear, initially could fire salvos during festivities, but because of safety that capacity has been removed.

The Spit of two pilots, installed in 1987, is a monument in honor of the American pilots Ben Eyelson en Earl Borland, who in 1929 crashed with their plane while rescuing cargo from a ship stuck in the ice. It is located near the community of Cape Smith.

The sculpture is decorated with a propeller of an airplane and an image of a flag that combines the flags of Russia and the United States. At the top of the creation an iron flame includes a bell that rings when the wind rises, a quality that can serve as a beacon for ships in fog. 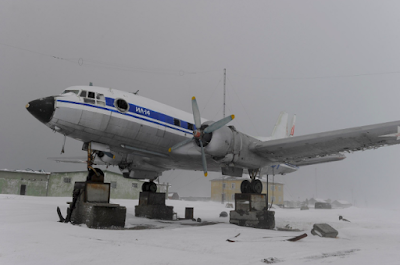 The plane pictured above is an Ilyushin Il 14, in service from 1954 on in civil and military aviation. It was installed in 1991 as a Monument in honor of civil aviation  It was donated by the Ministry of Civil Aviation with thanks for Dunaev's perseverance in creating kind of a museum and preserving the memory of civil aviation. 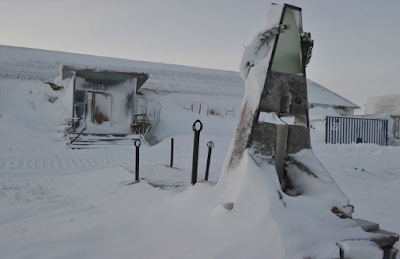 The monument pictured above was created in memory of an accident during an international expedition  in Chucotka in 1993. when a helicopter with French researchers on board crashed, which resulted in the death of eight people.

Installed in 1995 the monument includes eight polished semi-precious stones behind an armored windscreen of a TU-16 plane.

Pictured below is the monument in honor of  Nils Adolf Erik Nordenskiöld  (1832-1901), who was a geologist and Arctic explorer. He was born in Finland but spent a large part of his life in Sweden. He became known from his expeditions to Greenland and Spitsbergen,1872-1873 and the expedition of 1878-1879 when he was the first to discover and sail the Northeast Passage.

Near the North Cape the ship was caught in ice that drifted away. Only later, when the ice became thinner, the ship was released.

The monument, surrounded with anchors, includes a globe that shows the continents, the various seas and the Arctic area with the trajectory of the Northern Sea Route. Nowadays, because of the changes in the climate, the northern route is a large part of the year free of ice, so it becomes more attractive for commercial shipping. 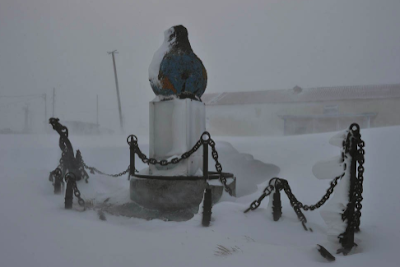 Currently Dunayev still is considering plans to expand the acreage of monuments and he also active in the maintenance of the current monuments.

Documentation
* Andrey Shapran, "Duneav. History of the Arctic air traffic controller-sculptor", article (July 2018) on website LES Alpha (with photographs by the author)
* Evgeny Basov, "Cape Otto Schmidt.The man who erects monuments", article (November 2017) on website Live Journal
* Odynokiy, "Autodidact sculptor from Cape Schmidt ...", article (July 2016) in Life Journal
* An article (July 2016) in Life Journal about the crash of the two American pilots in 1929, the search for their bodies and their funeral
* Article on the website of a Chukotka travel agency about travelling to and in Chukotka

note
¹ Andrey Shapran is a well known photographer in Russia. To get an impression of some specific aspects of the area where Dunaev's monuments are located, take a look at his series photos Cape North (2015, about living conditions in Cape North) and First Uranium (2015, about a remote penal camp (1950-1953) where prisoners worked on the extraction of uranium)
² This taking into account that characteristic sites in the Asian part of the Russian Federation are also included in this weblog in order to give a balanced and coherent picture of the entire field of Russian art environments.