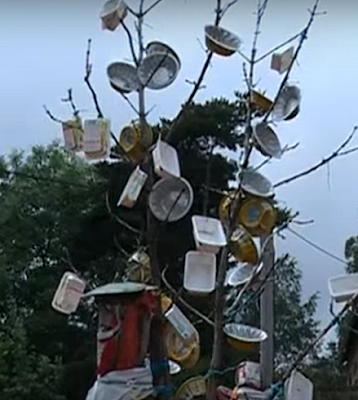 The small hamlet Rimeizenc, part of the commune of Peyre en Aubrac in the Lozère area in the south of France, houses a special art environment in the capacity of hundreds of dressed scarecrows, both situated in the landscape and indoors as in a museum.

This site is a creation of the couple Denise and Maurice Chalvet, They married in the 1970s and went to live in a farm house that was built by Denise's father. For many years, working in the old traditions of the region, they ran a small-scale agricultural business, which in the late 1990s was expanded with a new form of activities.

This new form started when they produced a scarecrow to chase away a hawk that was after the chickens. As so often happens in the field of art environments, once started they could not stop. Making scarecrows in all kinds of clothes and looks, would determine their further daily life.

Maurice is mainly involved in collecting and assembling pieces of wood that are suitable to serve as a frame, and Denise focuses on making the heads and dressing the creations. Denise shares her creativity with her father, who (like Denise) played an accordion, and carved sculptures from wood which depicted scenes of rural life in the area.


Simple materials are used for the heads, such as packaging of items used in the daily household (like yoghurt pots) , bottle capsules (for the eyes), rope (for hair and beards) .......

By painting and adding small details and of course by the manner of clothing, the specific appearance of each scarecrow is reflected.  With regard to clothing, residents of the village lend a hand and make discarded items available. 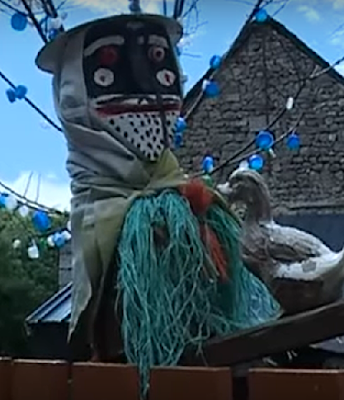 Initially, the scarecrows were set up on the hilly grassland behind the house.

In 2001, some two years after the start, when the collection just comprised some 38 items, regional French TV came by to make a report. That was a sign for Denise and Maurice that their creative activity apparently attracted wider interest and they decided to open the site to tourists.

Tourists did indeed start visiting the site, experiencing perhaps -as stated in a French weblog- that those scarecrows regard the visitors with a mocking air, while the visitors naively thought they came to view the scarecrows .....

After several years -Denise and Maurice meanwhile had retired- they decided to also display scarecrows in the garage and a stable of the farm house, where they are less vulnerable. 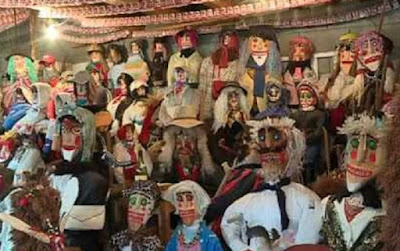 So, in addition to the exposition on the surrounding hill, a Museum of Scarecrows was established. The picture above shows how closely packed the various characters are arranged and also how intensely they regard the visitors.

Parts of the site, such as the entrance and interior rooms, have been decorated with colorful garlands or other decorations, like rows of painted yoghurt post. There are also decorations formed by used pots of candles, donated by the local chapel.

Documentation
* Article (2013) on website Un regard different sur la nature, with pictures and a map

* Fabien Ribery, Le petit peuple des épouvantails, in weblog Intervalle (May 2016), with pictures
* Article (May 2016) on weblog Intervalle by Fabien Ribery
* Article (2016) in newspaper Le Monde
* Facebook page about Rimeizenc, with photos of the site (July 2019) by Nicolas Eon
Movie
* The filmmaker Remy Ricordeau, well known in the field of art environments for his film Bricoleurs de Paradis (2010), has made a film about the site of the scarecrows. entitled Denise et Maurice, Dresseurs d'épouvantails (2016, 55 min), which in a special presentation has been shown to the inhabitants of Rimeizenc. The film is available on DVD attached to the booklet by Ricordeau, with the same title as the film, published in 2016 (Paris, Ed l'Insomniaque -80 p. collection La Petite Brute, preface by Bruno Montpied)
Videos

* Video (2017) by Amta (YouTube, 4'34") with Denise Chalvet playing the accordion amidst the scarecrows

Email ThisBlogThis!Share to TwitterShare to FacebookShare to Pinterest
Labels: site with scarecrows