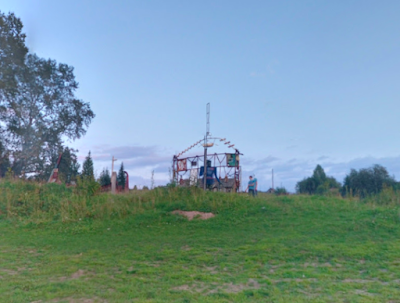 the open-air museum (around 2017) as seen via streetview

Sulem is a small village of less than a hundred inhabitants, located on the right bank of the Chusovaya River in the Sverdlovsk region of Russia. The village was founded in 1735 for the transit of products from the since 1701 existing ironworks in Nevyansk, transportation that now goes by train.

Various elements of the centuries-long involvement of the village with the river and the transport of iron are expressed in an art environment in the capacity of an open-air museum. created by Pavel Ivanovich Gilev.

Pavel Gilev was born in Sulem on June 20, 1933. After his primary school he went at age 17 to a craft school in Yekaterinburg, where he in 1952 graduated as a mechanic. Then he would work in industrial companies as a mechanic and as a laboratory employee.

In 1983, at the age of fifty, he retired and returned to his native region. 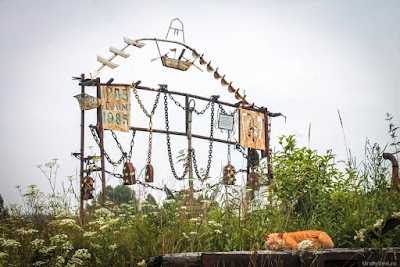 this picture and the next five courtesy of  Pavel Raspopov,
from the article on his website Uraloved

From an early age Gilev was very interested in the history of this region. In 1964 he produced a book on this subject, based on his own observations and data collection, a book that probably was single-handedly manufactured on a typewriter. The local authorities and the Sulem village council received a copy, as did the Museum in the nearby town of Nizhny-Tagil.

Once retired, in 1984 Gilev started another project with historical aspects. Realized in the 1980's and 1990s, he developed an open-air museum of mainly iron creations that evoke memories of earlier times, when the river was still navigated by ships that transported iron products. Located in a green hilly landscape near the village and along the Chusovaya River, this open-air museum can be seen from afar.

Main elements of the Museum

The most striking and image-defining element of this site is the iron structure, as in below image. 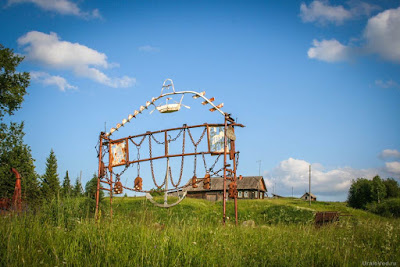 At the top of the iron frame is a boat with rowers. This symbolizes the village. In one top corner of the scaffolding an iron plate with the inscription Sulem 1705–1985 is mounted, in the other corner there is a plate with carved silhouettes of a scythe, a fir and an ax.

Very specific parts of the scaffolding are the heavy iron blocks with protrusions. 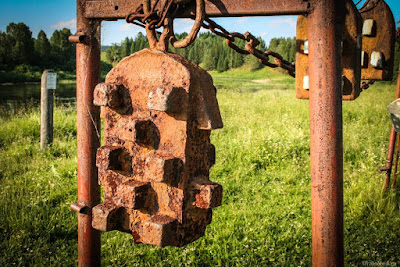 In local shipping these blocks were thrown overboard on chains to limit the speed of the ship if the river flowed dangerously fast, an item reminiscent of events that must be in the memory of all who once sailed the river.

Another sizable item is a boat made with iconic elements of old Russian and Viking ships, complemented by all kinds of old machines from the early and mid-20th century. 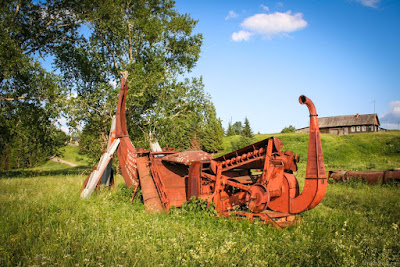 The construction has inscriptions (not visible on the picture) that deal with the collapse of the USSR, expressing that the initial hopes of better times turned into disappointment during the Yeltsin period

The site has more creations with texts. For example, there is an iron structure that says People! Sow well on earth!

And what about the structure depicted in the next photo? 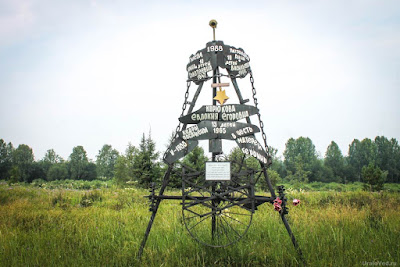 It's a monument in homage to the mothers of large families of Sulem, among whom Gilev's own mother.

In 1988 he added a structure that reminds of the three mothers who had received a municipal title: in 1947 Gilev's own mother Gileva Irina Savvateevna, who got 10 children, then in 1965 Koryukova Evdokia Egorovna, mother of 12 children, and in 1966 Patrakova Anna Vasilievna, mother of 10 children. 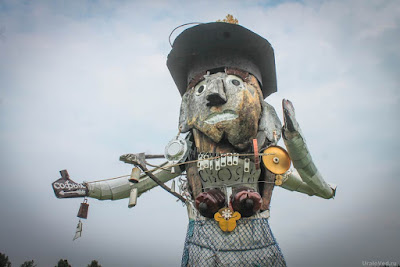 In addition to the large iron structures, this art environment includes various smaller items that evoke the memory of the area's earlier times, while one creation is mainly made of wood, the sculpture depicted above, referred to as Sophia Svoyak.