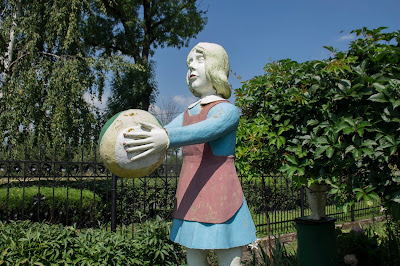 Above sculpture of a girl with a big ball can be seen in the garden of a house in the small village of Zwierzno in northern Poland, about 90 km southwest of Gdansk.

This sculpture was created by Jan Korytkowski (1915 - 2008), who was born in the more southern town of Ostrołęka, but spent most of his life in Zwierno, where he was the local blacksmith. 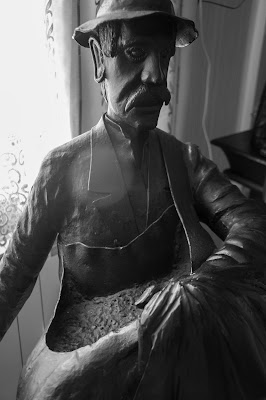 In the 1950s, as a self-taught artist, Korytkowski began making sculptures, depicting his characters rather realistically.

Being a blacksmith, he mainly worked with metal. The above sculpture of a farmer who is sowing, gives a good impression of this.

The sculpture of the girl with the ball, above, and the one of the boy,  below, although they at first sight seem to be made of wood or concrete, are also metal creations. 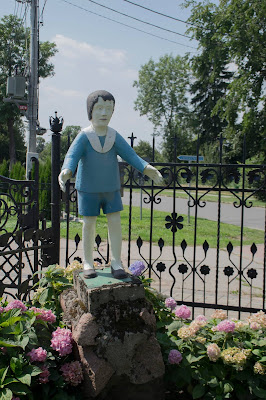 Korytkowski was most productive in the 1960s and 1970s. He not only made sculptures of persons, but also crosses, gates, an eagle with a lantern ...

Most of his creations are scattered around Zwierzno, located in churches and other more or less public places.

The collection that can still be seen today in the garden of the house, managed by a son of Korytkowski, includes only a small part of everything he created. 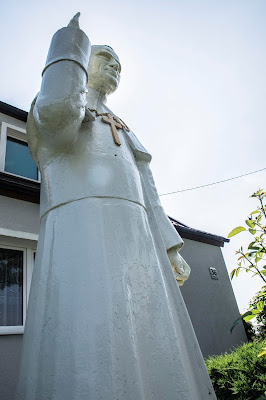 The garden also has one of Korytkowski's best known works, a sculpture that depicts Pope John Paul II, who cam from Poland and was pope from 1978 until his death in 2005. Born in 1920, the Pope still looks young on this sculpture that was made in 1979.

Documentation
* The internet has almost no information about Korytkowski. The only source is Labarzewski's page Znalezienie on Facebook. I would like to acknowledge that the above article is  based on this information
* And there is one site, an inventory of Polish houses from earlier times with a large hayloft, that has a photo of the sculpture of Pope John Paul II.

Jan Korytkowski
Sculpture garden
Zwierno, Poland
can be seen from the road