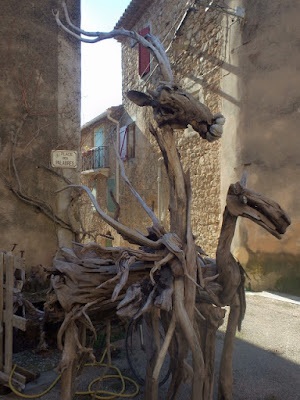 pictures (2018) courtesy of Dominique Clément
from his weblog Herault Insolite

Mourèze is a small community of almost 200 inhabitants in the south of France, some 50 km west of Montpellier. It is known for the nearby nature reserve Cirque de Morèze. a mountainous area with high-rising rock formations.

And in the field of at environments the village is known for sculptures of driftwood, placed in public space.

These creations were made by Emmanuel Cometto and were arranged in front of and in the vicinity of his home/studio Atmosterre, on the Place des Palabres. 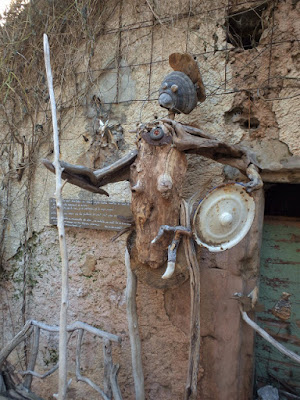 Comettto was born in 1968 in the town of Thionville in the Moselle area, Northern France. Initially he had occupations in a technical sphere, such as joiner, construction worker or welder in the aviation industry. But from an early age he also was someone who could live in imaginary worlds and liked making drawings, ceramics or sculptures.

In 1995, meanwhile married, he moved with his wife and a daughter from Northern France to Corsica, where the family settled in  the small community of Lugo di Venaco in the center of the island.

Venaco is not far from Corte, the former capital of the isle, where Thierry Léonelli has a well known pottery workshop. Soon Cometto got a regular job in this pottery, where he could further develop in the manufacture and glazing of ceramics.

In the summer of 2001 Cometto and his family (meanwhile also a son was born) moved to Mourèze, where Cometto installed his own home annex studio, named Atmosterre. 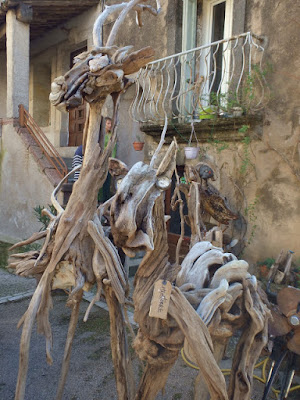 From the moment he settled here, Cometto has developed into a versatile artist and carpenter of craft items.

He made remarkable technical devices (such as a shoe with a built-in radiator, a flying broom -long before Harry Potter- or a musical flying saucer), graphic work (such as business posters and illustrations for books), ceramics (such as plates and bowls, including special ones for a star restaurant in London) and wooden structures (such as large tree houses and wooden cabins, but also wooden composters, not only for household use, but also for installation in residential areas in the region, these marketed via Divesterram ). 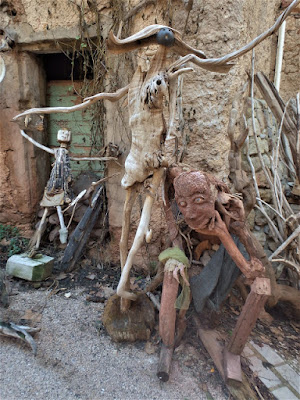 A rather unique aspect of Cometto's creative activity is the collection of sculptures he made of driftwood, a way of working he started around 2015. and continued for a number of years.

He finds his material along riverbanks or on the beach along the Mediterranean and, as he says, he is ".... using it as it is, without sculpting or even cutting it ... I observe the shapes and colors and put together what goes well, a bit like a puzzle ... I harvest these woods that are precious to me in the lake or by the sea. The woods are all rounded and very solid, which gives sculptures (even large ones) the ability to stay outdoors". 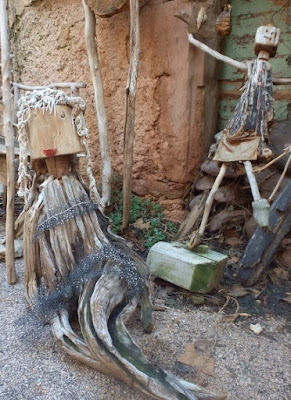 These creative activities in arranging drift wood in such a way that more or less recognizable persons and animals emerge, have resulted in a large number of sculptures, small ones, but also large ones of some meters high.

Visitors could see a guitar player, a mermaid from a chestnut root, a some meters high giraffe and all kinds of other larger and smaller animals, a little hunter from the cro-magnon era, a two meters high Masai man and woman, and so on. 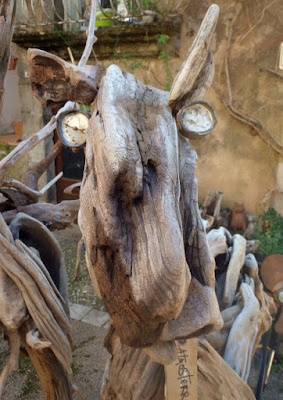 Cometto's studio, in the basement of the house, could not store such a large number, and so the sculptures found a place on the square near the house and probably in the adjacent streets.

Although the display of the sculptures in every respect resembles an art environment, it was probably not a conscious choice by Cometto to make such a spatial creation, but it rather was a practical necessity.

With regard to the qualification art environment, however, it should be noted that the sculptures are in principle intended for sale and so the collection may have a variable character in the event of items being sold.

All this makes no difference to the appreciation people who visit Morèze have for the creations; in general, they take great pleasure in viewing them.