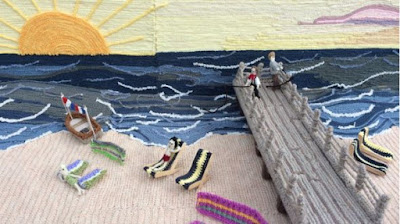 At first glance it is not so visible, but a closer look reveals that all parts of the above miniature scene  -the sky, the sun, the sea, the beach, the pier and the person on it, the beach chairs, the air mattress and the boat- are knitted or crocheted.

This scene is part of a four meter long set of miniature scenes, depicting the recreational facilities along the seafront promenade in Great Yarmouth, England, first exposed in February 2019.

This set was created by Margaret Seaman when she was in her late eighties.

Born in April 1929, she married in the 1960s and worked with her husband Fred in his business supplying children's rides and amusements to tourist venues and attractions. 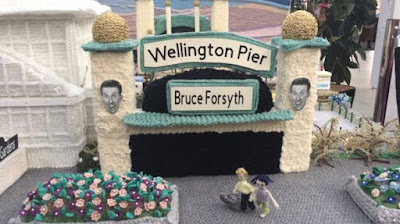 another part of the Great Yarmouth set

After her husband died in February 2013, Mrs Seaman -who was now 82- went to live with her daughter Patricia Wilson in Great Yarmouth.

Following her daughter's advice she joined a knitting club, run by a local social center, that by selling the knitting also collects money for charity.

That turned out to be a realistic enterprise when in late 2014 Mrs Seaman made a replica of her husband's koi pond in the garden of her former home and she by displaying this replica in various places managed to collect about £ 12.000. 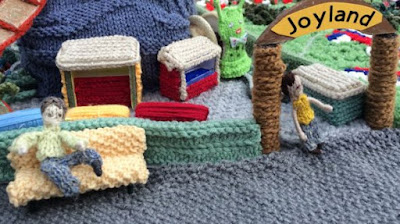 one more part of the Great Yarmouth set

The koi pond was still a relatively small project compared to a subsequent project that Mrs Seaman undertook. This became a replica of Great Yarmouth's Golden Mile (also Marine Parade), as it was in the 1970s, a beach side promenade with sea views and all kinds of entertainment and facilities for food and drink.

The replica would become 4 meters long. It includes a variety of scenes, some of which are shown in the images above. Where the koi pond project already took four months of work, the Great Yarmouth project has taken a year of work, and then it has to be noted that Mrs. Seaman is not afraid to spend twelve to fifteen hours a day on her hobby.

Characteristic of Mrs Seaman's work is that she tries to depict the buildings and other items as realistically and faithfully as possible. To this end, she consults photos in magazines and other publications. 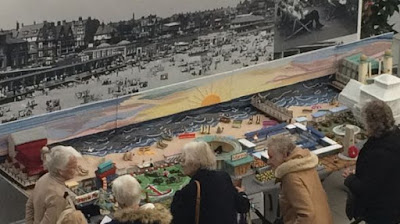 
The set was displayed at a craft exhibition in February 2019 in the Forum in Norwich, a community building with a variety of facilities for the public, such as a library, a tourist information center, facilities for (art) exhibitions, amateur theatrical performances, and so on. The exhibition yielded £ 13,000 for charity.

As the picture above shows, before it was exhibited in the Forum, the set could also be visited in Mrs Seaman's home.

In July 2019 Mrs Seaman started a new project, a replica of the Sandringham House. Located in the village of the same name, 60 km north west of Norwich. this estate is the favored holiday home of Queen Elizabeth II. 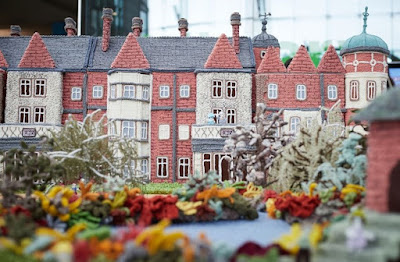 The miniature version of this ages old royal estate that Mrs. Seaman worked on for six months,
is 3 meters long and 2 meters wide.

In this replica Mrs Seaman once more ensures that the dimensions and color scheme of the building correspond as much as possible to reality.

The miniature scene also partly includes the landscaping that surrounds the property, with lawns, trees and a lake, all together a variety of miniature items, all added in knitted or crocheted form. 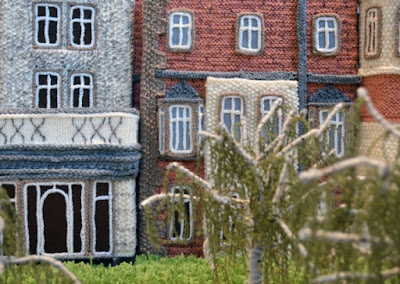 this picture and the next one by Forum

The photo above shows in some detail how a tree with green leaves takes shape in a miniature wool version.

And the picture below shows Queen Elizabeth II and her husband Prince Philip as they appear in the miniature version of their country house (Mrs. Seaman was assisted by a friend in the making of the depictions of persons). 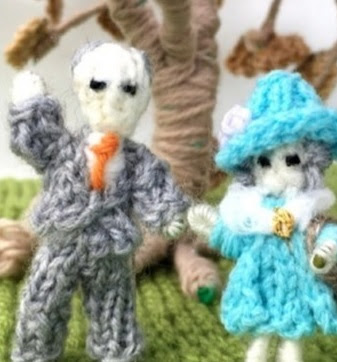 The miniature version of Sandringham House has been exposed at the Forum in Norwich from February 8-23, 2020. It closed just one month before in the United Kingdom on March 23, 2020 the lockdown due to the Corona virus was effected.

In the United Kingdom the coronavirus pandemic has sparked some specific private actions to raise money for the hospitals of the National Health Service.

Mrs. Seaman is participating by creating a new miniature scene, this time a model of what is called the Knittingale Hospital. 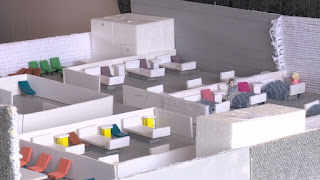 The photo shows a very early version of this miniature. It will include four wards and an x-ray department, but also a coffee corner and who knows what other items are being invented while working. The collected money, also welcome via website JustGiving, will be donated to three hospitals in the region.

The final creation will be presented in the Forum when it is reopened.