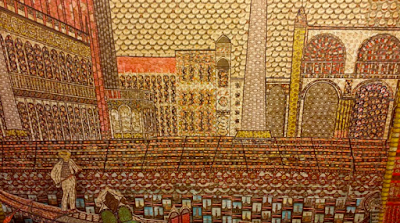 The above image of a gondola in Venice, which was created by adding the medallions of cigar bands to a panel, once was part of the attic of a house in the old center of the Dutch village of Volendam. In the 1950s the site became known as the Cigarband House.

This rather specific art environment was created by Nicolaas Molenaar (1894-1964). He was the middle child in a Volendam family and had three brothers and three sisters.

Growing up in a Catholic environment, after his primary education Nicolaas went to a monastery, where he stayed for many years until he left it in the early 1940s. 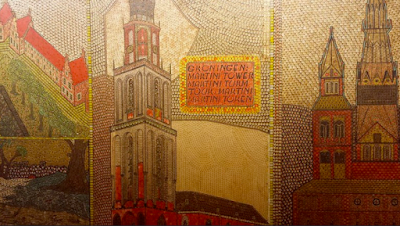 Martini Tower in the City of Groningen, Netherlands

Molenaar returned to live in Volendam and in June 1944 he married Grietje Tuyp (1896-1981), who was also a former monastic (she had joined the monastery after her fiance drowned while fishing at sea). Their marriage remained childless.

The couple lived in a house in the old center of the village, a neighborhood with narrow streets and rather haphazardly situated authentic houses, which is why it is also referred to as Doolhof  (Labyrinth). 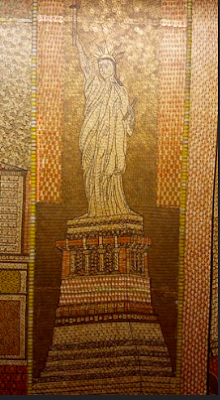 To provide for income, Molenaar sold eels from home.

As a hobby he collected cigar bands and in 1947 he came up with the idea to make decorations with these bands and to display these in the attic. Once started with this project, it became an activity that never left him and on which he worked with unbridled commitment.

Molenaar cut off the ends of the cigar bands and glued the medallions on boards, arranging these into the representation he had in mind and in a pencil sketch already had prepared on the panel.


After a while the collection had grown to such an extent that it became known in the village and people wanted to come and see it. Molenaar thought that was fine, and the arrangement became that people were allowed to take a look in the attic if they also bought a portion of eel

The project was well received by the inhabitants of Volendam. In any case, this applied to the Volendam children, because in order to get enough material, Molenaar gave a few cents to a child who brought a box full of cigar bands. 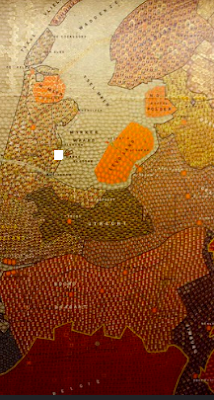 map of the northern part of the Netherlands,
the white square (added by the editor of this post)
indicates the location of Volendam

One of the decorations in the Cigarbands House is above map of the northern part of the Netherlands. It shows the large inlet of the North Sea on which Volendam is located.

In 1932 the Afsluitdijk was completed, an enclosure dam 32 km long and 90 meters wide (the not so easy to identify yellow line in above map). This had major consequences for Volendam, that traditionally had a lot of saltwater fishing. Postwar developments have also resulted in only a limited number of boats currently remaining from Volendam's once sizable fishing fleet. 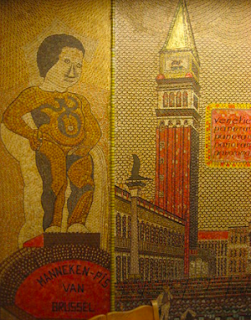 There are images of internationally known structures such as Saint Peter's Basilica in Rome, the Tower of Pisa, the Big Ben in London, the Cathedral in Cologne, the Statue of Liberty in New York.

But he also depicted Dutch buildings such as windmills, the Water Tower in Sneek, the Martini tower in Groningen, the St Vincentius Church in Volendam and the Basilica of Saint Servatius in Maastricht. 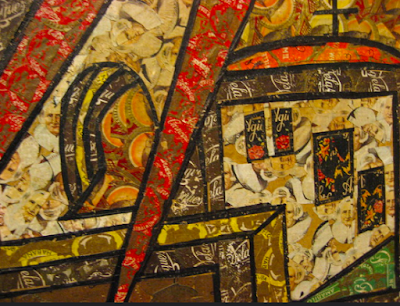 Molenaar also looked into completely different themes, such as all Volendam football players who in 1959 for the first time promoted to the premier league, all provincial arms of the Netherlands, the Dutch royal family with (the current king) Willem Alexander as a baby on the arm of his father prince Claus, maps of the Netherlands, and Manneken Pis in Brussels.

There are also images as above and below with black outlined scenes, for which the ends of the cigar bands were used. 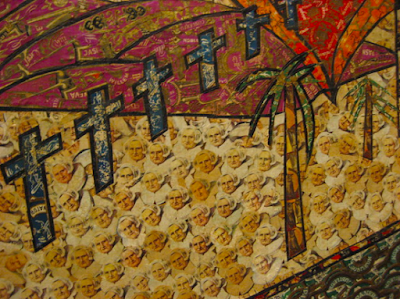 After Nico Molenaar died on May 13, 1964, the entire collection, meanwhile including some 7 million cigarbands, was taken over by a neighbour, Jan Sombroek, who installed the collection in his own house.

In the 1960s in Volendam the arrival of international tourists started to increase and Sombroek and his wife Jannig Karregat have done a lot to transform the collection into a tourist attraction. 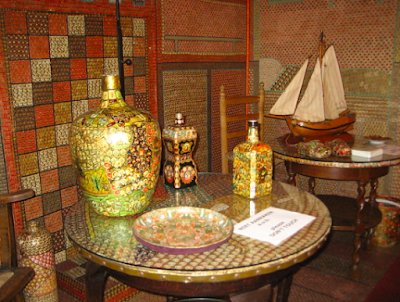 In December 1993, the Volendams Museum bought the collection.

Volunteers carefully refurbished the panels as necessary and on May 5, 1995 the new museum hall was officially opened.

In 2017 the museum submitted an application to register Cigarbands House in the Guiness book of records. In this context also a promotional film was made (see documentation)

Documentation
* Website of the Volendams Museum
* Article (April 2019) on weblog I Becoming Dutch
* Article (June 2017) in regional journal Groot Waterland
* More pictures of the creations on Flickr, by Leslie Gardner and by Allisson
Videos
* Video on Instagram showing the decorated panels as exposed in the Volendams Museum

* Video (2013, YouTube, 3'31") by madeleinepa3cuz, showing the setup of the panels with cigarbands in the Volendams Museum

former location of the Cigarband House

Email ThisBlogThis!Share to TwitterShare to FacebookShare to Pinterest
Labels: interior decorated with collages