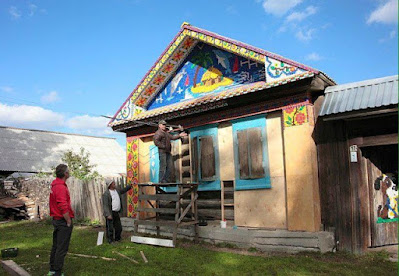 Shurala is a small community of some 450 inhabitants in the Sverdlovsk region in Russia, some 90 km north of Yekaterinburg and as the crow flies about 20 km from the village of Kunara, where Russia's most famous art environment is located, the decorated house of the blacksmith Sergey Kirillov.

The community of Shurala is not only known for the monumental church building in the center of the village, built in the early 1900s, a structure with five domes and a church tower. But the village also surprises visitors with no less than two houses with a colorfully decorated exterior, one made by Anatoly Komlev and another by Vladimir Serebryakov, whose creation is reviewed in this post.

Born in 1959 Vladimir Nikolayevich Serebryakov in 2012, so when he was in his early fifties, began decorating the exterior of his house.

He had no training as an artist and he was not really involved in art either. The idea of decorating the house came spontaneously when he saw pictures of embroidery in a magazine of his daughter and thought that he could make something similar, using colored bottle caps. 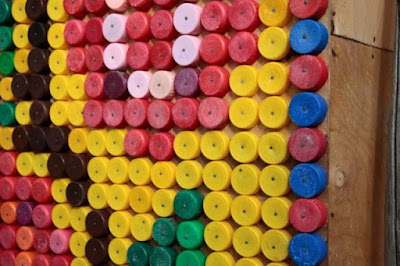 The picture above shows that the colored bottle caps are attached to the wooden base with a nail.

Actually, these nails are the only material that comes at a cost. The caps are in principle available for free, but large numbers are required, about a thousand pieces per square meter of wall. 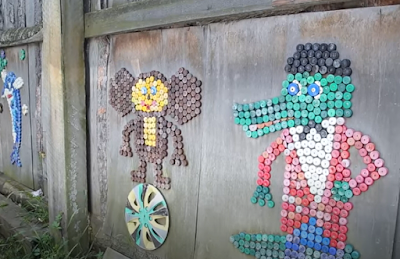 In an initial phase of the project, Serebryakov added creations which refer to Russian fairytale characters, as in above picture. 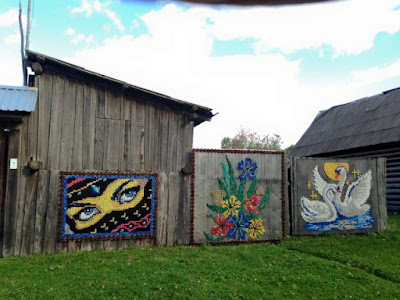 Then Serebryakow began working the fence next to the house.

The picture above shows three of the around five somewhat more complex creations he added to the fence, a mysterious oriental princess on the left, an assembly of flowers in the middle and two swans on the right. 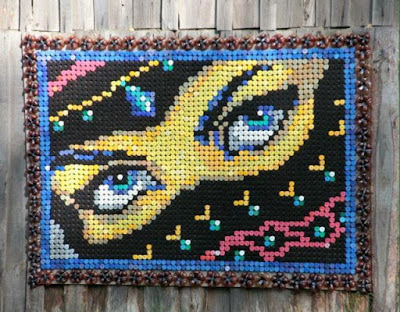 an image on the fence in detail

Later Serebryakov began decorating the front of the house, starting with the top part.

The first picture in this post shows how far decorating the front side had progressed in 2017. 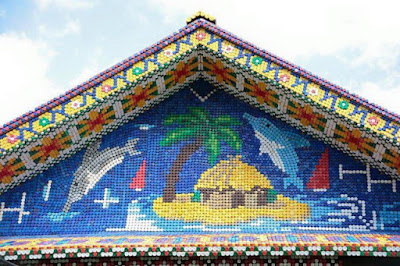 The upper part is already finished. It includes a decorated roof molding.

And the triangular space below the molding has a scene with two large fish (dolphins?), an island with a palm tree and a cabin and two sailing boats on the water.

The picture below gives an impression of the decorated facade, with at the bottom images of two colorful waterfowl in a wetland environment

Around the end of 2018, Serebryakov considered his creative activity as complete. 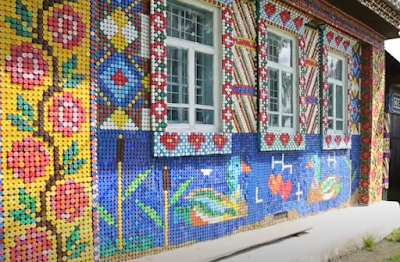 Documentation
* Article (September 2015) in regional journal E1.ru, with a variety of pictures
* Website Uraloved has an article (2015) about Shurala village with two pictures of the site
Video
* Video (July 2017, YouTube) by Настоящее Время, the part about the decorated house
starts at 8.27

Vladimir Serebryakov
House decorated with bottle caps
st. Sovetskaya 51
Shurala, Sverdlovsk region, Russia
can be seen from the street
the site is located along the same street as the Temple,
but more to the south
Posted by henk van es at 8:25 PM