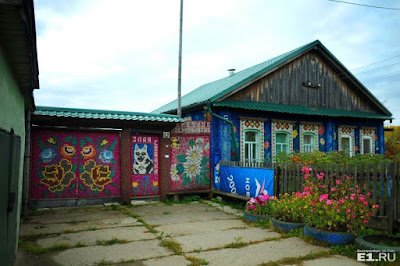 this picture and the next two
from regional journal E1.ru

Shurala is a small community of some 450 inhabitants in the Sverdlovsk region in Russia, some 90 km north of Yekaterinburg and as the crow flies about 20 km from the village of Kunara, where Russia's most famous art environment is located, the decorated house of the blacksmith Sergey Kirillov.

The community of Shurala is not only known for the monumental church building in the center of the village, built in the early 1900s, a structure with five domes and a church tower. But the village also surprises visitors with no less than two houses with a colorfully decorated exterior, one created by Vladimir Serebryakov, the other by Anatoly Komlev, whose creation is reviewed in this post. 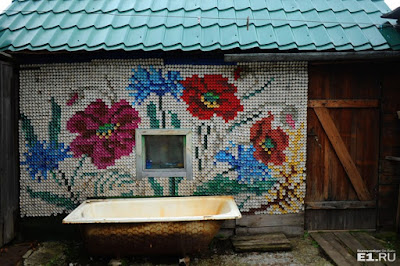 Anatoly Stepanovich Komlev, born in 1949, became an employee of the Russian railways. In the late 1990s as a station worker he was transferred to O.p. 419, a stop near the community of Shurala on the rail link between Yekaterinburg and Anatol'skaya.

Aided by a neighbor, in a year's time he built his own home on the premises of the train stop. 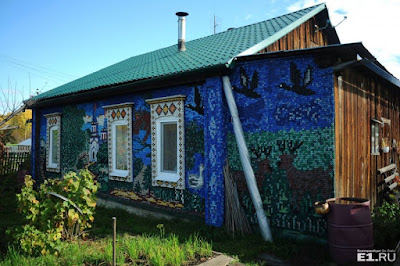 At the suggestion of the neighbor's wife, Vera Zinovieva, in 2001 Komlev started decorating the house with colorful bottle caps. according to drawings for embroidery Vera had sketched on a wall.
It became a project that would keep Komlev active for about fifteen years.

Almost all walls of the house and outbuildings have been decorated with often man-sized  colorful decorations made of bottle caps. There are various images of flowers, but also of a rooster, a dog, a lake with ducks....

Around 2016, when Komlev was in his late sixties, he decided to terminate the project.

Anatoly Komlev
House decorated with bottle caps
at the premises of train stop O.p. 419
near Shurala, Sverdlovsk region, Russia
can be seen from the street
Posted by henk van es at 8:26 PM