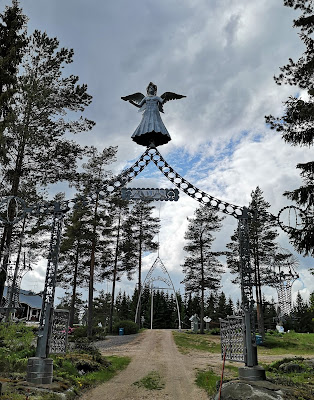 Located in the wooded area around Riihikoski, a small hamlet in the south west of Finland, there is an art environment with a variety of metal sculptures:  Kyösti Iitti's Angel Park. 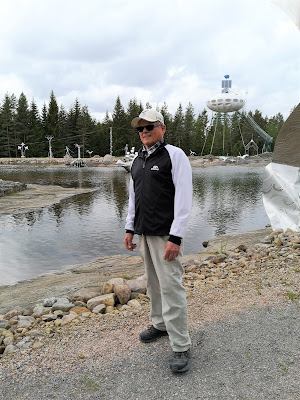 Born June 8, 1948, Kyösti Iitti after his primary education first had a job as a woodworker and later got a training at a shipyard in Turku, some 40 km south-east of Riihikoski, where he then worked for about ten years as a welder and sheet metal worker.

Because of problems he had with asthma he had to find another job, and so in 1988 he became a massage therapist, a job he had until 2007. In that year, in his late fifties, he had to retire early due to problems with his back.


Once retired, he and his wife settled permanently on the grounds in the woods, where the couple had a summer cottage and where later his art environment would develop. 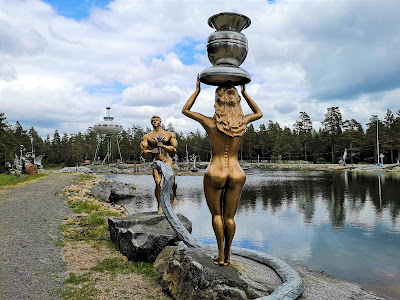 Adam and Eve with the snake
tempting them to eat the "forbidden fruit."

His first metal creation was a postman on a bicycle loaded not just with mailbags, but also with a mobile letterbox, a sculpture that was installed at the premises of the summer cottage.

Other sculptures followed, and in 1988 the collection as it had been formed until then was opened to the public. Incidentally, Iitti was reluctant to publicize the site and there are also no signposts pointing to its location. 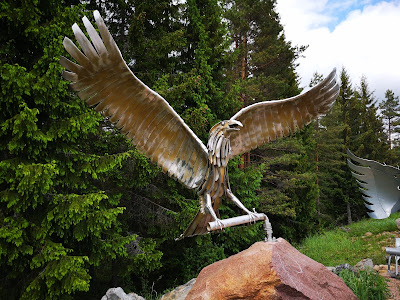 In the early 1990s Iitti transformed part of the area around the house into a half-acre lake, which became a distinct image-defining element of the site.

The sculptures are partly arranged around this lake, and partly in the adjacent 5 ha forest. Currently (2020) the collection includes some fifty sculptures. 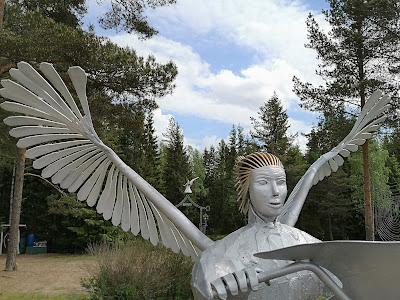 Just a many other creators of art environments, he does not work on the basis of pre-made sketches, but he is guided by the shape and characteristics of the material he has available.

The site is named after an angel that dominates the entrance gate of the park. This angel pays homage to a brother of Iitti who died at a young age

Iitti's sculptures often make a robust impression and they are usually man-height, and in some cases even more extensive. 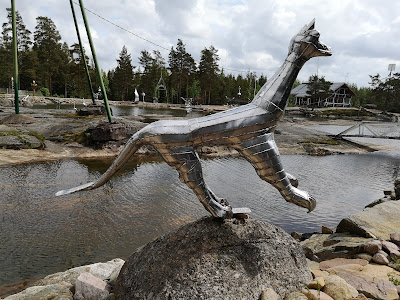 There are various depictions of animals, such as the deer named Oskar, the bear with the name Karhu made of welded chains, an eagle, a large fish consisting of an iron tail attached to a large piece of stone excavated during the making of the lake ....

There are sculptures of humans, a weightlifter, a skeletal type, a carnival figure, a long-haired beauty on a rock..... There are  ornamental elements, the lake  includes a three-master.....it is a burst of creativity in iron and stainless steel.

And then there also is a marked life-size structure made of fifteen boilers, cut open and welded together, covering a stage where (music) performances take place.

Another eye-catching life-size item of this art environment is the UFO-like structure rising up on  iron supports, overlooking the lake.

This structure, purchased by Iitti in the early 1990s, is named Futuro House. It was conceived in 1968 by Finnish architect Matti Suuronen as as a quick to assemble and disassemble housing made of polyester plastic reinforced with fiberglass. A number of these Futuro Houses have been sold, but the concept as such has not been widely accepted. 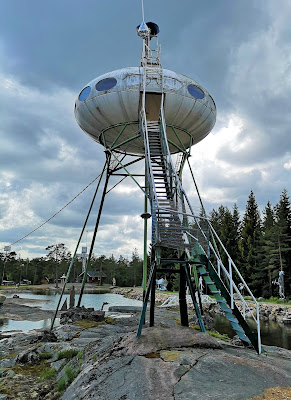