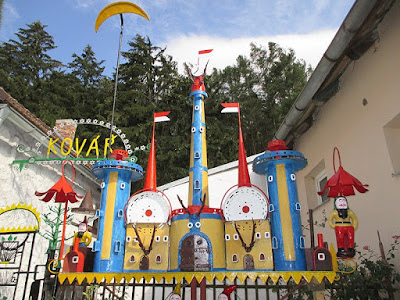 The picture above shows the entrance of a forge (Kovár means blacksmith) in the small village of Hradiště in the south-west of the Czech Republic. The local blacksmith transformed the area around house and workshop into an art environment that mainly included miniature iron creations, a site consequently often referred to as Iron Kingdom.

After his primary education, he worked for twelve years on a collective farm, where he learned professional craftsmanship from experienced blacksmiths. 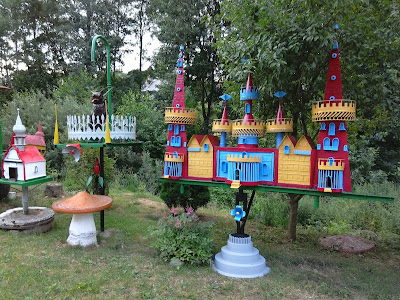 Then, in the 1930s, Lehečka settled as a blacksmith in Hradiště, mainly oriented towards supporting farms, first with shoeing the hooves of horses, later with maintenance and repair of agricultural implements.

At some moment in his professional life as a blacksmith, he decided to use the remains of the material he incorporated in his work as a basis for items to decorate the space around house and workshop.

The internet has only limited information about Lehečka's life and work, so there are no data about the year in which the construction of this art environment started. It is possible that in addition to the busy job he had as a blacksmith, as early as the 1930s and 1940s he already made items,  this in connection with the assumption that - as usually in the field of art environments - the majority of his work was realized at a later age, in the 1950s and 60s. 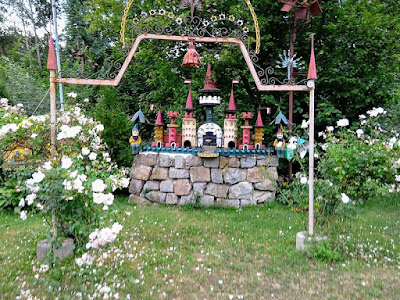 Lehečka's creative production has a distinct, recognizable character, especially as regards the castle-like structures with their slender, pointed towers, often provided with circular platforms with battlements.

The structures formed from steel plate, often arranged in coherent configurations and situated on supporting metal, wooden or stone elements, are graced by gnomes and other (fairy) characters.

In addition, there are self-contained items, such as houses, but also high-rising metal uprights with a specific presentation at the top. An example is the kinetic creation of a wheel with blades driven by a character in black clothes, as can be seen in action in the beginning of the video (see documentation). 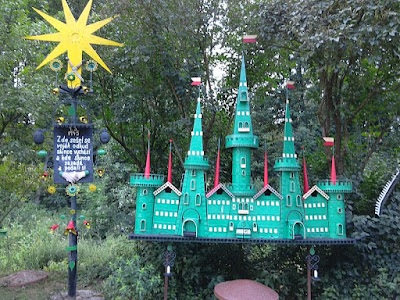 Another example is the pole on the left in the picture above  This is a reminder of a historic event in 1945 when at the end of the second world war Russian and American soldiers met in Hradiště.

The inscription on the shield says: "Here, on May 9, 1945, an American soldier met a Russian soldier and shook his hand " 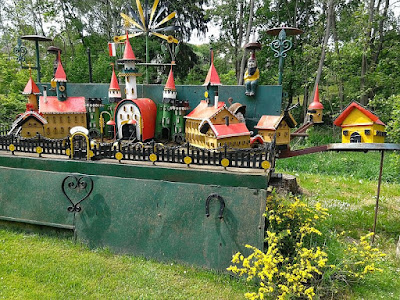 After his death, his son Miloš took on the task of taking care of the maintenance of the site, that contains some fifty distinct creations, which -as the photos and the video show- are still in good condition nowadays. Because Milos now is getting older it becomes increasingly difficult to continue the maintenance. 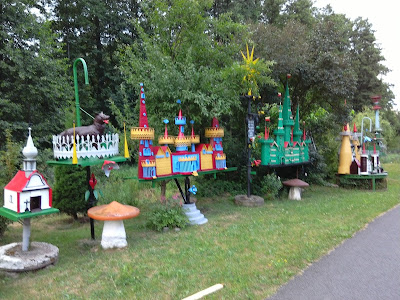 * As mentioned earlier, the internet has only limited information about Lehečka's life and work. The main source is an article on the municipal website of Hradiště, which in addition to the text, has a series of photographs provided by the family.
Video
* Video by Pavel Konečný (2020, 7'00", Facebook)