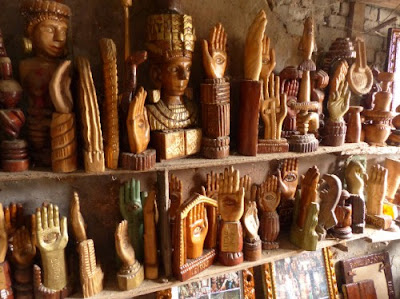 The wooden sculptures depicted in above picture are part of collection of some 400 wooden creations kept indoors in a workshop that's part of a house in the community of Ailly-sur-Somme, France.

Also due to the manner of presentation, this extensive collection of wooden sculptures, created by José Leitao (1938-2020), can be seen as an art environment. 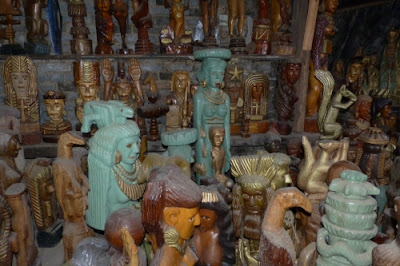 Born in Portugal, Leitao emigrated to France in the 1960s. He settled in Ailly-sur-Somme, a community a few kilometers west of Amiens, where he got a job at the Carmichael company, a weaving factory that since 1841 had been located in this community.
Leitao, who was now married, worked at this company for over twenty years, until in 1983 the weaving mill ceased to exist and all 500 employees were fired.
Now approaching 50 years of age, Leitao -like many of his colleagues- didn't succeed in finding a new job. 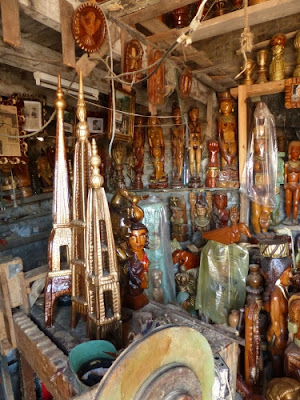 Not intending to spend his days idle, he began to make wooden sculptures. This became an activity that would keep Leitao busy for many years to come.
Leitao used the house's garage as his workshop. A sign above the garage entrance from the street said that Casa Leitao was located here.
Here Leitao worked steadily on an increasingly extensive collection of wooden sculptures, which he arranged on shelves along the wall.
As the pictures show, the creations are mainly about 40 to 50 cm high, although there are also several somewhat larger ones, occasionally around a meter high. 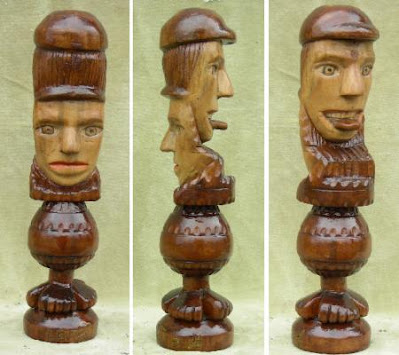 There are many busts, both of male and female characters, often with an impressive head of hair, a wig, a crown, a hat or another head covering. 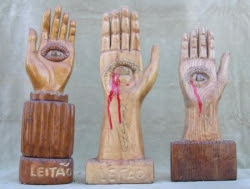 A striking feature of the collection is a large number of depictions of a raised hand, sometimes with a palm that has an eye, which may have to do with the hamsa, a popular amulet in the Middle-East. 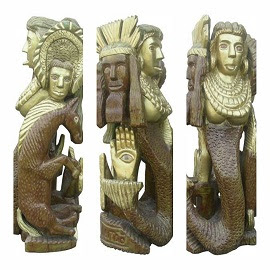 Leitao also liked to make sculptures with a combination of faces, animals or hands, as shown in above depicted series. Some of his sculptures arouse an association with cultures such as those of Indians or of pharaohs in classical Egypt. 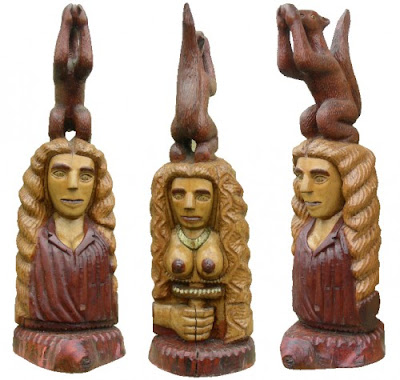 The sculptures, as in above picture, have rather naturalistic depictions of male or female characters, but then an animal has been added to the heads, what results in a combination manifesting itself in such a way that both humans and animals seem to regard this as the most natural thing in the world.
The images above give only a limited impression of Leitao's creations.
More images can be seen on an album made by Laurent Jacquy, who lives in nearby Amiens, and was impressed by Leitao's work. With the album he wanted to start a photo-documentation of this oeuvre.
The sculptures, hidden as they were in a garage of a private house, gained little fame during Leitao's lifetime.
He will have been known locally, because the local press may have paid attention to him and in 2014 (from March 14-April 7) there was an exhibition in the former Carmichael factory, where Leitao was among the artists presented. 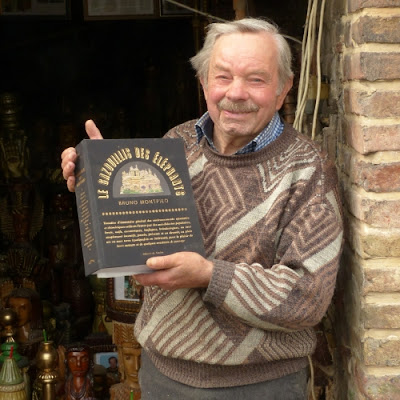 But then, what may have most appealed to Leitao, through Laurent Jacquy the French publicist in the fields of outsider art and art environments Bruno Montpied in 2010 came to visit him, which resulted in a review of his ensemble of sculptures in Montpied's extensive documentation and inventory of French art environments Le gazouillis des éléphants (2017).
On September 13, 2020 José Leitao died at age 82
Documentation
* Laurent Jacquy has posted various messages about Leitao and his creations on his weblog
Les beaux dimanches, September 2020 (death of Leitao), May 2018 (Leitao with Montpied's book), June 2015, September 2013, September 2011,  April 2011 (first visit)
* Album with photos by Laurent Jacquy of Leitao's sculptures
* Article (April 2011) by Bruno Montpied on his weblog
* Review in the inventory of art environments in France by Bruno Montpied, Le gazouillis des éléphants, Paris (Éd. Du Sandre), 2017
José Leitao
Casa Leitao (Indoor arrangement of sculptures)
Rue Jean Catelas 128
Ailly-sur-Somme, dept Somme, region Hauts-de-France, France
(there is no info available about what wil happen with the collection)
streetview 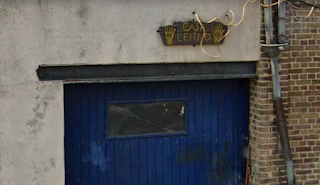