The house still exists, but nothing more reminds of the period between the 1950s and 1990s when it was inhabited by a self-taught artist who transformed the building into an art environment.
This is the story of Achille Grimonpont, who all his life lived in the community of Halluin in Northern France, and became well known as Chilot who lived in a self-decorated museum.
Life and works
Achille Grimonpont (May 4, 1904 - September 16, 1993) was born in a family with nine children.
It was a pleasant family, with regular parties where people were singing and making music.With his two brothers Paul and Augustin, Achille would form a singing group that stayed together throughout their lives. 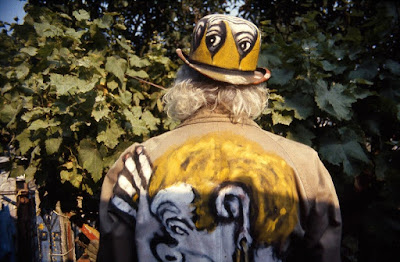 At a young age, Achille already showed an artistic talent.
He told Francis David, the photographer of the pictures in this post, who visited him in the 1980s, that during a walk with his father in a nearby park, he found a piece of wood. While walking he worked it with a knife, a processing that to his own surprise revealed a human form in that piece of wood.
During the following days he made more wooden sculptures, which were displayed on the buffet in the living room of the family.
In this respect it is equally interesting that Grimonpont during his military service in the 1920s regularly sent letters to his parents, which were invariably provided with all kinds of drawings.
However, the artistic activities in his youth did not lead to an art education.
Not much is known about his life up to the 1950s, but it must be assumed that Grimonpont all those years has continued to honor his love for drawing and making sculptures. 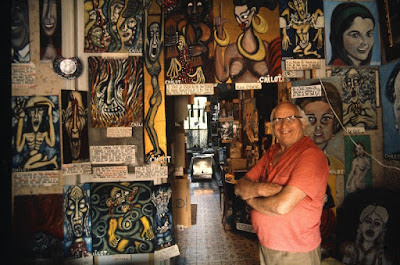 When Grimonpont's parents died in the 1950s all his brothers and sisters already had left the parental home and he now lived entirely alone in the house on the rue de Lille.
So he had plenty of space to attach his drawings to the wall and situate his sculptures, but what's more, he also started painting all parts of the interior, walls, doors, but also all kinds of household goods, pots, bottles, furniture.
As the pictures in this post show, there wasn't an object in the house that wasn't painted. 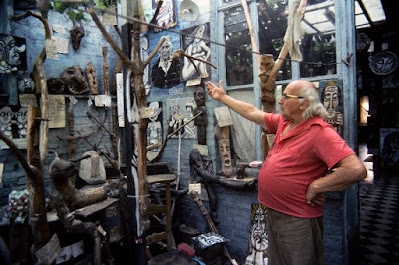 Thus, over the years the house turned into an art environment, acting as a kind of museum, since Grimonpont had no difficulty in receiving visitors.
On the contrary, Grimonpont liked it when his home was considered an attraction. Children and college students were especially welcome and he liked to reminisce. 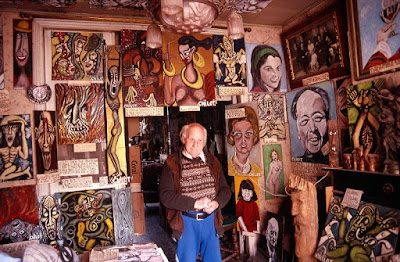 In the 1970s and 1980s Grimonpont became a well-known personality, often referred to as Chilot, a name his mother  used as a pet name.
His fame in his hometown was partly due to the way in which he regularly crossed the city, namely in colorfully decorated clothes, shoes and hat, riding a painted bicycle, searching for things that could be used to further decorate his house.
But for another part he became known because of the interest shown first by the regional press, and later by national media, especially French and Belgian TV, for both his humorist and ironic personality and his out of the ordinary museum. 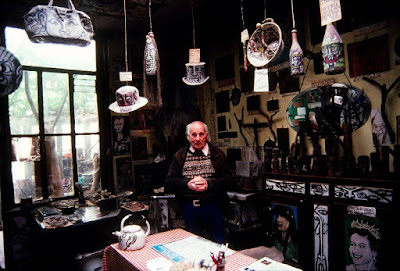 In the late 1980s Grimonpont's health deteriorated and he closed himself off from the outside world.
One more time he would be among the public when the municipality of Halluin in June 1991at the Centre culturel Albert-Desmedt organized an exhibition in his honor, showing more than 2000 everyday objects, drawings, cardboards and carved woods.
Achille Grimonpont, also known as Chilot, died September 16, 1993.
The house was emptied and sold and today at the address in the rue de Lille nothing reminds of Grimonpont
Documentation
* Francis David, Guide de l'art insolite: Nord/Pas de Calais, Picardie. Paris (Herscher), 1984 -93 p, ill
*.La maison d'Achille Grimonpont, dit Chillot, entry on the website Habitants Paysagistes (Lille Art Museum), with a series of pictures and other documentation
* Website of ARPH, the Association that researches the past of te community of Halluin, with a variety of newspaper articles, pictures and drawings documenting Grimonpont's art environment
* Entry on weblog Brandodean, with texts (2007) about the brothers Achille, Augustin and Paul Grimonpont
* Entry in the inventory of French art environments by Bruno Montpied, Le Gazouillis des Éléphants, Paris (Eds du Sandre), 2017
Preserved works
*The association A la recherche du passé d'Halluin (In search of Halluin's past) preserves over 200 of Grimonpont's works
Other expositions
* Retrospective of the works of "Chilot" at La Galerie, 51 rue Maurice Simono, Halluin (October 12-21, 2012)
Achille Grimonpoint (also known as Chilot)
House transformed into a museum
193 rue de Lille
59250 Halluin, dept Nord, region Hauts-de-France, France
this site doesn't exist anymore,
all decorations of the house have been removed
streetview
Posted by henk van es at 7:29 PM