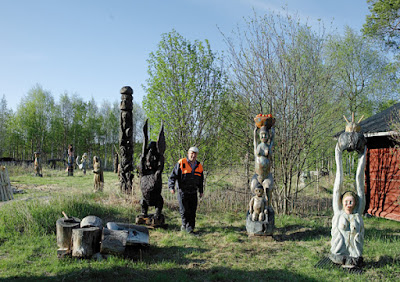 picture courtesy of Finnish photographer Jorma Luhta
Above depicted site with a variety of totem-like wooden sculptures is located in Sarakylä, a small community in Finland, part of the municipality of Pudasjärvi, some 60 km south.
Life and works
This art environment was created by Eero Leinonen. He was born in Sarakylä in 1938 and would spend his entire childhood there.
In later life, in 2012, he wrote a self-published book entitled Mennen ajan elämää Livojokivarressa (Going through life on the Livojoki River), in which he speaks clearly about the concerns he has known in his youth. 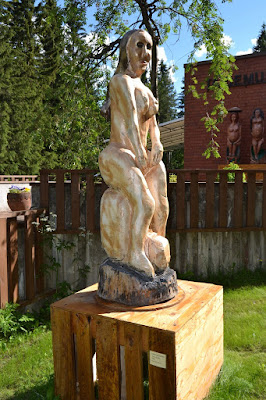 a girl seated on a stone (2009)
this picture and the next two by Eero Paso
from his collection on Pinterest
After the primary education in his native village, Leinonen received a technical vocational training at the Northern Ostrobothnia Vocational School in Taivalkoski, some 70 km east. Then he had a job at a company printing newspapers and got married in the late 1950s.
After a number of the years, Leinonen developed a severe allergy to printing ink. He had to stop working and received a disability pension.
At that time or some years later, Leinonen and his wife Hilja moved to Sarakylä where they went to live in a house located in a wooded area, about five kilometers from the village. 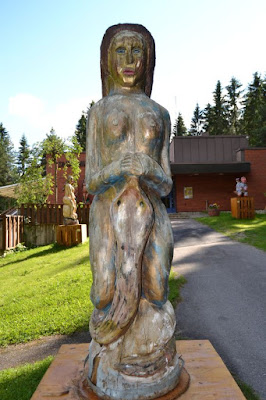 a girl holding a snake (2000)
Leinonen's activity as a sculptor began in 1998, when he was entitled to a retirement pension.
How it all started exactly also remained unclear to Leinonen himself. He has said that somehow he was inspired by a tree in a neighboring forest. It started to grind in his head, he appropriated the tree trunk, took an ax and an angle grinder and while working, under his hands a woman appeared carrying snakes in a basket.
After that there was no more stopping.
Working mainly with pine trees from the neighboring forest, Leinonen continued to make sculptures, which because of their origin from tree trunks often evoke an association with totem poles. 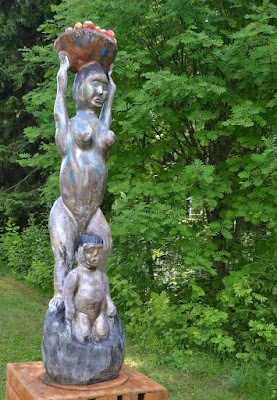 fertility (2005)
Leinonen's art environment includes a varied collection of sculptures.
There are a number of portrayals of female characters, such as the creation depicted above called Fertility, showing a woman carrying a basket of fruits, with a small child at her foot.
These sculptures of women are executed in a realistic style, which also applies to the depictions of male persons, which are sometimes depicted with a rake, a spear or similar item. 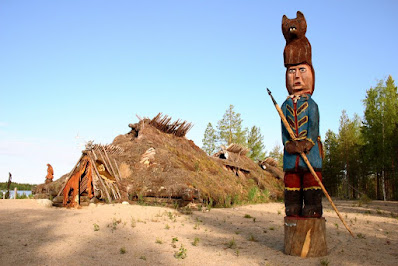 picture (2007) by Lauri Oino,
Maaseudun Sivistysliitto (Association of Rural Education)
There are also sculptures of animals, and these often have a more imaginative expression, such as a grinning fish with large teeth.
A special feature of the collection is that due to the color scheme and the addition of specific elements, some sculptures evoke an Indian connotation. For this Leinonen has no explanation, the subjects simply appear in his head.
Documentation
* Article by Erkki Pirtola on website ITE-net
* Article (July 2007) by Jukka Turunen in Finnish newspaper Kaleva
Eero Leinonen
Sculpture garden
Sarakylä, Pudasjärvi, Northern Ostrobothnia, Finland
streetview 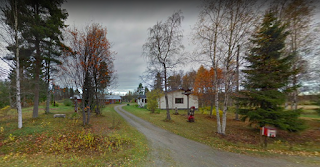