In the early Middle Ages the European countryside had Donjons, fortified residential towers. These buildings developed into Castles by adding walls and buildings. and such sites were often equipped with round towers with battlements.
Both donjons and castles were not only intended to resist the enemy, but also to dominate the environment, not just the landscape, but especially the workers and peasants living around.
In the field of art environments it occasionally happens that someone feels inspired to build such a donjon or castle. Such a building is not meant to control the surrounding area, but to express the feelings the creation entails, such as memories and appreciation of building methods in earlier times, performing an act against contemporary architecture, or simply the urge to build something beautiful.
Consider the story of Gregorius Halman, who single-handedly built a castle in the Frisian countryside in the Netherlands, or experience what motivated Didier Lobert when he (also single-handedly) built a donjon in Saint-Germain-sur-Avre in Normandy, France.
Looking at the image above, the depicted building, as it stands in the green landscape, appears to have been built mainly because of its beautiful appearance. It's dominating the environment in a peaceful, decorative way. 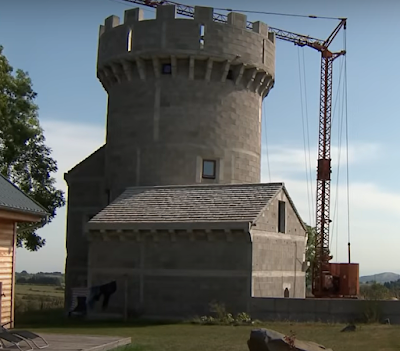 Life and works
The building in question is a single-handedly built creation by Laurent Mercier, located in the small hamlet Mareuge, part of the municipality of Vernet-Sainte-Marguerite, in the heart of the volcano rich area near Clermont Ferrand in France (Parc des Volcans d'Auvergne).
Mercier, about whom the internet hasn't biographic information, started building the castle in 2013, a project he would devote all his free time to.
Interviewed by regional television in September 2020, he said he believed he would need three more years to complete the project. 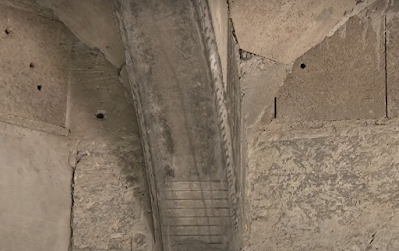 Although Mercier uses contemporary materials, he makes every effort to do this in such a way that an atmosphere of earlier times is created. For example, floors haven't been made of poured concrete, but of tiles that have been shaped one by one by hand.
The same goes for the vaults. These were made according to the same principles as in earlier times, first the arches were made and between them blocks of cement were arranged in such a way that they appear to be stones.
The fact that Mercier decided to build a vault says something about his motivation with regard to constructing the tower. A vault cannot be seen from the outside, so he could also have made a a less laborious foundation to support the tower.
But in an interview he said: A castle without a vault, that was not conceivable, which indicates that his creation was based on appreciation of building methods in earlier times. 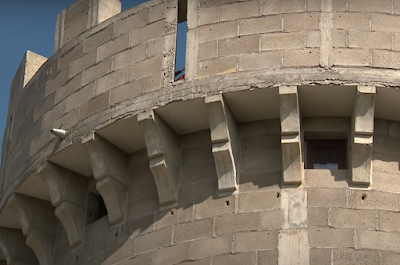 The tower was completed in the summer of 2020.

When around 2023 the building will be completed in its entirety, Mercier intends to use it as a gite.

Now that it is clearly visible that this building is a castle, more interested visitors come along, most of whom show appreciation for the project. Regional newspapers and TV also showed their interest.

Until now the castle has no name. The designation Castle dominating the upper Monne valley ¹ is fictitious and only indicates its location.

Documentation
* Article (September 2020) in newspaper The Epoch Times
* Article (September 2020) on the website of France 3, ed Puy-de-Dôme
Video
* Video by France 3 TV Auvergne-Rhône-Alpes (September 2020, YouTube, 2'22")
note
¹  The Monne is an approximately 35 km long river that has its source in the Puy-de-Dôme, near the \Col de la Croix-Morand, above the hamlet of Mareuge and flows into the Veyre river.
Laurent Mercier
Chateau
63710 Hameau de Mareuge,
Le Vernet-Sainte-Marguerite, dept Puy-de-Dôme, region Auvergne-Rhône-Alpes, France
can be seen from the road
Posted by henk van es at 7:14 PM