Twelfth anniversary of this blog 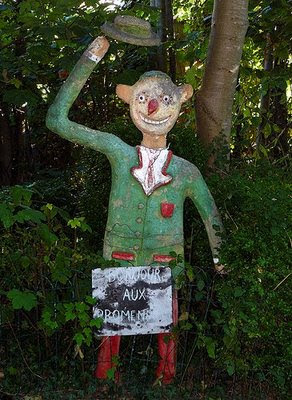 Bonjour aux promeneurs, Hello walkers
picture of a sculpture by Fernand Châtelain
courtesy of Marcello 13 (Flickr)
Today, November 11th, 2020, this blog has existed for twelve years and it now includes descriptions of some 500 art environments in Europe. As in previous years I will relate here data (as of November 10 and 11) about numbers/origin of visitors and about most viewed art environments.
Number of visitors
On November 10th, 2020 the all time number of visitors was 890.062. On November 10th, 2019 it was 819.622, so there is an increase of 70.440 visitors, or on the average 193 visitors a day.
Over the period 2018-2019 the average was 175 visitors a day.
All time page views by country
As in previous years here is the all time rank of top ten countries as regards page-views (as on November 10):

The top ten list includes the same countries as in 2019, almost in the same order, except Italy and Russia which changed places. Italy is still on the rise: 9 in 2017, 8 in 2018, 7 in 2019, 6 in 2020.
Once more the interest from Ukraine and Poland in Eastern Europe and Russia is lasting.
Most viewed sites all time
These are the sites with the most all time views (as on November 10th):

The first place for Bill and Elisabeth Charge has to do with a one time event. In October 2016 the husband of a granddaughter of Bill and Elisabeth posted a message on the Watford Memories and History page on Facebook, asking -with a link to the relevant post in this blog- if anyone remembered the sculpture garden, that was demolished by the housing company soon after Elisabeth had died.
Thousands of people did remember the site and this resulted in over 5000 hits of the post in a few days time, which meanwhile has grown to over 6300, a number that no other site has been able to surpass until now.
For the rest, the top ten list continues to include the same names as those of previous years, compared to 2018 almost in the same order: Robert Garcet from Belgium. Facteur Cheval, Robert Tatin, Bodan Litnianski, Abbé Fouré and Chomo from France and José Maria Garrido, Francisco Grajera and Joseph Pujiula from Spain.
Russia and Eastern Europe
In the autumn of 2014 I began paying special attention to tracing art environments in Eastern Europe and in the European part of Russia (the area west of the Urals). In particular in Russia until now I found some 50 sites that so far mostly were unknown in the Western-European field of art environments.
Here is an overview of sites in Russia with an all time number of visitors above 1000:

The art environments in Eastern European countries in general are already better known in Western Europe. Here is an overview of sites in the Czech Republic, Poland and Ukraine with an all time number of visitors above 1500:

Of course, above listings are just meant to give an idea of the focus of the visitors who visit this blog.