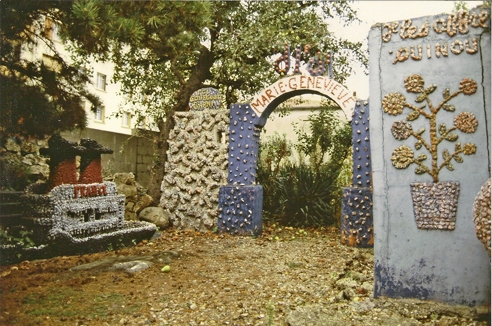 part of Lellouche's "Petit Musée" as in 1989
picture by Bruno Montpied, from his weblog

Champigny-sur-Marne, a municipality with around 78.000 inhabitants, is a suburb of Paris located south-east of the capital. In the 1970s/80s this community was home to an art environment, that now (2020) is in disrepair, with probably only a few remnants remaining.

The site was located at the Rue Diderot and its creator Marcel Lellouche (born in 1908), had designated it as Le Petit Musée (the small museum).

When in May 2018 Google Streetview drove past the Rue Diderot, this yielded below image of the entrance of the Petit Musée: a concrete wall with closed corrugated iron doors, located in the middle of urban high-rise buildings. 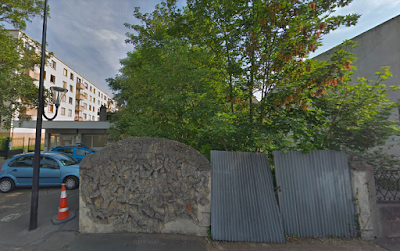 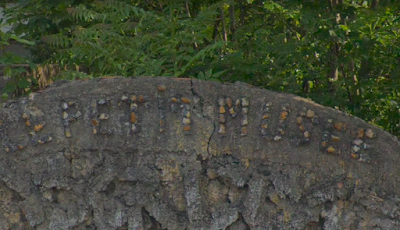 Behind the corrugated iron doors there is an elongated plot of land, divided into a courtyard at the front where meanwhile a large tree has sprouted and a rear part with a house where Lellouche lived.
Life and works
Lellouche in his working life was a retailer in fruit and vegetables.
He probably used the elongated plot of land as a space for the storage of his merchandise and as a place to park his van and other utensils that he needed to carry out his trade as a retailer and market merchant. 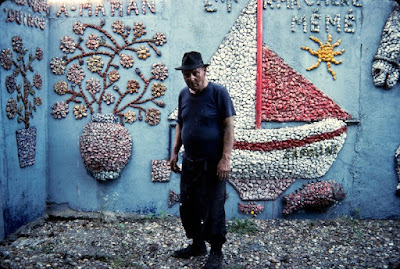 this picture and the next five courtesy of ©️Francis David;
from the website Habitants Paysagistes (Lille Art Museum)
Retired in 1970, when he was in his early sixties, Lellouche began transforming the site into an art environment.
This art environment can broadly be characterized by three elements:

- a variety of mosaics from small stones attached to the walls,
- freestanding, mostly mosaic structures and
- a number of texts added to the walls. 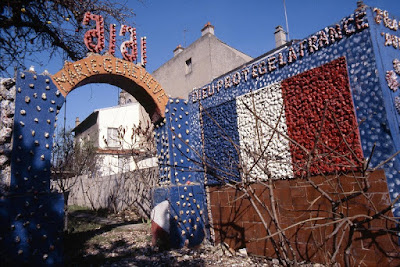 Another wall decoration can be seen on the right of above picture, where the blue, white and red of the French flag is depicted in combination with an inscription reading Dieu protège la France (God protects France).
The left part of the image shows an arch of honor constructed by Lellouche, presumably in honor of the lady whose name, Marie-Genevieve, is on the arch but about whom no further information is available.
On top of the arch there are four letters that together form the sign მ  I მ  I . It's not clear what this means. One could interpret this as DIDI, but then again it is not clear to whom this refers 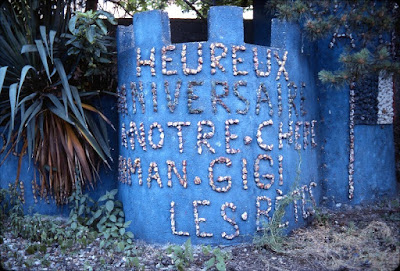 It is also tempting to interpret the combination of letters as GIGI, since elsewhere in this art environment an inscription to a a circular wall has this word. As shown in the picture above, the inscription says Heureux anniversaire à notre chére roman Gigi Les Bêtes (Happy birthday to our dear novel Gigi Les Bêtes).
Gigi is a famous book (1944) by French author Colette (1873-1954), a book that was not only adapted into a play, but also into two films and a musical. She also wrote two books with Bêtes in the title. 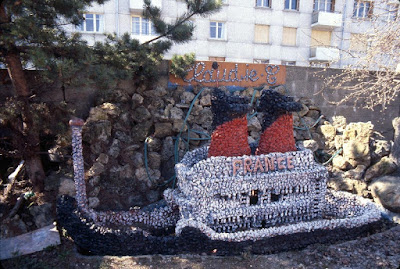 On the wall depicted in above picture, the name Claudie has been added. It's unclear to whom this refers.
However, there is more clarity about the ship that is also depicted. This must be a replica of the SS France, with its 316 meter the longest ship in the world at its time, built on a yard in Saint-Nazaire and put into service in February 1962.
This replica is one of the freestanding creations of this art environment. 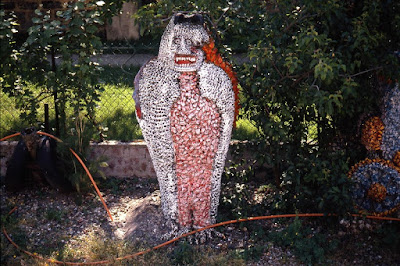 Another freestanding mosaic creation is the large owl, as in above picture.
Other freestanding items that decorated the site included a some three meter high replica of a windmill and a horse pulling a hearse. 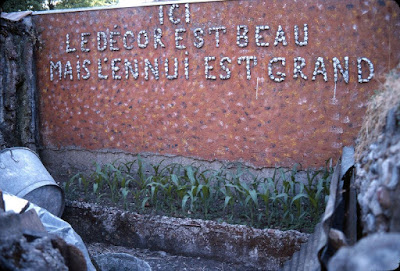 To conclude this overview of the creations in Lellouche's art environment, let's quote some of the texts he added to the walls.
There is a text that reads On est pas des pneus, mais il faut que l'on crève quand même (We are not tires, but we have to die anyway).
Another one,  partially visible in the picture with Lellouche standing in front of a sailing ship, says "Quinou" Je les offre á Maman et a ma chère mémé  ("Quinou" I offer these  to Mom and to my dear Grandma)
And finally, depicted in the picture above, there is a quote at the top of an otherwise empty piece of wall rising above a planter with green plants, which says: Ici le decor est beau, mais l'ennui est grand  (The decor here is beautiful, but the boredom is great).
It's a sigh that may say something about Lellouche's state of mind. He was a tormented person indeed, and when receiving visitors he could sometimes confuse them.
Lellouche continued to work on the decorations until around 1989, when he was in his early 80s.
It is not known when he died.
The site has been almost completely lost
Nowadays hardly anything has remained of this art environment. The free-standing structures have disappeared, just as the arch with the inscription Marie-Genevieve. There are just some remnants of the bas-reliefs and the inscriptions on the wall, although very damaged,
Documentation
* The site has a review in Bruno Montpied's extensive inventory of French art environments Le gazouillis des éléphants, Paris (Ed. du Sandre), 2017. -926 p
* Short review and a series of photos by Francis  David on the website Habitants-Paysagistes (Lille Art Museum)
Maurice Lellouche
Le petit musée
63 rue Diderot
Champigny-sur-Marne, dept Val-de-Marne, region Île-de-France, France
the site is in decay, no visits
Posted by henk van es at 9:41 PM