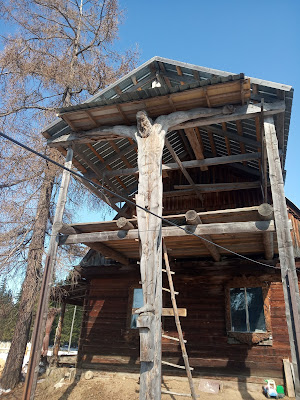 pictures courtesy of Marina Chebotaeva
The wooden sculpture pictured above is part of a variety of wooden sculptures exposed in the exterior area of a house that is located in the small Ural hamlet Sabik, a village with about 600 inhabitants, part of the municipality of Shalinsky in the Sverdlovsk region, Russia.

The wooden creations have been made by self-taught artist Mikhail Brylunov, who was born in Sabik in 1954.
After elementary school he started working as a machinist and woodworker at a local company. Married with Svetlana, the couple would get two children
. 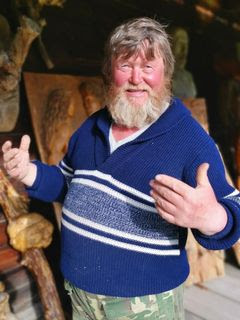 Brylunov in his workshop
In 1996. when he was in his early 40s, Brylunov started making wooden sculptures.
In his work he pays a lot of attention to mythological characters, who -since they are timeless- often are depicted without distinctive clothing.
He also depicted many non-mythical people naked, which in the beginning of his activities led to incomprehension or anger of villagers, but which as he received respect and recognition from both regional and national professional art critics, has turned into appreciation and pride. 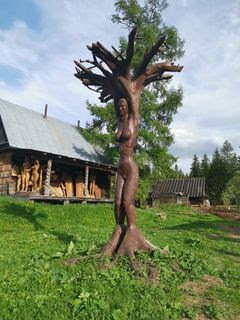 Striking about Brylunov's work is that several of his sculptures of people are life-size or larger, sometimes three meters high, a quality he manages to achieve by working long trunks of trees.
This also relates to tree stumps that are still rooted in the ground, as in the picture above. showing a young woman sculpted into a meters high tree of which the branches are still partly present. 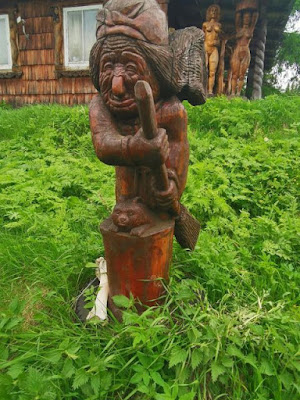 With regard to the mythological side of his work, Brylunov is in particular interested in the mythology of the indigenous peoples of the Urals.
He can tell enthusiastically about the mythical land of Diveria, a land of craftsmen, located under the Ural mountains, known only to the initiated and invisible to most people.
His art environment also is referred to as Diveria. 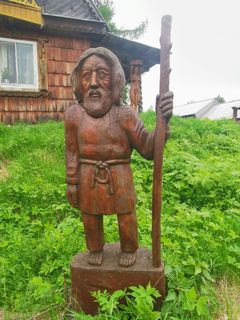 The eye-catcher of this site, pictured in the photo at the very top of this post, is a three meter long sculpture made from a 200 year old pine tree, easily visible from the road, that depicts the god Sabik, after whom Brylunov's home village is named.
Sab means master or judge, ka means soul of a person, mortality. So Sabik or Sabika is the master of the souls, as Brylunov has explained. 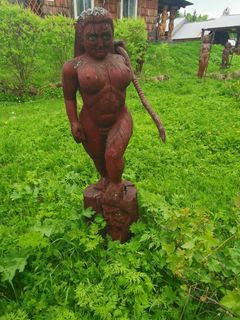 Brylunov also makes sculptures to order.
For example, in 2014 in a park in the village of Monetny near Yekaterinburg, a three-meter-high sculpture made by him was unveiled, depicting the Russian prince Alexander Nevsky, with helmet and armor, who in 1240 defeated the Swedes. 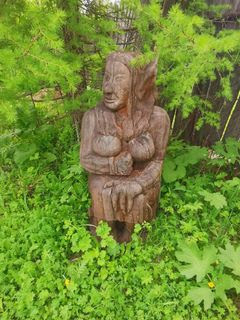 For a couple of years already Brylunov's son collaborates in the creation of sculptures,
Documentation
* An early article (September 2002) in newspaper Komsomolskaya Pravda
* A later article (January 2013) in newspaper Komsomolskaya Pravda
* Article (April 2019) by Marina Chebotaeva on website Nashural, with a series of pictures
Videos
* Video by the Chusova River Heritage Association (November 2019, YouTube, 9'09")

Mikhail Brylunov
Sculpture garden Diveria
Hamlet Sabik in the municipality of Salinsky, Sverdlovsk region, Russia
can be seen from the street, visitors welcome
Posted by henk van es at 2:35 PM