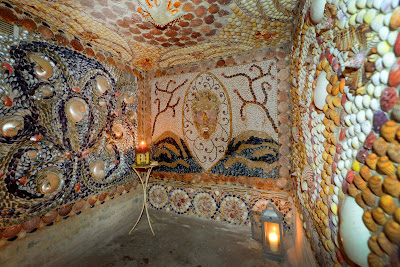 this picture (2014) courtesy of
regional newspaper Express & Star
The picture above shows part of a shell decorated garden grotto that is located in a private garden in the community of Compton, a suburb of Wolverhampton in the West Midlands in England.
Life and works
This art environment was created by Anne Bailey, born in the late 1940s, who was a social worker and her husband Brian Bailey, born in the early 1950s, who was an accountant. Both got retired around 2009.
In 1990 they had moved into the house in Compton. 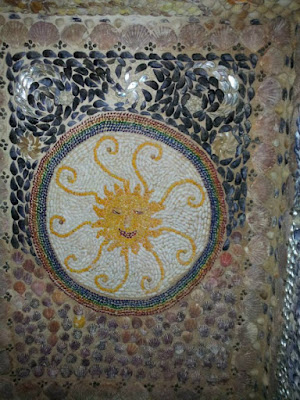 the sun presides over fire and water
this picture and the next ones from the
Facebookpage of the Baileys "Garden of surprises"
At the time they settled in this house, the garden at its backside mainly was a grassy area with some conifers.
The Baileys decided to transform the area into a real garden in the English landscaping tradition. It would become a project on which they for the coming decades would work with diligence and passion. Currently (2020) they have been engaged with their garden for about 28 years
Around 2010 the planting of the garden had reached such maturity that the Baileys could join the National Garden Scheme, where private gardens are opened up for the public to visit. They gave the garden familiarity with the name Garden of surprises 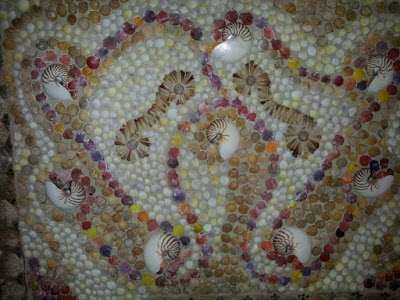 light and day
Creating a shell decorated grotto
In 2008 Anne and Brian Bailey started creating the shell grotto. When in 2010 the garden for the first time opened to the public, two walls of the grotto were ready. The project would be completed three years later. So all in all, applying the shell decorations took some five years.
The structure that has been transformed into a grotto was an old bunker. Added to the garden in 1939 it was meant to serve as a shelter during the Second World War. The entrance is currently hidden behind the Gothic summer house that was built by the Baileys around 2015. 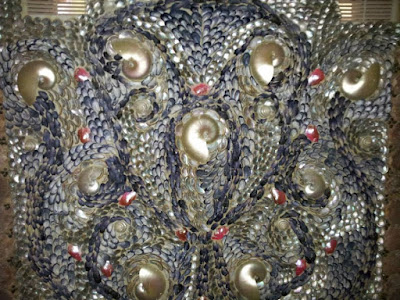 darkness and night
The shells incorporated in the decorations of the Grotto were collected during trips to the seaside. Friends and acquaintances would participate in collecting shells.
The decorations also include a number of purchased shells, especially the rarer ones, which cannot be found on England's beaches.
Designing the arrangement of the shells was mainly Anne's work. Inspiration was gained from visits to shell caves elsewhere. The underlying idea of the entire design is the concept of earth, water, fire and air as developed in medieval times.
More about the decorations
Entering the cave the visitor faces the Green Man who is depicted amidst sprouting flowers and plants (earth) in a larger scene that depicts the waves of the sea (water). 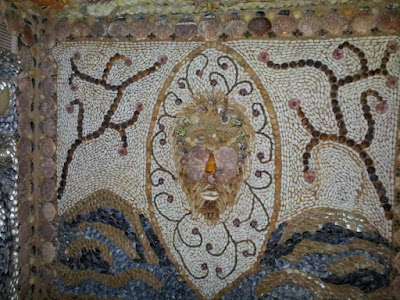 the Green Man on the panel
that represents earth and water
The Green Man is a centuries-old spirit of nature, which symbolizes human dependence on and unity with nature, this in relation with creative power and rebirth, especially when it comes to the revival of nature in spring. That is why the Green Man is often depicted with a face surrounded by leaves or even with foliage growing from its head.
In European countries, and certainly in England, a mostly wooden or stone sculpture of a green man adorns a number of old churches and other buildings.
The small wall left of the entrance, depicted in the second picture from above, has the sun (fire) with a rainbow, moons and stars (air)
Seen from the entrance, the wall on the left has the theme of darkness and night, which is represented by a multitude of dark-blue tinted shells interspersed with six large, silvery-colored shells that as it were bring light into the darkness.
The wall on the right side depicts the theme of light and day by means of winding rows of colourful, mainly red and yellow-colored shells on a light background. 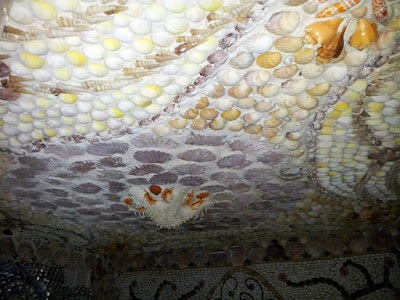 the ceiling
The ceiling has red-, yellow- and white colored shells, including a series composed of Coquilles Saint Jacques, added to the ceiling in a circular arrangement. 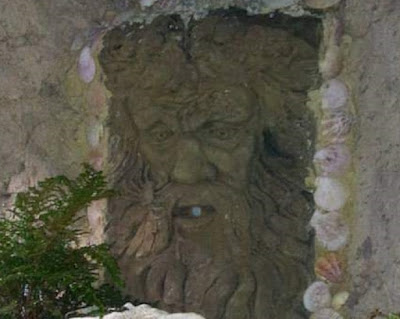 Just before entering the grotto as such, there is a small corridor with a wall with a high-relief sculpture of a man with a sumptuous hairdo, as in above picture, a depiction of the old man of the sea who guards the grotto.
Winter 2016/2017 the shell grotto suffered from the cold and a lot of shells crashed unto the floor, Fortunately, the sketches with the way of applying the shells had been preserved, which allowed that the grotto could be restored into its original state 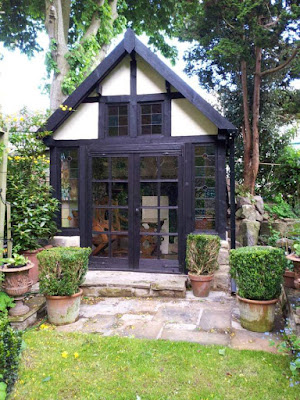 The summer house
The building pictured above was constructed by Brian Bailey in the winter of 2012/2013. It's located just in front of the shelter that includes the decorated grotto and it serves as a summer house, a quite place to retreat and enjoy the view on the garden.
The structure was mede of black and white wood, it has stained glass windows, the wall opposite the entrance is decorated with a frescoe and the interior has elegant wooden furniture. The rear wall has a window that gives a view of the Grotto.
Rewards
This summer house, also referred to as the Gothic retreat, was featured on British TV in a program entitled Amazing Spaces. It got a reward as Shed of the Year 2014 .
In 2015, Anne and Brian Bailey won the first prize in the national garden competition organized by the Daily Mail newspaper
Documentation
* The Garden of surprises on Facebook
* Article (May 2014) in regional journal Express & Star (includes the photo at the very top of this post)
* Article (June 2018) in newspaper Daily Mail
Video
Video (1'03") of the Garden of Surprise as available on the Facebook page of the Garden of surprises
Anne and Brian Bailey
Shell decorated garden grotto
(in the Garden of Surprises)
19 Waterdale, Compton Wolverhampton WV3 9DY
region West-Midlands, England, United Kingdom
can be visited on open days
Posted by henk van es at 3:37 PM