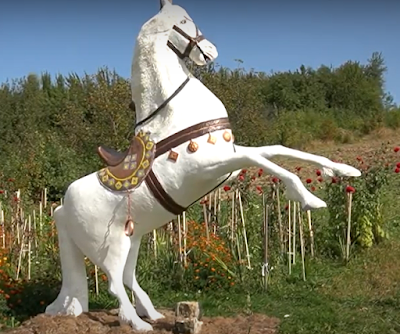 all images showing parts of the art environment
are screen prints of the videos (see documentation)
The sculpture of a rearing horse pictured above is located in an art environment in the small village of Runguri with about 2500 inhabitants (2010), located in the southwest of Ukraine near the city of Kolomyia.
Runguri, together with other villages in the area, is part of a united territorial community with Pechenizhyn as its main town. 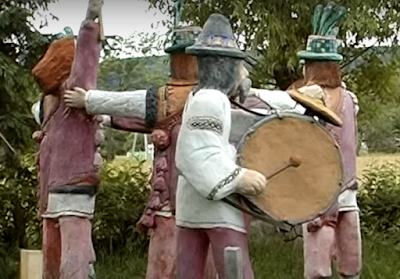 This art environment was created by Oleksiy Bondarenko, who was born in Pechenizhyn, probably in the late 1930s or early 1940s.

Bondarenko worked for 35 years as a decorator at a large furniture factory in Pechenizhyn. In 1995 the factory was privatized and it went bankrupt in 2013. 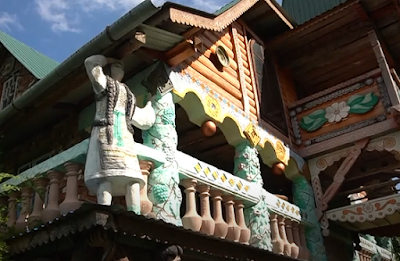 Around 1995 Bondarenko left the factory and everything indicates that he  was retired.

He moved from Pechenizhyn to Runguri, where he settled in a house with a ground floor and an upper space. And then he apparently had enough free time to convert the outdoor area of the house, which was initially swampy, into a garden.

But the best indication is, that at that time as a self-taught artist he started to make sculptures, an activity about which there are no reports that he was making such creations before.

The picture above and the one below show how Bondarenko decorated the exterior of his new house with sculptures and other decorative items. 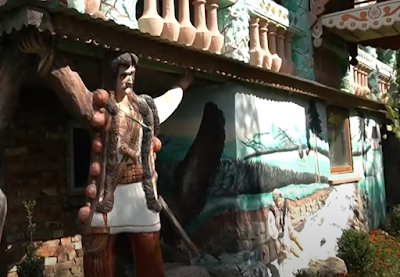 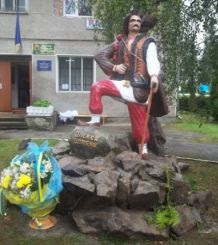 picture from touristic website I go to world
The photo above shows an example of a sculpture in an institution's collection. It is a statue in front of the Alex Dovbusha Museum in Pechenizhyn, depicting Dovbusha, leader of an independence movement in the area, active in the late 1730s.
When creating the sculptures, Bondarenko first makes an infrastructure of iron wire and mesh, which he covers with a mixture of cement, sand, liquid glass, glue and the moisture-resistant agent ceresit. In addition to this high level of Bondarenko's technique, he showed himself to be a fast worker. For example, to make a life-sized sculpture of a horse he just needs some four days
A garden with a variety of life-size sculptures
The creations in Bondarenko's garden include sculptures of all kinds of animals,  (historical) persons as well as ensembles and installations. 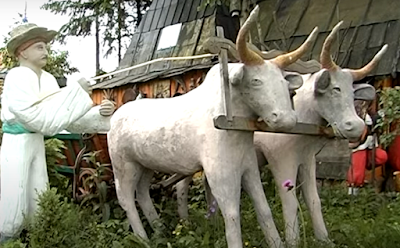 Bondarenko's sculptures have a strikingly realistic appearance.
This can be seen in the life-size depictions of the animals, such as the horses in various poses and the oxen pulling a cart, and the many creations he made from other animals, such as a group of white swans on a rotating device, a lion, a peacock  a deer, a hare, and so on. 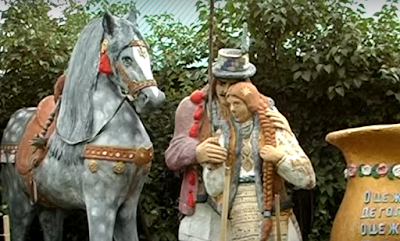 And the realistic appearance is also present in the portrayals of persons.

In this regard Bondarenko has said: "You must also know the anatomy of animals and people, so that the figures do not lose their proportions. We must also not forget the details of costumes and facial expressions. When I sculpt historical characters, I carefully study their portraits"

In a number of his sculptures Bondarenko portrayed persons from various ethnic groups living in Ukraine, such as the Cossacks (he made a sculpture that has been placed on the island of Khortytsya in the Djnepr river, an island which is said to be the cradle of the Zaporozhian Cossacks) and also the Hutsuls, an ethnic group of Ukrainian pastoral highlanders inhabiting the Hutsul region in the Carpathian Mountains, distinguished by their colorful, richly ornamented folk dress 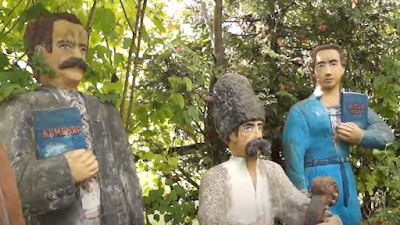 But in his sculptures of persons Bodarenko also depicted well known Ukrainian politicians, musicians businessmen and other persons, the various characters often being arranged into ensembles.
There are also ensembles that are set up in a specifically secluded part of the site, such as a the scene below with sculptures of a woman (probably the virgin Mary), a young girl  and a shepherd (?) arranged in a chapel-like structure with an angel in the foreground, a scene probably representing the annunciation of the Holy Virgin. 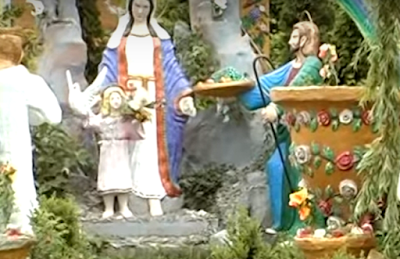 Finally, this art environment also includes some hand-built devices that testify to Bondarenko's technical skills, such as windmills, merry-go-rounds and special swings.
The decorated garden attracts many visitors, adults as well as children, but also bridal couples who come to take photo sessions amidst the sculptures and the play equipment.
Documentation
* Wikipedia
* Article (May 2017) on the website of Dzerkalo Media, with a series of pictures
* Article May2017) on website Firtka
* Short article (October 2, 2020) on website Kurs, with the video of October 1, 2020, shared below
Videos
* Video (3'10", October 1, 2020, YouTube, ) by regional public TV NTK-Channel