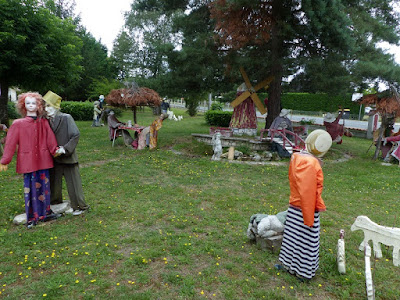 all pictures (around 2017)
courtesy of Sophie Lepetit, from her weblog
Located in the south-west of France, some 45 km east of Bordeaux, the community of Les Peintures is home to an art environment in the capacity of a garden decorated with  life-size depictions of people in all kinds of situations in daily life. 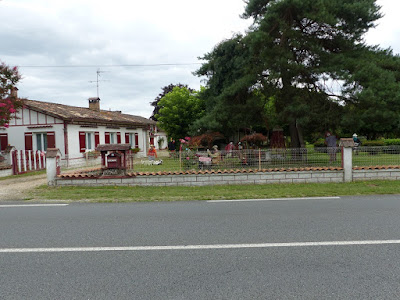 Life and works
This garden, situated along the departmental road D674 that crosses Les Peintures, was begun in the early 1990s by Robert Bretin, a retired mason, about whom the internet has no further biographic information. 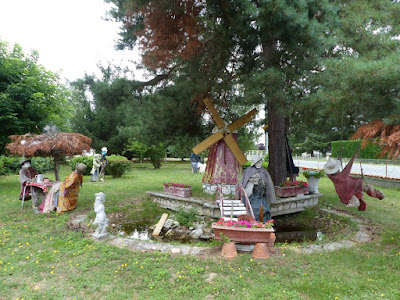 Bretin became inspired to make such creations because of a tradition that originated in the community of Campan, in the French Pyrenees, where life-size dolls -in Occitan called mounaques- were placed along the roads in the summer, a tradition that has now spread to many villages in the area of the Hautes-Pyrénées.
For example, in Boussan, a village of 200 inhabitants, three times in summer there is a exuberant display of groups of mounaques made by numerous residents. representing events with a daily or festive character, such as a baker at work or a family celebrating a wedding.
The bodies of these life size creations are traditionally made of straw and dressed with discarded garments. 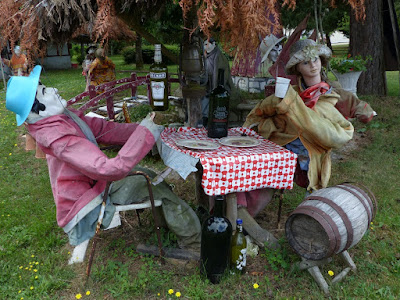 Bretin also made his creations from straw, dressing them with second hand clothes he regularly bought or was offered by acquaintances.
The accessories of the straw people may depend on the time of the year, taking into account days such as Easter, Halloween, the French National Day (Storming the Bastille) on July 14, Armistice Day (End of WWI) on November 11 and Christmas.
The faces of the creations seem to consist partly of commercial masks, partly they appear to come from shop-window dolls from earlier times, especially those with hairdos. The available documentation doesn't have information about this.

Bretin has arranged the creations in his garden in a cozy way. People can be seen sitting around a table enjoying a meal, a child is swinging, someone is catching a fish, people are talking or walking together.... 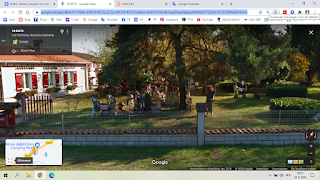