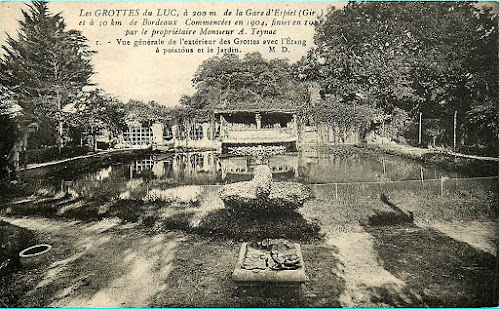 exterior of the caves with pond and garden
postcards licensed under Wikimedia Commons,
the photos on all postcards have been made by Marcel Delboy (1882-1941)
Espiet is a small community with currently some 800 inhabitants, located in the south-west of France, about 30 km east of Bordeaux.
Fallen into oblivion over the years, in the first decades of the 20th century the community featured a self-made complex of decorated caves called Les grottes du Luc (The Caves of Luc).
Life and work
The complex of caves was built from cement between 1904 and 1928 by Alcide Teynac. The internet has no information about the dates of birth or death of this self-taught artist. But it has been reported that he lived in Espiet, was a beekeeper by profession, loved to compose songs in his spare time and wrote a book, self-published in 1927, entitled Isabeau de Curton.

And he also worked for around thirty years on the construction of a complex of decorated caves.
With regard to this creation the main source of information  is a series of postcards dating from the early years of the 20th century. So here we go..... 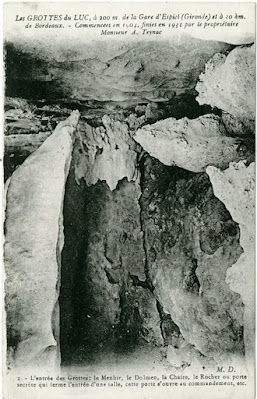 The first postcard, at the top of this post, gives a general impression of the place where the caves were located: a pond flanked by a series of structures, which may have housed the caves, all situated 200 meters from the railway station of Espiet ¹.
In the photo above there is not much to distinguish apart from the rocky structures, but the caption on the map suggests that this is the entrance to the cave system. It is mentioned that there is a secret door that connects the entrance to another room, a door that will open on command
And the caption also refers to a menhir, a dolmen, a chair (or a pulpit) and a rock, but it is not clear whether these items were part of the entrance area or were situated elsewhere in the caves. 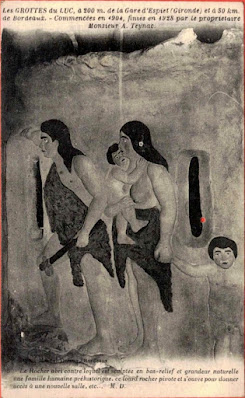 The photo above shows that Alcide Teynac also added sculptures to the interior of the caves. This is a natural-sized representation of a prehistoric family carved in bas-relief. This piece of rock can also rotate and then provides access to the next space. 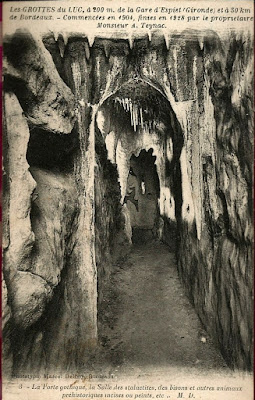 The caption on above postcard says that here the Gothic door is depicted. It probably gives entrance to the room of stalactites, bisons and other animals, incised or painted. 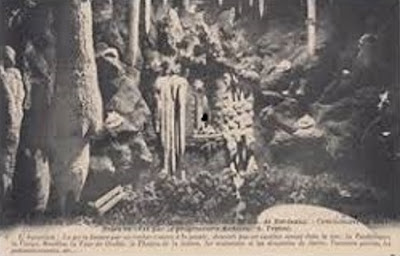 On the postcard above, the explanatory text is difficult to read, but it says that this is a representation of:

"Aquarium, the door closed by a rock opens to the floor, descent by a staircase carved in the rock, the Pendelogue, the Virgin, Boudha, the Devil's Tower, the Theater of Nature, the stalactites and the stone draperies, the secret closet" ......

Well then, that is a large series of all kinds of creations, which, moreover, are practically not distinguishable in the postcard.
This enumeration of creations, together with the creations mentioned in the other postcards, indicates that Teynac with his Grottes du Luc has delivered a piece of work that deserves a place in the field of art environments.
For now, however, it can only be concluded that this is far from the case, because the internet neither  has referrals to informative articles about the Caves, nor information that could be used to compile a coherent description of the site.
The data about this creation are so scarce that it has not become known what became of the >Grottes after the death of their creator.
Documentation
* One of the few scholarly remarks on the internet about Teynac is in:
Veronique Moulinié, D’une architecture à l’autre : Les habitants paysagistes et le Musée d’Art Moderne de Lille-Métropole, à Villeneuve d’Ascq (2010) (Programme interdisciplinaire de recherche Art, architecture, paysage Sessions 2004 et 2005) Alcide Teynac is referred to as follows:

note
¹ The railway line that was served by the station, in 1954 has been disbanded and the building now houses a restaurant.
Alcide Teynac
Grottes de Luc
Espiet, dept Gironde, region Nouvelle-Aquitaine, France
there is no information available about
the fate of the site after its author died
Posted by henk van es at 8:25 PM