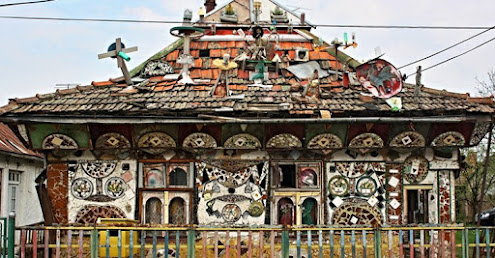 The picture above shows the decorated facade of a house in the small village of Pribenik, located in the south-east of Slovakia, near the borders of this country with both Hungary and Ukraine. In the past the village has also been part of alternately Hungary or Ukraine and currently many inhabitants still have a Hungarian origin.

The decorations of the house, meanwhile removed, were added by József Balogh, who was born on January 3, 1920 in a peasant family in Vojka, some 12 km north-west of Pribenik,

In October 1941, at age 21, he was enlisted to the Hungarian army. Deployed in the war fought by Germany and allies against Russia, he ended up in a Russian prisoner of war camp.

After the war Balogh settled in Pribenik, where he became the local shoemaker. He married and his wife Margit and he had four children, two of whom would die at a young age.

Balogh was a sturdy man, with long hair, who made his own clothes and, if it suited him, was dressed in shorts, a way of doing most villagers did not understand much about. 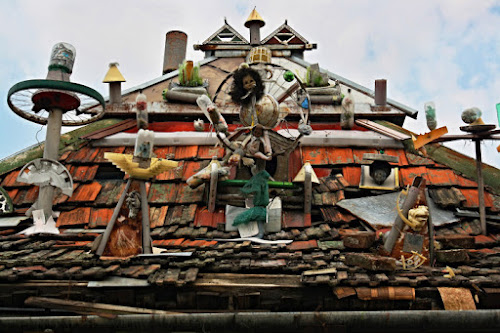 the roof in detail

Around 1978 the villagers would be even more surprised. Balogh was in his late fifties, the two children had left home and he started to decorate the house,  a project he would be engaged with for the next decades.

Roaming the region by bicycle, he collected all kinds of discarded items, such as bicycle wheels, dolls, plastic bottles, windmills and other finds, which he attached to the sloping front part of the roof of the house, as can be seen in the picture above 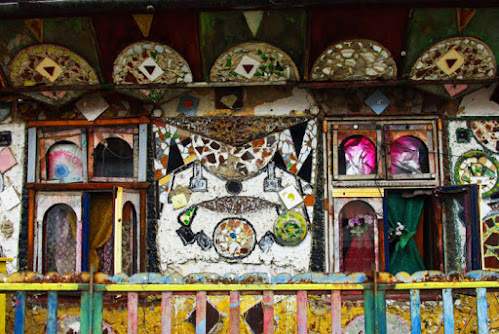 detail of the facade
As the picture above shows,  the wall at the front of the house, under the roof, was partly decorated with small semicircular mosaics directly under the eaves, and furthermore with larger square mosaics between the windows. which in turn were provided with colorful curtains.

The square surfaces on the wall at the front of the house seem to have included mosaics with a mainly decorative look, geometrically ordered abstract configurations. 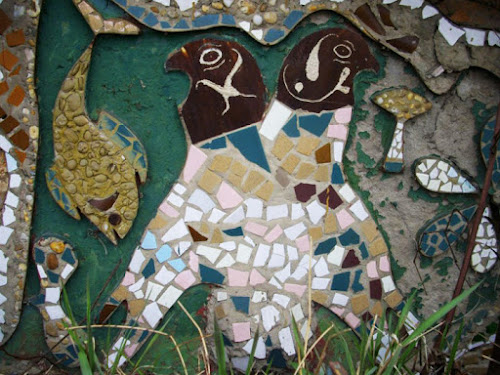 But Balogh also made mosaics with a more narrative character and more or less recognizable characters, such as in the image above, in which a fish can be seen as well as an animal that could be a two-headed bird. 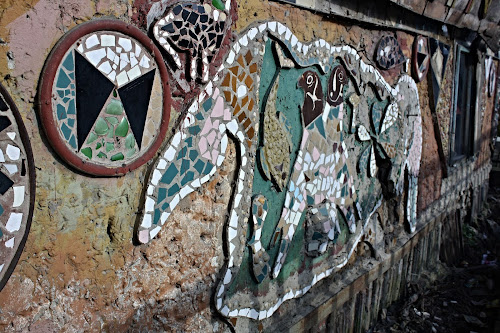 The picture above shows that the two-headed bird and the fish are depicted in the context of a larger mosaic that might represent an elephant.

Balogh has remained active in updating his creation until old age. In 2008, when he was at the age of 88, the regional newspaper Novy Cas (see documentation) visited Balogh and reported that in the previous year he had once more adjusted the facade and the fence of his house.

The newspaper also reported that Balogh's health was deteriorating.
He died in 2009

The house with the decorations has been demolished

After Balogh's death his property, that included two buildings, was sold and the new owner demolished the house with the decorations.

This probably would have remained so, if not in the course of 2019 Gergó Fülöp, who as a young boy lived in Pribenik and in the 1990s on his way to school passed Balogh's decorated house, decided to take action to keep the memory of Balogh's creation alive and to give the site a place in the field of art environments.

Fülöp, who had become an artist running an exhibition space, organized an exhibition (January-March 2020) in his art gallery in Budapest and wrote an article that in April 2020 was published on the Polish website PrzeKrój (see documentation).

Exposition in Budapest in 2020 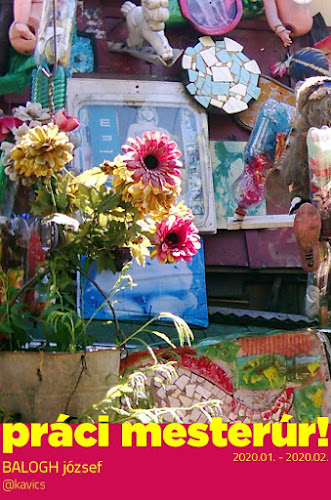 As said, from January until March 2020 the art-gallery Kavics (Pebble, in English) in Budapest, managed by Georgó Fülöp, had an exhibition about József Balogh entitled Práci Mesterúr (Work of a master!).

Thinking back to what he had experienced in his early years passing Balogh's decorated house, Gergó Fülöp in the course of 2019 realized that József Balogh represented a breath of fresh air.

"This man had very few material riches and at times went through hardships, yet he did not pursue wealth or fame through his works. József was able to see value in things that weren’t valued by others; he was able to find fulfillment, precisely because he focused on those small pleasures that brought him joy. At a time when it might feel like the world is collapsing, perhaps we can all learn something from József and seek solace in simplicity'  (quote from Fülöp's article The Humble Poet, see documentation)

Indeed, that is why it is so satisfying to add Balogh's creation to the inventory of art environments this weblog is

Documentation
* Article (April 2008) in newspaper Nový Cas (with a series of pictures)
* Article by Georgó Fülöp, "The Humble Poet. A Local Cobbler's Folk Art", on website PrzeKrój (April 28, 2020)
* Introduction to and a series of photos of Balogh's work, a document on Georgó Fülöp's website, edited in the context of the exposition early 2020
* The website of the municipality of Pribenik has a photo gallery with pictures of the site
video