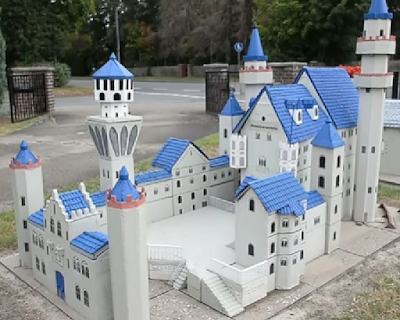 
The picture above shows a replica of the famous Neuschwanstein Castle in Bavaria, Germany, as it can be seen in the front yard of a house in the small village of Abbensen, part of the municipality of Wedermark, located north of the German city of Hannover.


This replica and eleven others, all located in the front yard, were created by Albert Diekmann.

Diekmann was born in the early 1940s and worked in an office job with the German Railways, a job he retired from in the late 1990s.

The beginning of his activity as creator of an art environment was in the year 1998, when his wife received a scale model of a castle as a present for the garden. The model was made of a kind of cardboard and Diekmann thought that if small stones were added, the model would be more realistic and better protected against influences of the weather. 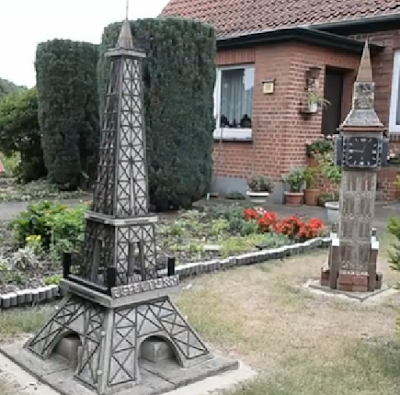 Diekmann got to work on this and was so enthusiastic about this type of activity that he then started working on his first replica.

In 1999 this piece of work, a grandfather clock, was completed and -somewhat hidden- it is still standing in the front garden. For the next twenty years or so, Diekmann would focus entirely on making relatively large-scale replicas of famous buildings in Germany and elsewhere in the world.

The front yard currently (2020) includes twenty creations, including Neuschwanstein Castle in Bavaria, the Eiffel Tower in Paris, the Big Ben in London and the Washington Capitol, all depicted in this post. There are also replicas of the Johannis Chapel, which is near Diekmann's house, and of the Water Tower in Lehrte, 17 km east of Hannover.

A few years ago, due to his age, Diekmann decided not to make any new creations, but to focus on the maintenance of the site. In August 2020 the site got a lot of publicity in regional newspapers and TV.

A labor-intensive and time-consuming activity

For the various parts of a creation Diekmann made wooden molds, which were provided with iron wire mats for strength. To these molds a layer of a few centimeters of poured concrete was added, which then had to harden for a few weeks before the different elements could be merged.

To give an example, here is how the construction of the replica of Neuschwanstein went.

As there are no construction drawings of this structure available, Diekmann used a 3D jigsaw puzzle as a guide. Establishing that the highest part of the building should be around 1.80 meter high, he could then determine the different dimensions of the composing parts of the structure, such as the towers and the various individual buildings that make up the complex.

All in all, the construction of this replica took him almost a year, 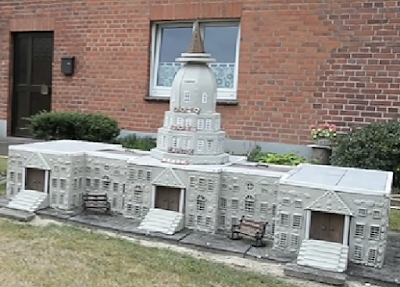 the Capitol in Washington


Diekmann has apparently tried to render the various buildings as realistic as possible. For example, the Big Ben is equipped with the necessary dials that also indicate the correct time. The Eiffel Tower also has an authentic look, although the replica is not made from iron, but from concrete slabs.

The various creations are each individually constructed to scale, the scale of each structure probably being determined by what for Diekmann was a workable height. This might explain why the replicas of the Eiffel Tower and of the Big Ben have almost the same height, when in reality the Eiffel Tower is three times as high.

Alte Zollstrasse
Abbensen, municipality of Wedemark, Lower Saxony, Germany
the site can be seen from the street
Posted by henk van es at 1:08 PM