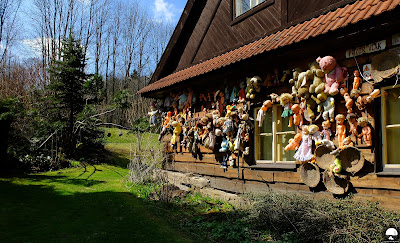 In the field of art environments in Europe, there are some sites with a decoration mainly composed of dolls, such as those of Francis Barale (France), Daina Kučere (Latvia) and Margarita Travkina (Russia). This small group of creations can be complemented by a site in the Czech Republic curated by Lubomira Votava.

Votava was born in the early 1960s in Havlíčkův Brod, a town in the Vysočina region of the Czech Republic.

Initially he worked as a tractor driver. In 1989 he attended a rally of the Republican Party, often referred to as extreme right and represented in the Czech parliament from 1992-1998. Votava joined that party, working his way up to become an advisor and bodyguard to the party's leader.

In that capacity, Votava gained notoriety for some incidents, like he punched an opponent with his fists. Later he was convicted for being violent against a journalist, after which he left the world of politics and in 1998 retired to the small village of Rváčov, also located in the Vysočina region. 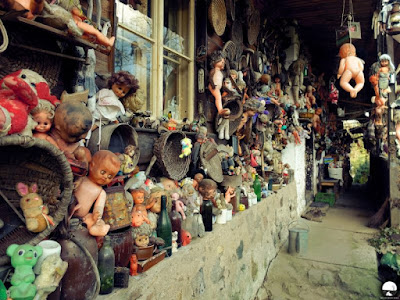 Votava settled in Rváčov in a simple house, built around 1870, initially inhabited by his grandparents and thereafter used by his parents as a summer home.

Rváčov was now in his late thirties and living on his own. Away from the urban hustle and bustle of Prague, Votava now focused on the quiet rural life in the village.

Especially pleased with the garden located between the cottage and the main road that crosses the village, he spent a lot of time maintaining it. He built a pond with his own hands and from ten kilometers away, in a wheelbarrow he carried  a large amount of stones into the garden, some of these stones being three feet high

As a result, in 2016 the garden was reviewed in the Czechian magazine Chatar Chalupář, a practice-oriented monthly magazine about housing and lifestyle. 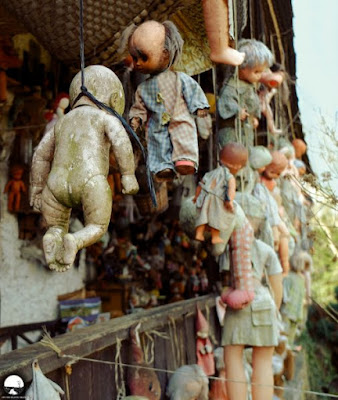 But what would make him known, both in the village and beyond, was not the composition of garden, but the special way in which he provided house and garden with decorations.

From his early years a lover of old toys and discarded dolls, he started to decorate interior and exterior especially with dolls, which he obtained from people around who wanted to get rid of them, which he found in trash cans or which sometimes were just left behind by people, deposited at the garden's entrance.

About a thousand dolls cover the outer wall of the house and are attached to the branches of trees in the garden.

His way of decorating house and garden, which is visible from the main road that runs through the village, has led to varied reactions among the residents, both appreciation and disgust or fear.

Votava has said he doesn't exhibit the dolls to scare passers-by. He wants to prevent them from ending up in the garbage and being destroyed. He has explained that for him dolls are a medium from which energy passes. Looking at some dolls he sees in their eyes the child that played with them many years ago.

This train of thought is reflected in most arrangements of the dolls, as demonstrated in the pictures above. 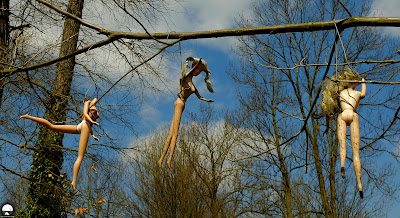 But an arrangement like the one in the photo above, in which dolls -partly without a head- are suspended from a rope around their necks, arouses less sweet associations.

So in presenting both the lovely and the harshness, this art environment shows an ambiguity. It is not clear if this ambiguity is intended or unintentional, but in any case it can confuse a potential visitor.

Documentation
* Article (November 2014) on the website of TN Nova, with a short video and a serie of pictures
* Series of photos with explanation (December 2015) on website Off the Beaten Track, edited by Justyna Orlovska
Videos
* Detailed impression of the site in wintertime (November 2015, YouTube, 14'35")

* Video by Vladimír Havlíček (July 2019, YouTube, 3'57") with Votava talking about the collection

Lubomir Votava
House and garden decorated with dolls
Rváčov, Vysočina region, Czech Republic
can be seen from the road