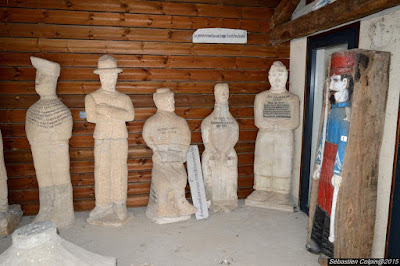 all pictures (2015) courtesy of Sébastien Colpin
from his website

In Saint-Salvadour, a commune of a few hundred inhabitants in the Corrèze area in central France, there is a small museum that exhibits granite sculptures created by Antoine Paucard, a retired mason who was born in that village and lived there most of his life.

The son of one of the last millers in the community, Paucard was born on December 5, 1886. After his primary education, which he completed in 1897, he did not follow any further courses, but went to work.

Initially he probably had jobs in or around the village, but in August 1906 he joined the French army, becoming part of a unit based in Africa, the Regiment 3 of the African Hunters (Chasseurs d'Afrique). Paucard left the army in 1909 after an accident in which he lost an eye due to a horse kick. He stayed in Paris for some time and then returned to his native village to start working as a farmer.

In 1915 Paucard married Françoise Cérézat. The couple would have a son and a daughter.

After World War I he became a mason, a job that in this period was important because of the post-war reconstruction. Sometimes alternated with farming, Paucard would continue working as a mason until his retirement in the late 1940s/early 1950s.

As a mason Paucard in particular focused upon building houses, and it has been reported that his predilection to express in a notebook what was on his mind, entailed that each completed house was celebrated with a song included in one of the 120 notebooks he filled between 1930 and 1975, scriptures that became part of his legacy. 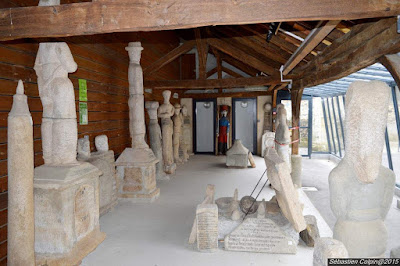 Paucard has also manifested himself politically. In 1930 he joined the Communist Party. In 1933 he made a trip to the USSR, from where he returned disappointed. The book in which he explained this, Un mois en Russie, par un paysan de la Corrèze (A month in Russia, by a peasant from Corrèze), 1934, subsequently led to his break with the party.

During the Second World War, Paucard joined the French resistance and after the war he was mayor of Saint-Salvadour for a year.

In the early 1950s, now retired, he became somewhat disillusioned with politics, and he began to devote himself to making sculptures. 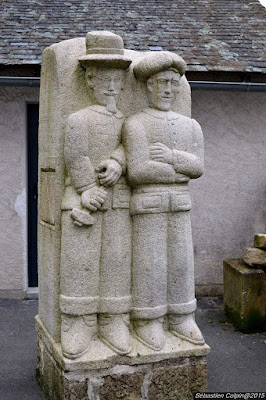 Creating a collection of sculptures

All together Paucard has created about thirty granite sculptures. As the pictures in this post show, these sculptures mostly portray people.

To indicate what kind of persons it concerns: the sculptures include famous French personalities, such as Charlemagne (= Charles the Great), Napoléon, Richelieu, the generals Margueritte and Nivelle, known from World War I.  There is a sculpture of Saint Salvadour who also names the village.

And then there are portrayals of people from his family circle such as his father and his grandmother and sculptures that depict colleagues from his time as a soldier with the Chasseurs d'Afrique.

To conclude this small overview, it can be noted that Paucard has also portrayed himself. The image directly above shows two people, of whom the one on the right must be Paucard, while the one on the left is a friend named Roger Cronnier. 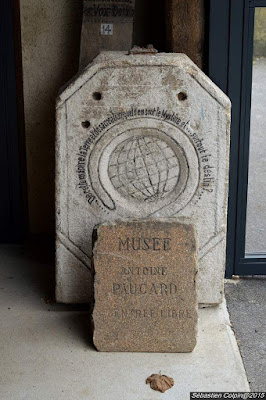 A special aspect of Paucard's artwork is that many sculptures are provided with inscriptions that explain the scene, sometimes in poetic form, like he also made creations with only text, as aphorisms or philosophical expressions.

In English: Of this misery the Earth and its creation, what are the Mystery and ..... especially the Destiny? Not nothingness, no doubt, because it is just Non-sense

Paucard did not make his sculptures to sell, he kept them together and housed his creations in a separate shelter near his home, an accommodation he constructed himself and which eventually became a small-scale museum. 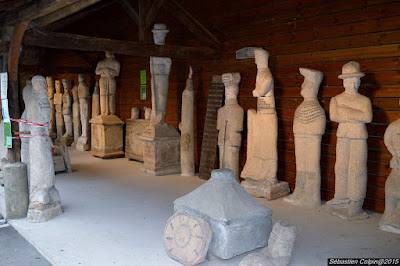 Just as Paucard's notebooks include all kinds of personal thoughts and poems, so his sculptures can be seen as just as many representations of persons who in any way were of significance to him.

And just as the notes in these notebooks joint together acquire a specific meaning, so the collection of sculptures in their mutual relationship gets its own meaning, as is the case in many art environments. 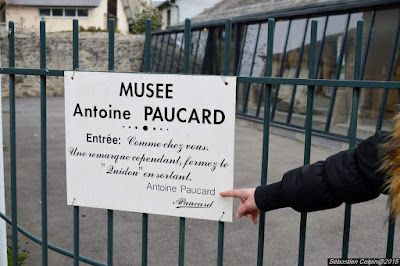 After the necessary preparations (funds had to be collected to renovate the former courtyard of the school of Saint-Salvadour near the town hall and the collection had to be transferred to their new premises), the Museum was officially opened in November 2010.

The museum is open all year round and can be visited free of charge. 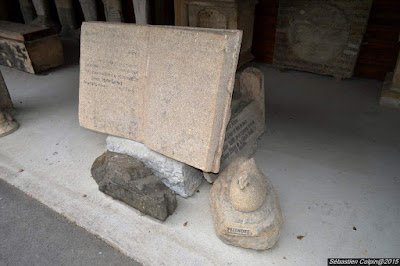 Email ThisBlogThis!Share to TwitterShare to FacebookShare to Pinterest
Labels: display of sculptures made from stone, museum