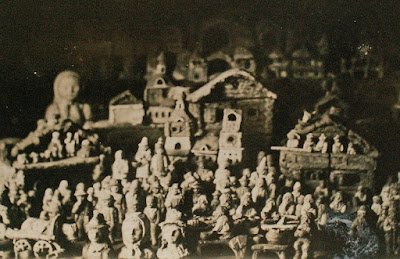 part of an arrangement of some 800 items and figurines from clay,
forming together the imaginary city of "Cordon"
this photo and the next one  (from Livejournal) probably taken by Chestnyakov

Efim Vasilyevich Chestnyakov (1874-1961) almost all his life lived in the tiny village of Shablovo in the Kostroma region of Russia, except for some years he was a teacher in other communities and a few years he had an art education in St Petersburg,

He also made large scale miniature scenes with figurines and structures from clay, as shown in the photo above and the one below. 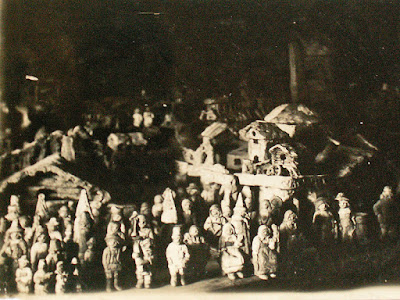 another part of the clay figurines,

Born on December 31, 1874 in a farmers family living in Shablovo, Chestnyakov at a young age already showed he had a talent for making drawings.

After his primary education, he followed from 1889-1894 a teacher training, to become a teacher (1894-1899) first in a village near the town of Kostroma, then in Kostroma itself and later in the village of Uglets near the town of Kineshma in the Kineshemsky district (Ivanovo oblast).

When Chestnyakov was a teacher in the Kineshemsky district (1896-1899),  he participated in the circle of local intelligentsia, he read books on philosophy and culture, drew a lot and painted watercolors. He also developed a passion for theater when in December 1897 in Kineshma a theater was opened.

At the end of the 20th century in rural Russia the Petruschka theater was in particular popular, a performance with marionettes and hand puppets, the main character being kind of a jester dressed in a red costume and sometimes with a long nose.

Later in his life the phenomenon of theater would be an important aspect of Chestnyakov's artistic activities. 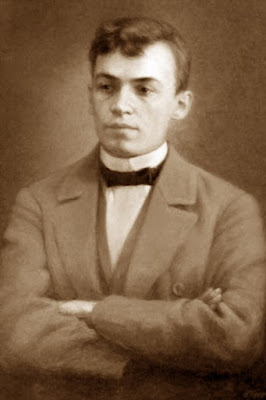 During Chestnyakov's stay in the Kineshemsky district his talent for drawing was noted and friends raised funds which enabled him to move to St Petersburg, where from 1900 he would take lessons. both in the workshop of a well-known professional painter and at an art academy.

In 1905, because of rebellions in Russia, the Academy closed and Chestnyakov -his education not yet completed- returned to his native village, where he settled in a small house, as pictured below. 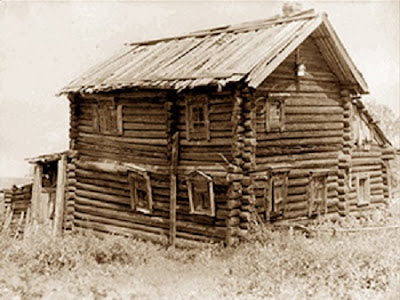 He was in his early 30s and his decision to return to his native village meant that prospects for a career as a professional painter would become less obvious.

It may be that he meanwhile had become aware that his artistic interest was much broader than just making paintings, and that this capacity, combined with his inner drive to contribute to a better future for people around, and especially children, could be better realized in a rural than in an urban setting.

Whatever this may be, the first quarter of the 20th century, was the period in Chestnyakov's life with the greatest artistic achievements, both in making paintings and in his other activities like doing theater performances, making clay figurines or writing books with fairy tales.

Form a point of view of art environments, one of his various activities is very interesting, namely the making of a large collection of figurines of clay, which he started some years after his return to Shablovo.


Some 800 of these figurines, together with other small items, were combined into an ensemble that depicted a city named Cordon. It is a city with houses, palaces and streets, inhabited by children and adults. 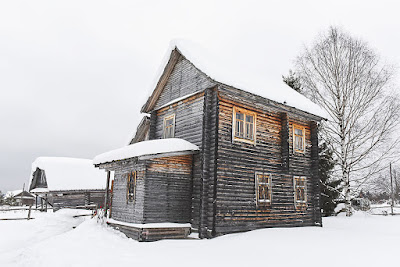 picture of Chestnyakov's house, from website rusmir-media
the house, a copy of the original house, now is a museum

After another period in St. Petersburg
Chestnyakov settled in Shablovo for the rest of his life

From 1913 until 1914 Chestnyakov once more stayed for some months in St. Petersburg, this time to get lessons from prof Kardovsky. But then the first World War began and Chestnyakov, who had been rejected for military service, returned to his home in Shablovo.

He would now stay in Shablovo for the rest of his life (1914-1961), focusing on the daily life of the inhabitants of the region, and without any relation with institutes and other artists in the Russian art world.

Chestnyakov remained active as a painter, showing a certain preference for rural and peasant life, depicting local people, often gathered in large groups and in settings with a specific atmosphere that characterizes his paintings.

He did not want to sell his paintings but kept them in his house, usually not framed, but nailed on battens. Sometimes he would give a painting to people living around.

The various pictures below of the interior of Chestnyakov's (in 2004 rebuilt) house, give some impression of his paintings. 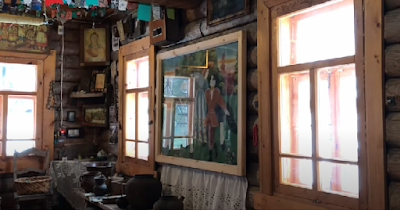 
Chestnyakov transformed the ground floor of the house into kind of a theater, where he had performances and amused the children of the village with fairy tales, which he mostly wrote himself and which also have been published (such as The Magic Apple, a collection of fairy tales, illustrated with his own drawings, published in 1914).

In his performances in the theater his paintings could function as scenery, just as his clay figures could act as puppets.

The ground floor of his house could also serve as a Kindergarten for village children whose parents had to work.

The various elements of Chestnyakov's artistic and social activities were interrelated and ultimately formed a large coherent whole. An intelligent, selfless, well-educated man, Chestnyakov saw the poverty and deprivation of the villagers, and wanted to contribute, in particular, to a better future for the children. He dreamed of a City of General Prosperity, where everyone was happy. 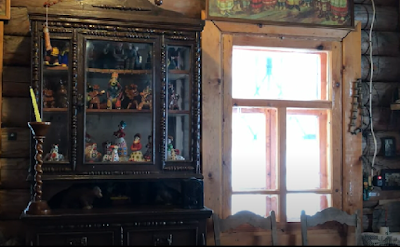 the cupboard has a small selection of clay figurines

In the 1930s, Chestnyakov -at that time in his mid 50's- finished creating paintings. He continued to give his performances, also in neighboring villages that he visited with a cart full of attributes, including some paintings as decor.

Chestnyakov died on June 27, 1961 He was in his late 80's. Villagers carried the coffin to the cemetery four kilometers away in the neighboring village of Ileshevo, where Chestnyakov was buried in a simple grave, just decorated with an iron cross.

Seven years later, in the summer of 1968 employees of the regional museum in Kostroma (some 350 km west of Shablovo) visited the Kologriv district, looking for unknown artists. An inhabitant of Shablovo informed them about Chestnyakov's legacy. which was left to waste in the now uninhabited house.

For the museum its was a historical discovery.

A number of the paintings was restored and added to the collection of the regional museum. The Museum of Local Lore in Kologriv, a town some 18 km south of Shablovo, also got a part of the paintings. 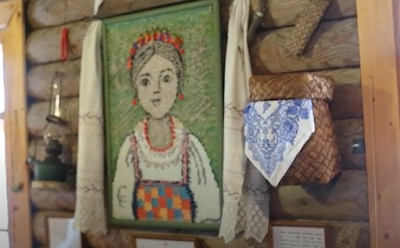 In the following years, the village began to depopulate as residents moved to neighboring towns. Today, the former village still has about ten houses.

Chestnyakov's house survived as it was during his lifetime, until in 2002 an initiative group started collecting donations for its renovation. In 2004 the House Museum opened, in 2008 it formally became a subsection of the Museum of Local Lore in Kologriv 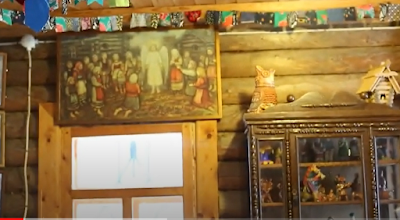 Attempts have been made to maintain the atmosphere of the original building as much as possible with the help of paintings and other parts of the former establishment that were still available.

Various (former) residents of the village who owned artwork by Chestnyakov, also cooperated by making these items available to redecorate the museum.

The museum got its own administrator.  In the 2010s there were discussions about the position of the Museum due to the recast of administrative  arrangements in the region, but -as the videos below show- in 2019 the Museum was in full operation, lectures were held and thematic exhibitions and festivals took place.

Documentation
* Article in Wikipedia
* Thesis by Igor Sergeevich Shavarinsky, Театр Ефима Честнякова как культурный феномен: к проблеме синтетической природы творчества и его восприятия (Theater of Efim Chestnyakov as a phenomenon of culture: the problem of the synthetic nature of creativity and its reception. Thesis for an academic degree in cultural studies. Ivanovo, 2016
* Website about the artist, with a biography, a gallery of pictures and texts of some fairy tales
* Article (August 2007) on LiveJournal about  the museum in Kologriv, with information about and pictures of artwork by Chestnyakov (and by Ladyzhensky)
* Article (undated) by Andrey Anokha about Chestnyakov as a photographer on website Starina44
* Article (April 2019) The Russian soul of Efim Chestnyakov on website Rusmir-media
* Article on Wikipedia about Chestnyakov's painting City of General Prosperity

Videos
* Short video with an aerial view of the (former) village of Shablovo, with some shots of the exterior and the interior of Chestnyakov's house (YouTube, March 2019, 2'39")

note
thanks to Alexander Emelyanov who alerted me to Chestnyakov