Novy Oskol is a city with about 18000 inhabitants, located in the west of Russia in the Belgorod region, bordering Ukraine.

Among the city's various parks, one stands out with a wide variety of wooden sculptures that grace the park.

This is the Pine Land Picnic Park, located in the eastern part of the city. 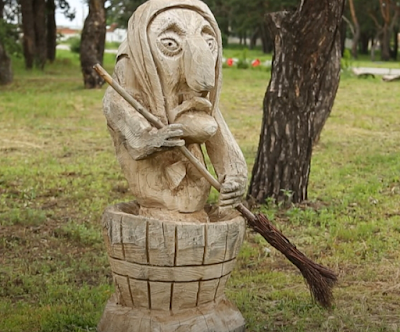 The park, located in a pine forest, has only been in operation since 2014. It was created on a voluntary basis, with the participation of residents and (local) companies.

From the beginning Sergei Starygin was involved in this initiative. Born and raised in the vicinity of the current park, he spent his childhood in the forest where the park now is located.

After primary school, he probably followed a vocational training that allowed him to establish himself as a carpenter and cabinetmaker. 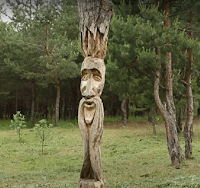 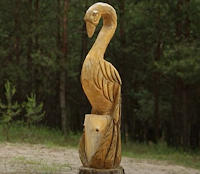 With this craftsmanship he was of course a welcome partner in the design of the new park with regard to fences, benches and flower pots.
But his qualities also lay in the field of making wooden sculptures to embellish the park.
With the production of these sculptures, Starygin has contributed greatly to the specific appearance and the artistic atmosphere of the park. 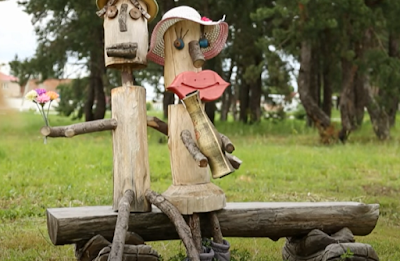 Starygin mainly makes his sculptures from trees in the area. He cuts them with a chainsaw and transforms the raw material into depictions of animals such as hares, owls, bears and flamingos, but also into human or fairytale characters.
Sometimes, as in the picture above, his work has a cartoonist, humorous streak. 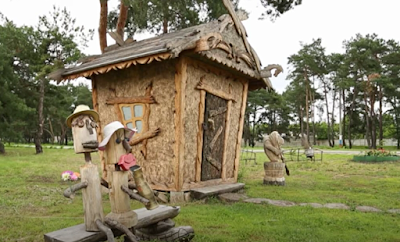 And then Starygin's work also includes a wooden house, as in the picture above.
This is probably a fairy house, not intended to be used by visitors, because for this the park has separate cabins, which are decorated with branches, as is customary in fairy tales books.
These cabins are mainly located in the front part of the park, near the entrance from where an access road leads to the heart of the park past an arrangement of some ten sculptures standing in line. 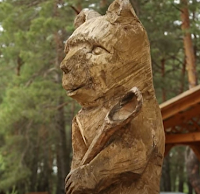 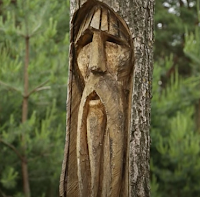 In recent years, the park has become increasingly popular.
There will also be festivities that attract public, such as a folk festival in September 2020 with performances by music and dance groups. 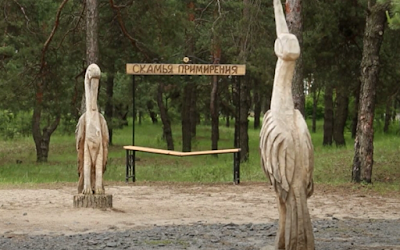 Email ThisBlogThis!Share to TwitterShare to FacebookShare to Pinterest
Labels: display of wooden sculptures, park with a variety of sculptures