The scene pictured above, with three storks on a field in the middle of urban buildings, is situated in Krasnoyarsk, a city of about a million inhabitants in the Asian part of Russia¹.
Such a scene, obviously created by a non-professional artist and located in public space in a residential area, in Russia is mostly referred to as ZEKH art. 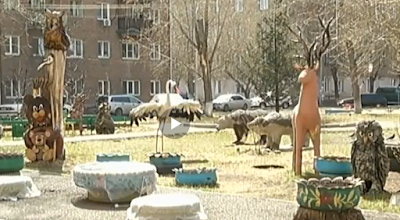 ZHEK art
ZHEK is an abbreviation that refers to an office of a Russian city in the field of housing and administration and ZEKH art has to do with the phenomenon that in Russian cities it often happens that a few more or less artistic creations are set up by residents in a location amidst urban buildings, this to cheer up the often dull environment and often also to create playground for children.
The creations usually have been made from remnants, often worn-out car tires or other superfluous items.
An account on Instagram offers a large number of photos with examples of such creations. As these photos show, such creations are usually stand-alone items or small groups thereof. 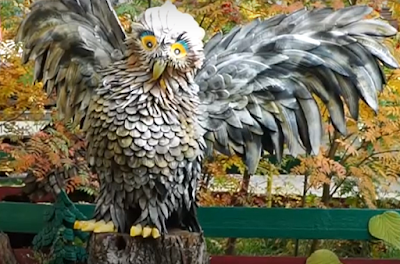 The site in Krasnoyarsk that is discussed here, however, includes such a large number of creations that, even though there is a connotation with ZEKH art, it is rather an art environment in public space.
Creating an art environment in public space
This art environment was created by Alexei Zhuchenko, who was born in 1961 and in his early years already was engaged in creative activities.
After his primary education he trained as a mechanic. He was a professional soldier from 1989 to 1997 and then had a civilian job as a mechanical engineer. 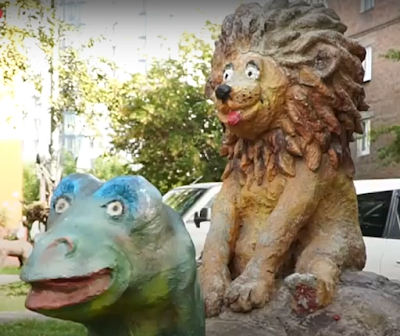 Around 2008, he and his wife moved to Krasnoyarsk, where they settled in a flat along Michurina street, where Zhuchenko had access to a space in the basement of the flat.
He used this space as a workshop and now he could express his still-present desire to be creative, like making swans from old car tires, following the example that so many others in the field of ZEKH art had set. 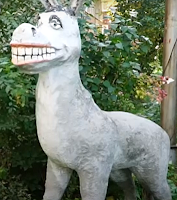 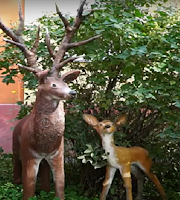 Zhuchenko was also a person who cared about the appearance of the neighborhood. He was active in keeping the environment clean and in this way he came into contact with other residents who, for example, planted flowers in the open space between the apartments.
Thanks to his involvement with the neighborhood, around 2013, in consultation with local residents, he started making sculptures of animals that, set up in the now green space between the flats, would gradually become kind of a zoo. 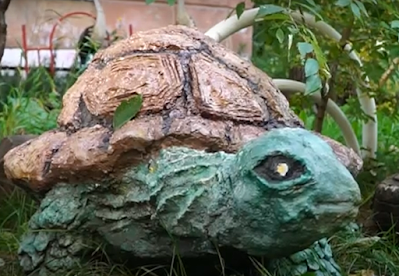 As the images in this post show, Zhuchenko had by now developed the necessary skills in making sculptures. Working with frames of wood, plywood or chicken wire, over which cement and also polyurethane foam was applied, he succeeded in giving his creations a realistic appearance.
All kinds of animals, such as bears, deer, flamingos, owls, giraffes, storks, flamingos and donkeys, were given a place in the space between the apartments.
Zhuchenko's technical prowess is evident in the image of an owl in one of the photos above. The beautiful feather dress, proudly displayed by the owl, turns out to have been made of pieces of hard rubber.
Sculptures such as a donkey or a deer, are also so strong that children can climb them. The lion cub sitting on a turtle, depicted in one of the other pictures, is probably based on a Russian fairy tale or a children's television series, just as the donkey refers to the character Shrek in a Russian animated movie. 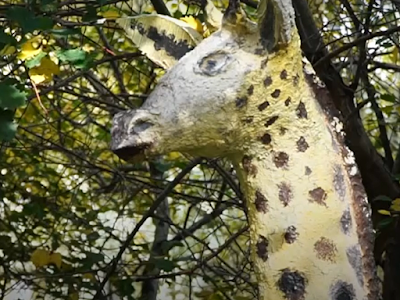 For the local authorities it isn't a problem that a space between flats is graced with sculptures, on the contrary, in 2019 the city organized a competition with the theme The best Krasnoyarsk courtyard of a residential apartment building.
And indeed, Zhuchenko's art environment along Michurina street was nominated for first place.

Note
¹ The reviews in this weblog relate to  art environments in Europe. Nevertheless, characteristic sites in the Asian part of the Russian Federation are also included, in order to give a balanced and coherent picture of the entire field of Russian art environments.
Alexei Zhuchenko
Zoo
Ulitsa Michurina 1
Krasnoyarsk, Siberia region, Russia
streetview
site can be seen from the street
Posted by henk van es at 5:17 PM