Non-resident motorists driving the D1203 departmental route just north of the French community of Charvonnex tend to slow down to get a better view of the colorfully decorated house that stands along the road.
Life and works
This Maison colorée was created by Nadine Mehly. who was born in Nancy in 1957, where she also got her primary and secondary education. After that, she worked mostly at retail companies, such as she was a sales woman at a large department store in Grenoble for over ten years.
When she got married she settled with her husband in Charvonnex in the house in question along the departmental road.
Charvonnex is a small community of about 1400 inhabitants in the east of France, close to the French Alps and the border with Switzerland.
Initially, there were no indications that Nadine would embark on such an artistic project.
Living in Charvonnex, she had a job as a cashier at a supermarket in a nearby community. When this company was closed, she became unemployed. Later she would receive a disability pension.
However, in 2003, when she was in her mid-forties, it so happened that her husband went on a motorcycle tour. At home alone, Nadine felt inspired to paint the front door of the house and she liked this so much that she also started to decorate the façade.
As she said:  "Je devais just peindre et j'ai pas pu retenir la main ni le pinceau. Quand il est revenu, il n'a pas reconnu sa maison"  (I just had to paint and I couldn't hold my hand or the brush. When he came back, he didn't recognize his house. -This quote from the article in Le Messager, see documentation)
Currently the site includes over 1200 painted stones that are part of the outer walls of the living house. They were painted on the spot, to a height as far as Nadine could reach.
As the picture above shows, Nadine also added a large number of smaller painted items, such as all kinds of masks, each shaped and colored in different ways. These masks are mainly attached to the railing of the front porch of the house.
The site also has been decorated with a variety of skulls,which one also encounters in the interior, together with various dolls and all kinds of other items, which almost completely fill the available space.
The lavishly decorated wall on the ground floor has been provided with a text in colorful capital letters, as can be seen in above picture.
This text reads: "Faut rien regretter. Revendique tes conneries. Elles sont à toi. Et surtout vis à fond. On viellit bien trop vite. La sagesse ça sera pour quand on sera dans le troux"  (You shouldn't regret anything. Claim your bullshit. It’s yours. And above all live thoroughly. We get old way too quickly. Wisdom will be for when we're in the hole).
This leaves nothing to be desired in terms of clarity .... 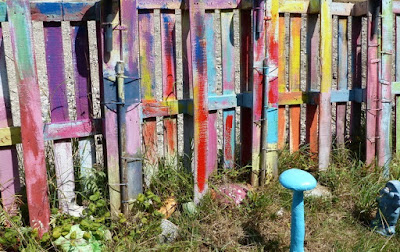 Architecturally, the site has seen some changes since the beginning of the decorations.
For example, in 2011 a hexagonal wooden summer house was placed along the side wall, a kind of gazebo, which is somewhat separate and does not seem to be part of the decorative whole.
The most significant change has to do with the fence.
Initially the house was not fitted with a structure separating the outdoor space from the street, but around 2015 a partition was added, surrounding front and left side of the house, made by linking wooden pallets as used by transport companies.
This low fence, of course very colorfully decorated, contributes greatly to the visibility and spatial character of this art environment. 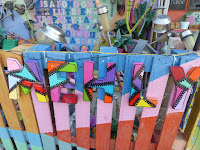 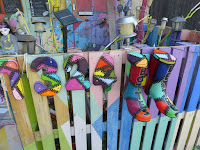 In addition, the fence offers space for some essential elements of a house, namely a name plate, a house number and a very special letterbox in the capacity of two boots, as shown in the picture topright. 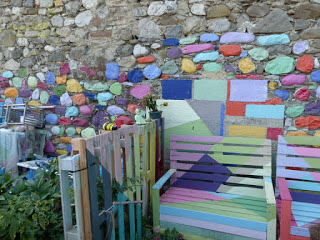 Over the years Nadine Mehly worked on the project, she got divorced.
Whether the site will survive if she can no longer take care of the decorations, for her is nothing to worry about. She takes into account that the colors and various decorations of her Maison Colorée then might disappear.
Documentation
* Entry (April, 2019) by Sophie Lepetit on her weblog, with a series of pictures
* Article (May 2018) on the website of France 3 TV (Alpes), with a video
* Article  (April 2018) on regional newspaper l'Essor Savoyard
* Article (April 2018) on regional magazine Le Messager (on p 40)
Video
* Video (1'50", May 2018) by France 3 TV (Alpes)
Nadine Mehly
Colorful house
1324 route d’Annecy (D1203)
74062 Charvonnex, dept Haute-Savoie, region Auvergne-Rhône-Alpes region
can be seen from the road
Posted by henk van es at 2:44 PM