Interior and exterior of a barn on the premises of a rural hotel in Finland together form a rather special art environment, comprising a rich collection of handcrafted recycle art.
Welcome to the Navetta Gallery, a site created by Ritva Nurmi.
Life and work
Ritva Nurmi was born in 1942. Her twin sister and her brother both became professional artists. and although Ritva also had a feeling for making art, she did not attend an art academy, a bit uncertain as she was about making art as a profession,
Only in the 1980s, when she was already in her forties, did she -as a self-taught artist- start making paintings. Because of this she got to know the use of colors and shapes, and she also gained more self-confidence with regard to being artistically engaged.
Partly thanks to this development, she decided in 1998 to make a new choice regarding her artistic work and she decided to switch to the special genre of recycle art, making all kind of creations from discarded materials.
At that time Ritva Nurmi lived in Kirkkonummi, a town near Helsinki. She had been married and had children, but now divorced, she had all the freedom to do art in her own way.
Due to reorganization, in 2001 she was fired from her job at the emergency center of the fire brigade. Since at that she moment was almost 60 years old, she probably received a (pre) pension.
In the same year she moved from Kirkkonummi to the community of Mikkeli, a few hundred kilometers to the north, where, through the intermediary of a mutual good friend, she was given an exhibition space and housing at Kyyhkylä Manor.
Built in 1630, this estate over the centuries has undergone many changes, like it served in the 1920s as a rehabilitation center for soldiers who had become disabled during the Finnish war of independence in  1918.
Today it houses, among other facilities, a modern hotel. Ritva Nurmi's workshop and art gallery is situated in a barn belonging to the hotel.
The picture above gives an impression of the exterior of the barn. It can be seen that a number of Ritva's creations have been given a place around the building.
The picture below shows the facade of the barn, with a sloping deck leading to the entrance.
To the left is a person sitting on a bench under the gallery's nameplate, a painting and one of the first creations from recycled items Ritva made. Mainly using a pair of old gloves, she depicted a cow.
The gallery, which opened to the public in 2003, includes Ritva's paintings made before 1998, as well as the large collection of recycled art she made in the following years.
The gallery is open to visitors all year round. There is no entrance fee and Ritva does not sell her work.
In Ritva's view the gallery should offer an atmosphere of happiness, joy and beautiful experiences. The energy of money should not be given a place there.
In the years leading up to the Covid pandemic, she was in the habit of welcoming visitors with a hug.
When making creations, Ritva also sees herself more as an intermediary, like she says that when busy with a new creation, beforehand she does not fully controls what comes about. It seems the ideas come from elsewhere, and she is often surprised at what she achieves.
Besides the clothes for the various creations, Ritva also makes her own clothes and other personal gadgets, such as a purse or beret
The red-colored garment she's wearing in the photo above is reminiscent of the clothes worn by Sue Kreizman, the self-taught artist who lavishly decorated the interior of her home in East London.
The photo above also shows a bird in the bottom right corner. This one was made from a former handheld vacuum cleaner.
Likewise, Ritva has used all kinds of household appliances and garden tools for her creations, as well as bicycle helmets, boots and all kinds of clothing, just whatever was available ...
The space outside in front of the barn also has several decorations. For example, there is a path towards the entrance that is made of old CD discs, lined with all kinds of small structures, with a tree made of wellies at the end.
The grounds outside also feature some life-size creations, such as a blue-robed warrior with a shield 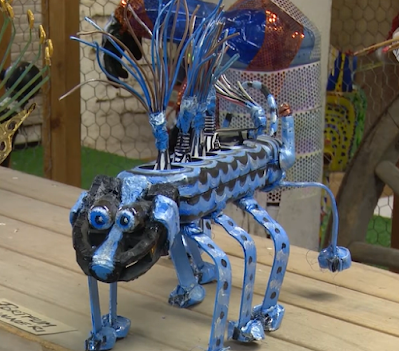 Ritva hopes that when she becomes too old to take care of the gallery, or if she has passed away, the city of Mikkeli will provide this care.
Documentation
* Article by Minna Tuuva on website ITE-net
* Article (September 2019) by Tiina Suomalainen on Finnish website Seura, with some informative photos
* Article (January 2019) by Päivi Vento on Finnish website Suomenma, also with some photos
* The website of the hotel has a short referral to the gallery, with a photo of Ritva Nurmi with one of her life-size creations
Video
* Video by Artenomedia Oy (2017, YouTube, 2'29")
Ritva Nurmi
Navetta Gallery
Kyyhkyläntie 6, 50100 Mikkeli, Southern Savonia, Finland
the site can be visited all year,
no entrance fee
Posted by henk van es at 3:55 PM