Bergen op Zoom is a municipality of about 66,000 inhabitants, located in the Dutch province of North-Brabant.
Fer Geerts, a resident of this city has graced his garden with an extensive structure comprising miniature scenes inspired by the architecture of the Greek island of Santorini.
Geerts was born in the early 1950s and in the 1980s he and his wife passed various holidays in Greece. Inspired by the atmosphere of  the Greek islands, in 1987 he started building the model, an activity he shared with a lot of other activities.
So all together, it would take him some thirty years to reach the magnitude the creation has today.
The image above gives an overall picture of the creation, which has a size of 2x4.5 meters. The entire structure stands on a platform composed of a number of separate modules, each of which can be moved independently. The interconnections of these modules, however, are hardly noticeable when looking at the creation.
Within the creation different heights occur and the buildings as present in the model slope upwards, as is also the case in Santorini's architecture.
Fer Geerts mainly used polystyrene for the construction of the buildings, generally carried out on a scale of 1:70. For the additional elements, such as canopies on the houses, shutters on the windows, chairs and tables on the balconies, deck chairs on the roofs, sails on the windmills and the like, all kinds of suitable bits of material were used, such as reed mats, pieces of wood or cardboard. 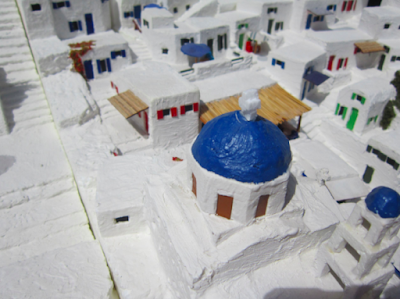 These additional elements have been manufactured with great care and this contributes greatly to the fidelity of the image conveyed by the creation.

This is further enhanced by the use of the colors blue and white, which are characteristic of the architecture of the Greek islands in the Cyclades archipelago.

This use of colors was also very decisive for Fer Geerts, as he said in an interview:

That's the real Greek atmosphere you often see in pictures. The white houses and blue roofs were the inspiration for me.

Indeed, in this art environment the architectural atmosphere of Santorini is unmistakable. 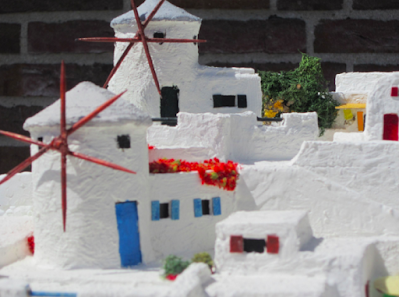 Incidentally, the creation as a whole is not really a replica. This only applies to a number of structures that have been precisely counterfeited. Other parts are based on fantasy.

As mentioned, the creation consists of a number of modules. There are now 37 blocks, which fit together. This makes it easy to store the art environment, for example during the winter, or expose it partly in a room in the house.
The compartmentalization also offers the possibility to easily transport the creation to a temporarily exhibition, such as at a holiday fair or in the window of a shop.
The site is not open to the public. 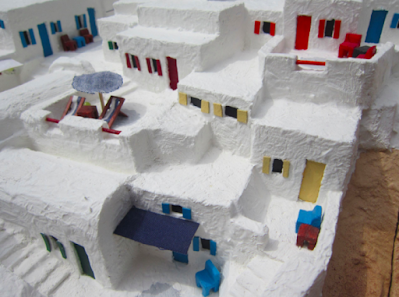 Documentation
* Website about the model, by Fer Geerts, with a page with referrals to a variety of media that paid attention to the model
Here is a small selection:
* Article (June 1, 2020) on the website of Omroep Brabant (Broadcasting Brabant)
* Article (May 4, 2021) in newspaper Greek Reporter
Video
* Video (1'10", May 2020, YouTube) by Omroep Brabant (Broadcasting Brabant)
Fer Geerts
Santorini in miniature
Bergen op Zoom, Netherlands
no public visits
Posted by henk van es at 3:44 PM