The picture above shows the frontside of a house in the small community of Łanięta -some 600 inhabitants- located in the centre of Poland.
This is the house where until recently Danuta Szudzińska (1946-2021) lived, a self-taught artist who has become known because of the fresco decorations she added both to the exterior and the interior walls of the house.
. 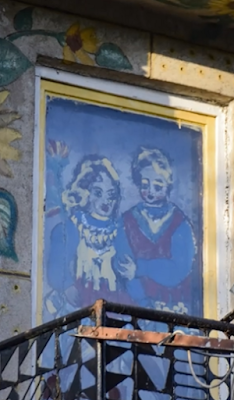 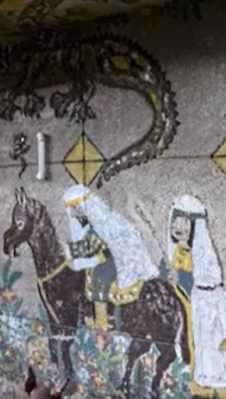 Although the very first image is not very clear, one can see that next to and below the windows on the left, geometric decorations have been applied, while under the decorated balcony at the right a scene with a person on horseback is situated.
The two images above show some details of the scenes on the facade, left a fresco of a man and a woman, situated on the balcony behind the TV-receiving dish.
The image on the right shows a scene with a man on horseback, followed by a woman, both dressed in an oriental manner, perhaps depicting Mary and Joseph's flight into Egypt. The image under the balcony itself, apart from this couple, also has two giraffes on the left and on the right a large animal standing on its hind legs, perhaps a bear. 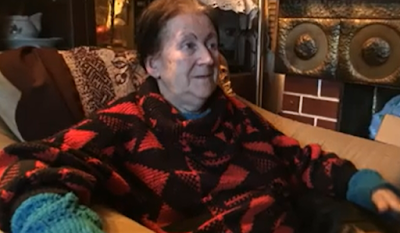 The image above, made in May 2020, portrays Danuta Szudzińska in her mid seventies. Little or no information can be found on the internet about her life and work.

Radek Labarzewski, who made he video referred to below and visited her in May 2020, said that she created  for herself and her loved ones. He noted that Danuta Szudzińska wasn't hurt by criticism, but that she was happy when someone appreciated her creations.

Because there is virtually no information available about her, comments and explanations on the frescoes she made, are also lacking in the public sphere.

So although the following images give a good impression of Danuta Szudzińska's way of paining the frescoes on the indoor walls, the accompanying texts contain a lot of assumptions. 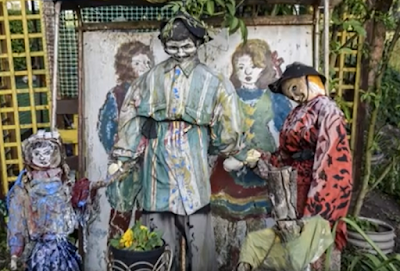 Above a scene of probably a father with his daughters. The father, perhaps in a peasant smock, stands in the center, holding hands with two girls to the left and right, and these three stand in front of a portrait of two more girls. 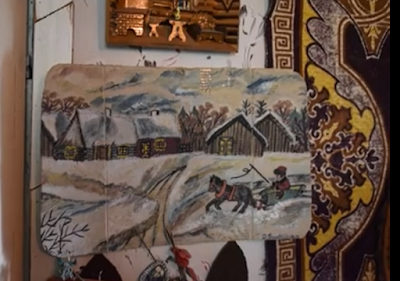 The scene depicted above shows a winter landscape with a man in a sleigh, pulled by a horse, with farmhouses in the background. 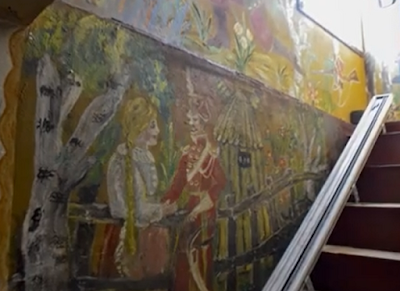 The scene above, on the wall behind the ascending staircase, shows two people in a pleasant encounter, with a tree on the left and a structure that resembles a mill on the right.
Other women who decorated their interior with frescoes
In the field of art environments in Europe, there are some more examples of somewhat older women who added frescoes to the interior walls of their house, such as Polina Rayko (1928-2004) from Ukraine, Enni Id (1904-1992) from Finland and Bonaria Manca (1925-2020) from Italy. With regard to all three artists, after their deaths or prior to that, activities have been undertaken to give their house, including the works of art therein, a protected status, this in order to preserve the site for the future.
As for Danuta Szudzińska's art environment, it has been reported that the family is of the opinion that the decorations should be preserved for the future.
Documentation
* No articles about Danuta Szudzinska's work or similar resources have been found on the internet
Video
* Video on Facebook (0'.14") compiled in June 2021 with photos taken in May 2020 by Radek Labarzewski

Danuta Szudzińska
Łanięta, Lodz region, Poland
no information available about visits by he public
some decorations can be seen from the street
streetview
Posted by henk van es at 9:48 AM