The French community of St-Pierre-du-Vauvray, a town of some 1300 inhabitants, located about 120 km north-west of Paris, lies on the left bank of the Seine. The towpath that used to be on that bank is partly still present. It starts where the Quai de Seine, located in the town's built-up area, ends.
Along this former towpath, now a rural road named route de l'Ormais, there is a sculpture garden referred to as Au Moulin Fleuri (At the flowery mill).
Life an works
This garden was created by Edmond Delaporte, who was born on June 11, 1934, in Blonville sur Mer, south of Le Havre on the Channel coast and died on November 6, 2020 in Evreux, about 25 km from St-Pierre-du-Vauvray.
The internet hasn't much biographical information about him. For example, it is not clear whether he practiced a particular profession.
With regard to the origin of the sculpture garden there is somewhat more information. It has been reported that in 1980 Delaporte acquired the land on which the garden would be laid out. This area, located along the above-mentioned former towpath along the Seine, was then still rather untidy.
Delaporte had a passion for making sculptures of rural scenes with animals and he bought the site along the Seine with the intention of transforming it into a sculpture garden. A self-taught artist, in 1980 he started the project, that would keep him engaged for over thirty years.
When Delaporte bought the site, he lived in Evreux, about 28 km south of St Pierre-du-Vauvray. He would live there all the years he was making sculptures, working on his creations in general during the winter months, using a garage as a workshop.
With his partner Marguerite, who supported him in every way in his creative activities, over the years he must have traveled many times up and down between Evreux and St Pierre-du-Vauvray. 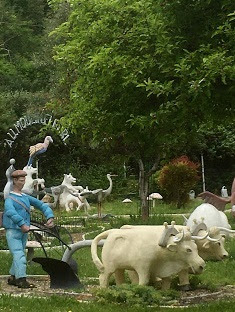 The various images show that Delaporte's decades of creative activity have produced a lovely garden with a rustic feel, where sculptures are arranged in groups on small islands of gravel nestled in an area of green grass.
It has been said that Delaporte's creative work was inspired by that of Robert Vasseur (1908-2002), who transformed his house and garden in Louviers, a community some nine kilometers to the west of St Pierre-du-Vauvray, into an art environment. 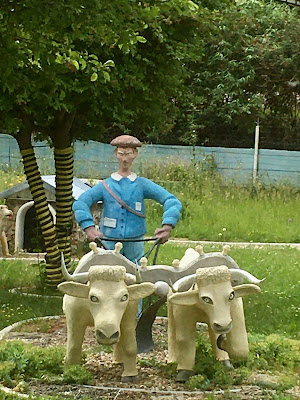 From the point of view of geographical proximity there is something to be said for this.
Vasseur, however, incorporated a lot of mosaic into his creations and seen from the use of material the depiction of persons in Delaporte's work is more similar to that of René Escaffre (1921-2008), who enlivened his garden in Roumens, dept Haute-Dep. Garonne with scenes of daily life in rural villages in France as it was in the first half of the 20th century.
Considering the depiction of people as done by Delaporte, it seems that he worked from the same point of view. for example portraying farmers manually plowing with oxen. 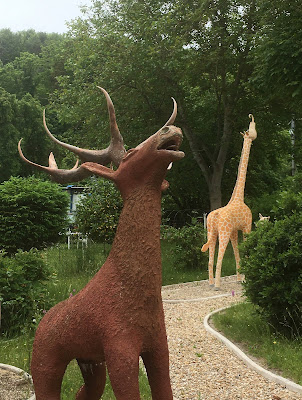 The way Delaporte portrayed animals is also very similar to Escaffre's.
All this does not mean that Delaporte knew Escaffre's art environment. It's just a resemblance in their way of portraying humans and animals.
The garden has been saved for the future
As Delaporte got older, it became more difficult for him to maintain the garden, so he probably welcomed that in 2019, when he was 85, the Agglo Seine-Eure, a regional conurbation, was willing to buy the garden.
The municipality of St-Pierre-du-Vauvray, part of this Agglo Seine-Eure, showed great commitment to the art environment within its borders when early July 2020 it arranged a major refurbishment, this with the help of a large number of volunteers from the city.
The garden was stripped of too exuberant greenery that had grown up in many places, and paths between the different scenes with sculptures were renovated or re-laid. 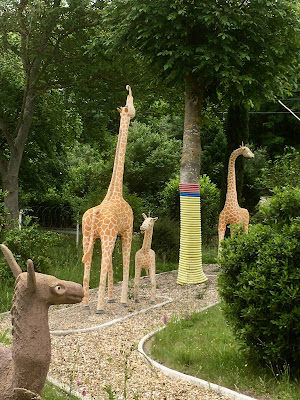 Documentation
* A sign at the entrance to the garden gives some information about Delaporte
* Message on Facebook from the municipality of St Pierre-du-Vauvray regarding the death of Edmond Delaporte
* Another message of the municipality, this one about the refurbishment in July 2020
* The site had a review in Bruno Montpied's Le Gazouillis des éléphants. Paris (Ed. du Sandre), 2017
Edmond Delaporte
Au Moulin Fleuri
along the route de l'Ormais
St-Pierre-du-Vauvray, dept Eure, region Normandy, France
can be visited by the public
the route de l'Ormais can be closed for cars during
summer holidays, this to maintain tranquility for residents
Posted by henk van es at 7:02 PM