The above photo gives a global impression of an elongated mosaic decoration applied to the rear of a house in Yekaterinburg, the fourth-largest and a main cultural and industrial city in Russia.
Life an works
It's a creation made by Lyudmila Kneller, who was born in March 1979 and after her education and studies became a lawyer in Yekaterinburg. 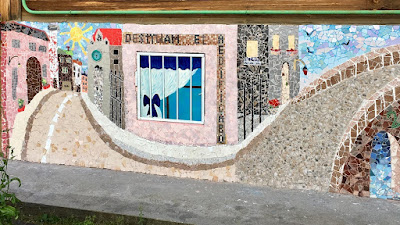 As a lawyer Lyudmila has a busy job, so she opts for soothing activities in her spare time, such as making photographs, making kind of paintings by arranging all kinds of buttons and decorating flower pots with mosaics.
In 2019 she came up with a special idea regarding the creative activities in her spare time. It so happened, that at that time, quite a lot of material was available to work up in mosaics and the idea arose to transform the part of the rear wall of the house located under the windows, into a large-scale mosaic decoration. Incidentally, the stock of shards turned out to be insufficient and neighbors and acquaintances had to help with required material to make the entire mosaic of 15 m². 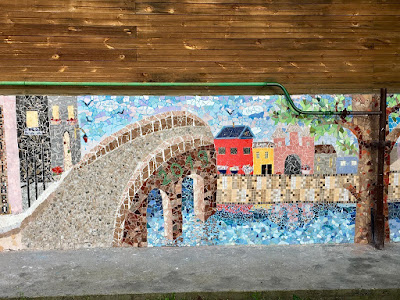 Assisted by a friend, Lyudmila made a series of sketches of the scenes she wanted to portray in mosaic. Initially she fixed the mosaic pieces on the wall using stencils made from the drawings, later the decorations were established more freehand.
In the design of the mosaic clever use has been made of the gas pipes that run along the wall, a horizontal pipe delimits the decoration at the top, and a vertical one has turned into the trunk and a branch of a tree.
The second image from the top shows a window with the inscription "destruam et aedificabo", Latin for "destroy and build", a concise description of what creating a mosaic implies.

The rather dominant arch bridge in the mosaic is reminiscent of Amsterdam. In the past offering traders in a boat an easy passage with their merchandise, but almost impossible to pass without assistance for traders with a pushcart, these bridges still dominate the scene in the center of Amsterdam.
Following a suggestion from her mother, Lyudmila provided a lamppost in the mosaic with a red-colored piece of mosaic, reinforcing the suggestion that this part of the mosaic depicts Amsterdam's red light district. 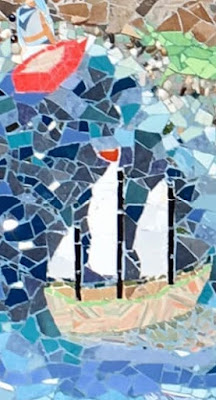 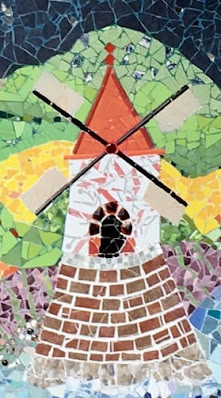 A scene with a mill (top left) and vessels (top right), one will not find in the red light district of Amsterdam, but just north of the city is the Zaanse Schans, an area with a variety of mills along the busy river Zaan.
Making this mosaic decoration was a one-off project for Lyudmila.  It took her 2,5 month in the summer of 2019 to complete it.
The creation is located on private property and cannot be visited by the public, so no address is mentioned below. 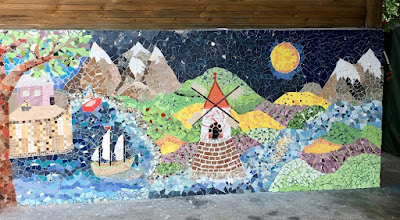 Documentation
* Article (July 2020) in regional newspaper E1, with pictures of the mosaic decorated wall and of some paintings made from buttons and other specific materials
* Article (July 2020) on Nastroy net, also with pictures of the decorated wall and of some paintings
Lyudmila Kneller
Mosaic decorations on an outside wall
Yekaterinburg, region Sverdlovsk, Russia
no public visits
Posted by henk van es at 2:18 PM