In the Haut-Rhin department in the Alsace region in France the town of Zillisheim is home to a rather special art environment, namely a rather large collection of gnomes, spread over various areas of a private house.
Life and works
This site was created by Joseph Ress (1934-2008), who was a farmer during his working life. 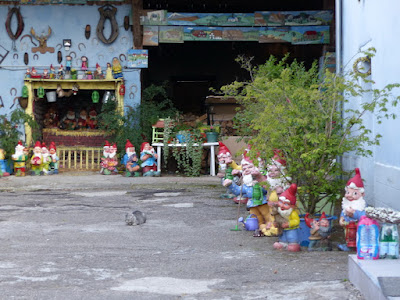 Joseph Ress was a special person. He felt most comfortable during periods such as around Christmas, when the house could be lavishly decorated and most people would be in a good mood.
And so he probably got the idea that the house could also be decorated in a more permanent way. When exactly he started collecting gnomes is not known, but seeing the size of the collection, it seems that he started at a young age. 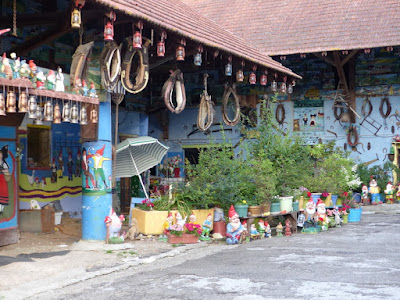 The gnomes were grouped in all kinds of places in and around the house, not only in the garden, but also in various courtyards, in the garage and in the sheds. 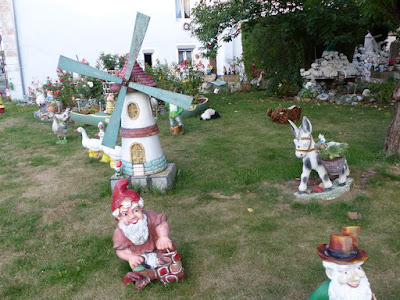 The images above and below of the garden show that in addition to the gnomes, other decorations were also placed, such as small-scale windmills, small sculptures, and the like. 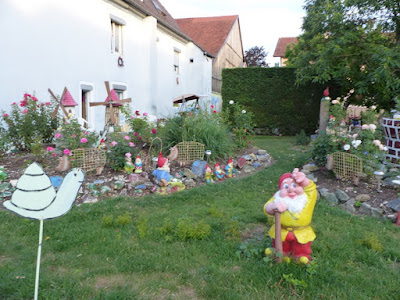 In addition to various arrangements of gnomes, several walls of the house were also provided with all kinds of colorful decorations.
The two images below give an impression of this.
The first image shows oil lamps hung in a row in front of a wall that is painted with pictures of fairytale figures and some gnomes. 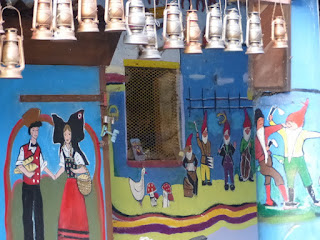 The other image (below) also shows an arrangement of gnomes on a table, from which also hang some oil lamps. The table stands in front of a decorated wall, this time with horseshoes and other decorations, including attributes from the farm. 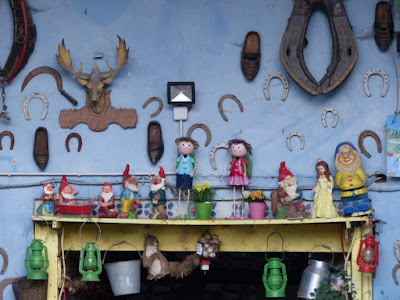 On a blog started by Joseph Ress in February 2007, he writes in July of the same year that, stricken with cancer, he finds it more and more difficult to care for his gnomes.
Aged 74, he passed away on November 16, 2008,
The family continued to take care of the collection of gnomes, which - as can be seen on Google Streetview - was still in good condition in 2019. A granddaughter has continued the weblog, adding a variety of colorful photos.
Documentation
* Post (August 14, 2021) on the weblog of Sophie Lepetit
* Weblog Le logis des nains .(created February 2007), continued after Ress died by a granddaughter
Joseph Ress
The shelter of gnomes
8 Grand Rue
68720 Zillisheim, dept Haut Rhin, region Grand Est, France
can be seen from the street
streetview (2019)