Sergey Tokarev's art environment in the village of Galinskoye in the Vologda region in Russia, in addition to a number of wooden sculptures, for the most part includes all kinds of handmade wooden boats.
Life and works
Sergei Alekseevich Tokarev was born in the 1950s in Cherepovets, a town in the Vologda region, north of Moscow in northwestern Russia. He got a technical education, and for some time worked in the navy and as a car mechanic.
He was very interested in ships and this interest became so great that in his thirties he moved to the village of Galinskoye, where he set up a woodworking workshop on a piece of land that over time would be transformed into an art environment.
Galinskoye is a small village, some 70 km from Cherepovets. In 2010 it had some ten inhabitants.
The way Tokarev processed logs into wooden sculptures, can be seen in the picture above, a shed on his property decorated with a large blue fish, installed beneath a parade of small wooden personalities.
The image below seems to depict two somewhat older characters 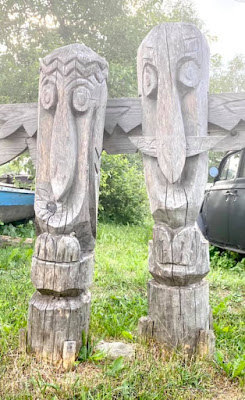 But in addition to these wooden sculptures of various characters, from the time he started the site in the 1980s or 1990s, Tokarev mainly produced models of boats, both larger and smaller ones..
The small models, of which he made at least some 700 over the years, were stored on shelves on the wall of the workshop or in sheds on the property.
The large models were given a berth on the site.
In the course of the 2010s, the collection had grown to such an extent and Tokarev was so eager to share his knowledge of boats with others, that he decided to give the collection a public character by designating it as a museum, named Interaktivnyy Muzey "Galinskiye Parusa" (Interactive Museum "Galinskie Sails").
The museum was officially opened in June 2016.
The designation Museum implies of course that visitors are welcome, and indeed Sergey Tokarev especially welcomed groups of people, with whom he shared his interest in boats by offering them a special program.
Conversely, certain groups, such as families with children, school classes or people celebrating a birthday, like to visit the site because it provides an enjoyable outing.
Tokarev has put together a well designed program to introduce visitors, both old and young, in a fun, playful way to the history of shipbuilding and all kinds of transport with ships. 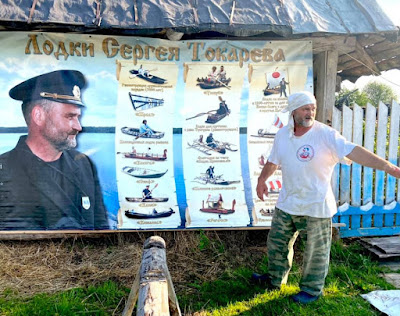 He not only explains various kinds of boat models, as in the image above, but visitors can actively participate in, for example, paddling a boat on dry land, this being done standing upright, an activity that is often undertaken with great pleasure. 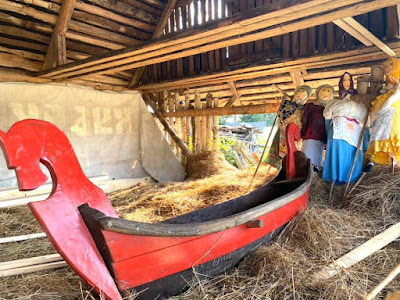 Tokarev, who introduces himself as the jetty commander, actively informs both the youngest and the adult visitors to all things boating, both small log boats and larger models, as can be seen in the images above and below. 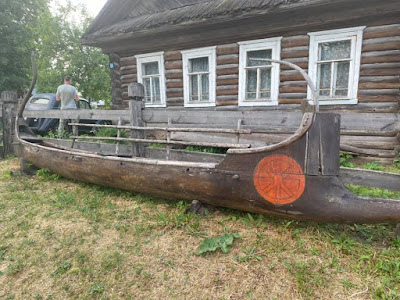 He manages to create a festive atmosphere, fluttering with flags. It is also a special moment when one of the visitors is asked to fire a joy shot from an old cannon.

An organized visit with guided tour and explanation, and in between all kinds of assignments and activities, lasts about three hours and most visitors experience the atmosphere and the program as very pleasant and informative.

The program ends in a tea house with a drink and a bowl of goodies.. 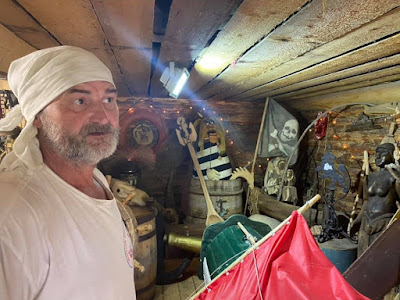 In the Vologda region, an annual competition in the manufacture of wooden boats takes place in the Ulst-Kubensky district. Sergey Tokarev has been participating in this competition since 2005, and in 2009 he won the first prize. 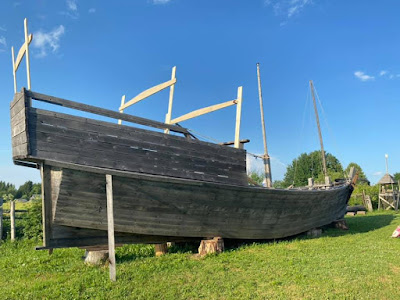 Documentation
* Pictures on Instagram
* On Russian website VK a variety of reactions and photos by visitors of the site
* Article (July 2016) on website Moyastrana
* Article (May 2016) in a regional newspaper
Sergey Tokarev
Interactive Museum "Galinskie Sails"
Village of Galinskoye (near Kirillov), region Vologda, Russia
visitors welcome (groups on appointment0
Google Maps (with a series of pictures of the site)
Posted by henk van es at 11:38 AM