Vangelis Vlepakis, an inhabitant of the community of Kefalas, located on the far east coast of the Greek island of Crete, as a non-professional artist has enriched the community with a number of shell and otherwise decorated stone structures, such as the Monument of Kefalas (as in above picture), a chapel dedicated to Agios Phaourios and a site named Love the forest.
He also embellished the garden around his house with stone structures and other decorations. 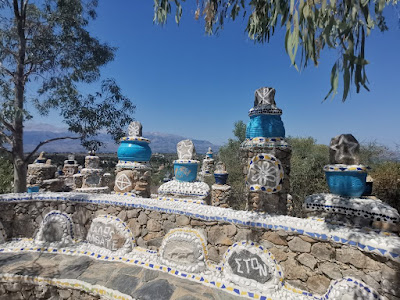 The internet has just a few sources about these art environments and the non-professional artist who created them in general is just referred to as Vangelis. There is one source (on a geocaching website) which mentions a more complete name, which is Vangelis Vlepakis (O Erimitis). In this post the designation Vangelis will be used.

Born in Kefalas, in his younger years Vangelis lived for ten years in a cave by the sea, which he had furnished as living quarters with his own hands. He then lived and worked in Athens and returned to Kefalas around 1990.

Vangelis then began making creations from locally available natural stones and after a visit to Barcelona, where he saw Gaudi's work, he started decorating his own creations with all kinds of colorful elements 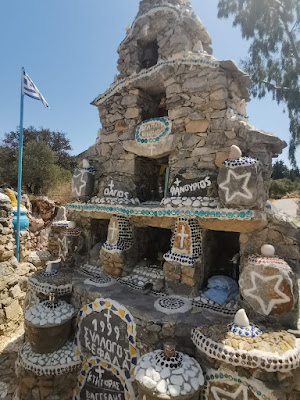 Vangelis is the curator of a museum located in the center of Kefala named Politistiki Estia Kefala (Kefala Cultural Center).

This museum, housed in an old building in the center of the village, displays all kinds of items donated by the villagers, such as photographs, examples of textile art and objects of daily life from a bygone era, that give and impression of life in the village in former times.
In an outbuilding farm implements and various tools are on display. 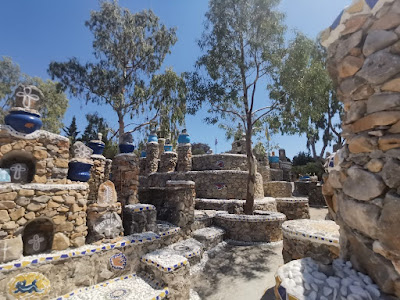 This creation by Vangelis is located just outside the built-up area of Kefalas, along the road to Vamos. Texts on the structure welcome visitors to Kefalas, and because many tourists drive along this road, the Monument is relatively well known and many photos are taken.

The art environment includes a number of more or less triangular vertical stone structures, resembling facades of small chapels. These facades are provided with recesses in which smaller decorations can find a place. 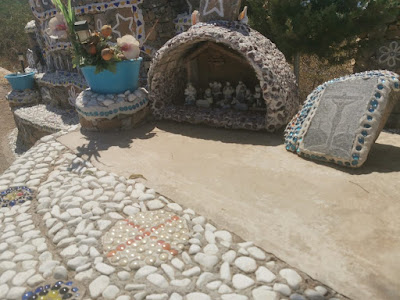 The facades have drawings of stars and various inscriptions. One of these inscriptions mentions the year 1999, which could be the year in which the Monument was completed.
The art environment is not one whole, but it has different parts, each of which has been given a specific shape, such as the structure in the image below, which is composed of a number of tower-like parts.
In addition to the decoration with shells that is characteristic of the entire site, what is striking about this part of the creation is the decoration with blue pots, a decoration that also can be seen in other areas of the site. 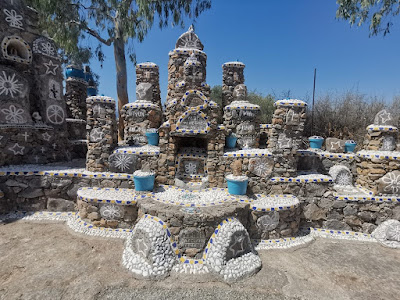 The house of stone creations
The House of Stone Creations in Kefalas. where Vangelis lives with his wife Jan. is a special place.
The house was built in 1995 and over the next ten years the exterior around the house has been transformed into in art environment, full of stone structures with the same characteristic as the Monumento Kefalas.
The house is also referred to as Villa Jan. 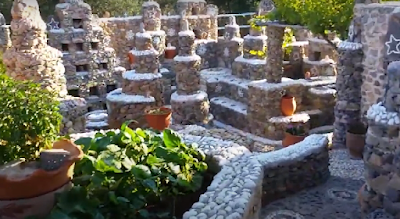 The video in the documentation -at the bottom of this post- gives an impression of the spacious design of the art environment, and the many elements that indicate that this is a site in the garden of a house.
Chapel dedicated to Agios Phanourios
An open air chapel, created by Vangelis in his characteristic style, is dedicated to Saint Agios Phanourios, who lived in Crete around 1400. About him has been said that he saved many inhabitants of Crete from death when the Ottomans invaded the isle.
An inscription on the creation says it is 700 meters away from Vangelis' residence.
Love the Forest 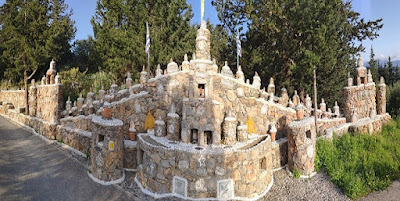 The stone structure Love the Forest is the most recent of all creations made by Vangelis. The characteristic way in which the artist gives shape to his creations is once again clearly recognizable.
Exact locations of this site, the Chapel of Saint Agios and the House of Stone Creations are not known.
Documentation
* Website Piristys by Laura Piri
* Article about Kefalas on the touristic website Kreta Griekenland
* Website of the Greek Branch of the Mediterranean Garden Society, with a referral to Vangelis' garden
* Entry about the House of Stone Creations on website Geocaching
* Entry about the Chapel dedicated to Agios Phanourios on website Geocaching
* Entry about the stone structure Love the Forest on website Geocaching
* Article in Wikipedia
Video
* Video (May 2016, 3'42", YouTube) by Martin Preedy

Vangelis Vlepakis
Decorated stone structures in Kefalas
The creation Monumento Kefalas is
located just outside the village on the route to Vamos
About the locations of the other creations no information is available
Kefalas, Crete, Greece
Posted by henk van es at 4:07 PM