The small community of Východná -some 2500 inhabitants- in  the Žilina region of northern Slovakia was home to an art environment that included a variety of replicas of famous buildings and statues from all over the world.
Life and works
This art environment was created by Martin Sabaka , who was born in Východná on September 1, 1925. 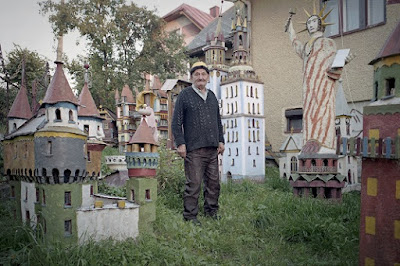 After primary school, he trained as a shoemaker. He was in military service from 1945 to 1947 and then he worked as a shoemaker. Sabaka married in 1950 and got two sons, Martin and Jan.
In 1962 he got another job, he went to work at the transport department of the railway station of Poprad, some 30 km east of Východná. This job he had until his retirement in 1986. 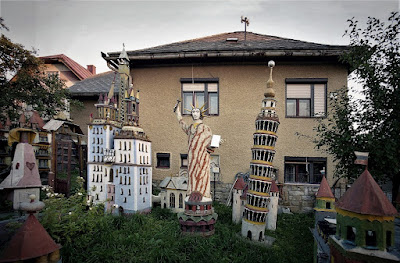 Once retired, Sabaka in the late 1980s began making creations he installed in the garden at his house in Východná.
The general theme he followed was the manufacture of replicas of famous buildings and monuments from all over the world.
Sabaka's dream of one day traveling the world has not come true and he has never been outside  Slovakia.  As he has said in an interview with a newspaper:
"This region has never been rich and in the past it was not even possible to travel around the
world  as it is today. So I took the world to the garden" 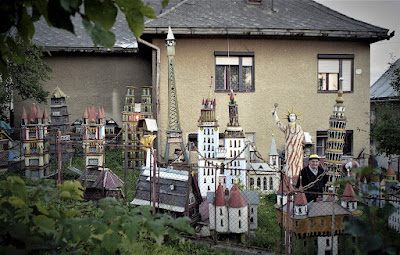 With information gathered from all kinds of books and magazines and by collecting material on a nearby dump, Sabaka started making replicas of well known buildings, such as the Eiffel Tower from Paris, the Statue of Liberty from New York, the Leaning Tower from Pisa, the Tower Bridge from  London, the statue of Christ the Redeemer in Rio de Janeiro and the like.
Sabaka's own country is represented by Bratislava Castle, a massive building with four corner towers, located in the middle of the capital Bratislava, on a hill directly above the Danube River and by Bojnice Castle, a Romanesque castle built in the 12th century, one of the most visited castles in Slovakia.
In the approximately thirty years that Sabaka has worked on this art environment, he has made more than 20 creations, some of which are 3 meters high. 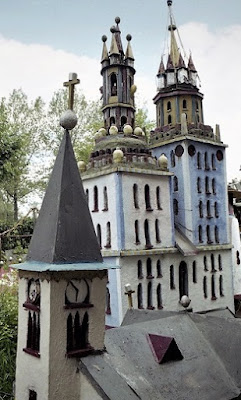 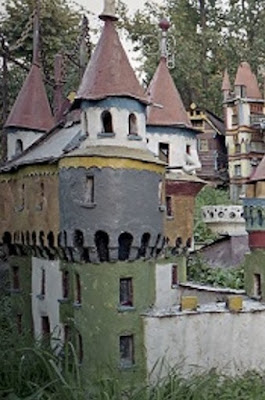 Sabaka worked with great eye for detail. This can be clearly seen in the images of the towery structures above left and right (crops of some of the four photos more upwards).
In the buildings depicted on the left the windows have been carefully cut, the middle ones with an added small landing at the bottom, while the upper elements of the towers are meticulously finished with balustrades, spherical decorations and mini-towers
The windows in the buildings depicted on the right are also neatly deepened and fitted with frames, while the upper round parts of the towers rest on carefully crafted buttresses.
It has been reported that Sabaka had provided the Eiffel Tower with small-scale visitors, who were watching down and that a small boat with tourists was sailing near the Tower Bridge.
After Martin Sabaka passed away on January 3, 2016, his house probably changed hands, what entailed that the art environment could not be maintained and that the creations had te be removed..
Fortunately, most of the creations have been preserved. They are stored in a storage facility managed by Sabaka's son Martin. who with other interested parties is looking at the possibilities of relocation of the creations in a new location.
Seen from the field of art environments, it would be a good development if Martin Sabaka's creations, which are of relatively high quality, would get a suitable, publicly accessible place in the community.
The photo below, by Pavel Konečný, gives an impression of the current storage.
Documentation
* Article (July 2004) in regional newspaper SME
Martin Sabaka
Replicas of famous buildings
Východná, Žilina Region, Slovakia
site doesn't exist anymore, but the creations have been stored
Posted by henk van es at 5:38 PM