Unlike the colorful frescoes painted on the houses of the Polish village Zalipie, the houses of the Slovakian village Čičmany have a decoration of white ornaments, usually geometric in nature and sometimes with schematic realistic motives, such as depictions of birds and other animals.
The village dates back to 1272 and has about 200 inhabitants, who mostly live in black wooden half-timbered houses with ridge roofs.
The tradition of decorating the houses started in the early 1800s.
The village is located in a swampy area and to protect their house from humidity the inhabitants initially decorated the corners with mud, which later changed to the use of white lime, which also was added to other parts of the outside walls.
White lime on a mostly dark background is of course striking and residents, mainly women, started to make decorations of the white lime, in which it is remarkable that gradually a more or less uniform style was developed. 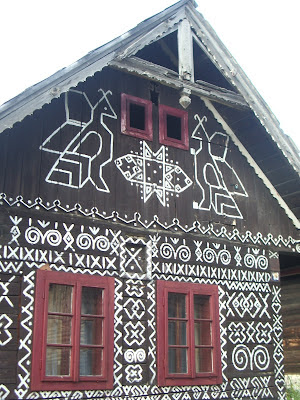 In 1921 the village was hit by a major fire. Many houses had to be repaired.

The Slovak government arranged for funds to be made available for this recovery. This allowed Čičmany to keep the character it had for ages. 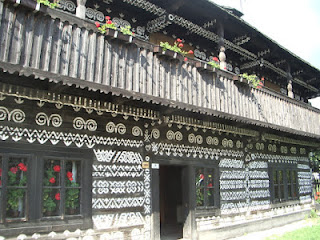 In 1977 a government decision was made to the effect that the decorated houses and buildings were designated as cultural heritage.

In this way 136 houses and buildings got a protected status and became  part of the world's first folk architecture reserve. 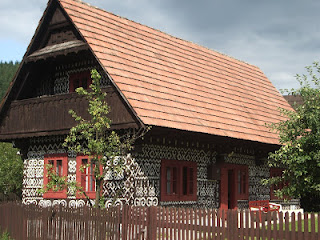 In Čičmany two houses, which also function as a museum,  can be visited.

The Radenov house, one of the best preserved houses, has a general exhibition. It's open all year.

The other one is the neighboring Gregorov house, which has an ethnographic exhibition on history and folklore of Čičmany and its surroundings. 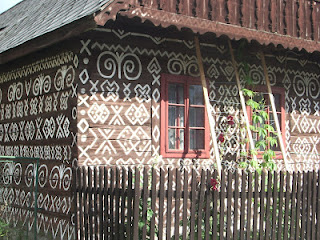 The decorations that appear on the houses in Čičmany are quite original.

They can be seen in embroidery in costumes worn by residents, but also in images on tablecloths and other forms of textiles.

Inhabitants of the village focused for a while on making handkerchiefs decorated with motifs such as on the houses, later they also started making felt boots, with applications based on these motifs. 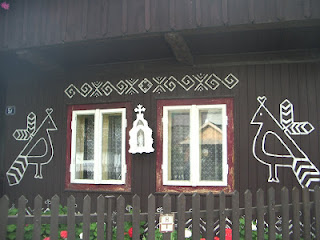 * To see more videos about Čičmany on YouTube, click here
Decorated village of Čičmany
Žilina region, Slovakia
decorated houses can be seen from the street
Posted by henk van es at 4:54 PM