The house pictured above still can be seen along a departmental road just outside the community of Antignac in the Auvergne area in France, although the sculptures that in 2003 still decorated the frontside, meanwhile have been removed.
Life and works
François  Aubert (1902-1982). a bricklayer who lived here, started in 1949 to give the front and the side of his house a different look.
In various places of the three-storey high building he made platforms that were connected with stairs with various types of handrails.
The facade of the ground floor got four niches crowned with a semicircular arch of red bricks with a narrow strip of white stone at the top.The most left niche, in which a red door, decorated with a skull, had narrow pillars left and right, again topped with a semi-circular arch, this time of gray stone. 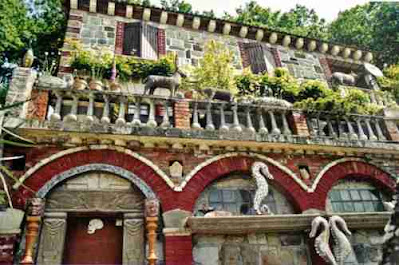 The walls of the other niches were fitted with a window and with square gray colored paving stones, as well as a horizontal beam just where the semicircular arches begin. Next to the niche on the far right, a staircase goes up to the first floor where the main entrance is located.
The semicircular arches of the niches support the floor of the terrace on the first floor. This part of the construction was also colorful, with the thickness of the floor, as well as the front of the supporting cross beams provided with a distinctive yellow color. Currently these yellow colored aspects have disappeared.
The balustrade of the balcony also got a special design. This by a division into compartments, corresponding to the niches of the ground floor, each compartment comprising eight white pillars. The compartments were separated from each other by a block of light brown stone masonry.
Adding concrete sculptures
The in itself decorative architecture was further embellished by Aubert by situating single-handedly made concrete sculptures in all kinds of suitable places at he exterior of his house.
Just an impression. Upon and in front of the horizontal beams on the niches of the ground floor seahorses got a place. The upper edges of the balustrades of the balconies served as a place for concrete sculptures of animals such as wolves, deer and springbok.
The banister of the stairs to the first floor was decorated with a snake. On the wall separating the niches of the ground floor from the street, elongated pre-historic reptiles were given a place. The wall of an extension to the right of the main house was decorated with a large pitcher, male heads on a pedestal and a rearing horse.
Arranging the sculptures on the frontside of the property and on balconies made them highly visible to anyone who passed by the house and, in general, the inhabitants of Antignac appreciated the display.+ Aubert was also asked by some residents to make sculptures to brighten up their own garden.
After Aubert's death in 1982, the sculptures for some time remained part of the property. In the images at the very top of this post, taken in 2003, they still can be seen, but in the years after the sculptures, including creations in wood that Aubert also made, were spread over various parties.
In 2014 Aubert's property was bought by visual artist André Fialip. In the first outbuilding on the left side of the house, he established his gallery, which is now indicated on the facade with colorful inscriptions.
The adjacent outbuilding now houses the Maison de la Minéralogie du Massif Central, a continuation of the collection of stones already assembled by Aubert, which at his time was accessible through the door with the skull, as mentioned above.
Documentation
* notes and photos by Bruno Montpied on his weblog
* article and photos by Sam and Jo Farb Fernandez on website SPACES
* article in the book by Bruno Montpied, Le Gazouillis des Éléphants, 2017
* article by Emmanuel Boussuge in Revue Recoins, nr 2 (summer 2008), p. 42-47
François Aubert
Decorated house
along the D3,  just outside Antignac
(about 1 km from the western border of the built-up area of the community)
Antignac, dept Cantal, region Auvergne-Rhône-Alpes
decorations have been removed, the house can be seen from the street
streetview
Posted by henk van es at 2:50 PM