At the end of the summer, the Arboretum Mustila in Finland is exceptionally open to visitors in the early evening. As the picture above shows, the walking paths are then lit with braziers. Music is being played and the cafes are open.
During such an evening opening, visitors to the arboretum will experience the special atmosphere of flora and fauna while walking along the paths, an atmosphere that is heightened by the appearance of the many wooden sculptures that line the paths. 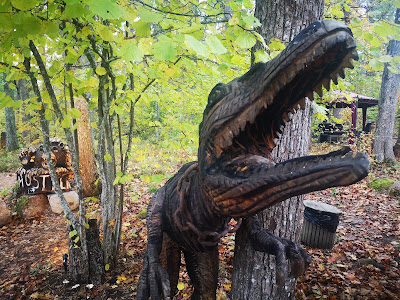 Indeed, the arboretum has been graced by dozens of wooden sculptures, mostly made with a chainsaw by non-professional artists.Thus, this arboretum can also be seen as an art environment in the capacity of a sculpture trail.

In the field of art environments in Europe there are only a few of such creations, with the most authentic site being the Sculpture Trail created by Frank Bruce in the Cairngorms National Park in Feshiebridge, Scotland. 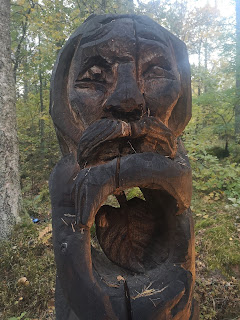 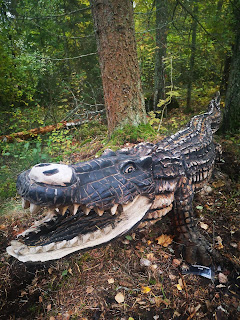 The Arboretum Mustila is located in the community of Elimaki, some 115 km north-east of Helsinki. It was founded on the premises of a mansion named Mustila in 1902, mainly to see if exotic conifers could thrive in the Finnish climate.

Apparently the test was successful, because the Arboretum has now become a unique area, 120 hectares in size, richly filled with about 100 species of conifers and more than 200 deciduous trees.

In addition, there are many colorful flowering perennials, shrubs and  also vines. 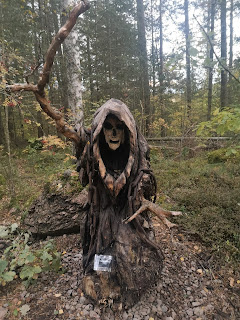 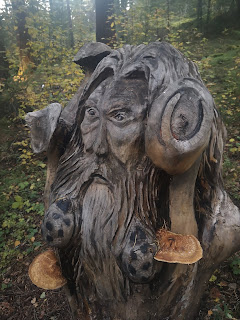 The Arboretum has a few special places, such as the Rhododendron Valley, which blooms in June and then forms a veritable sea of flowers with its hundreds of species.
The dozens of wooden sculptures along the walkway are also such a special feature.
The sculptures are provided by experienced non-professional artists who work with the chainsaw, such as Leo Laakko , Taisto Pehkonen, Juha Käkelä and Leo Löppönen.
Special mention deserves August Eskelinen, who has contributed the largest number of sculptures to the Arboretum's collection.
He was born in 1975 and currently lives in Lappeenranta, some 115 km east from the Arboretum. Although in his young years he was creatively engaged in making drawings, his woodcarving activities only started in his early forties.
Currently Eskelinen has a studio called Puuveistos Studio Eskelinen (Woodcarving Studio Eskelinen) and makes woodcarvings to order.
Early 2020 Eskelinen saw a message saying that there would be sculpture days in the Arboretum in June 2020. He signed up and was allowed to participate.
His participation resulted over time in the contribution of a large number of wooden sculptures and in a friendship with the staff of the Arboretum which entailed that he got involved in the further development of the site by discussing which type of woodwork creation best suits the Arboretum. 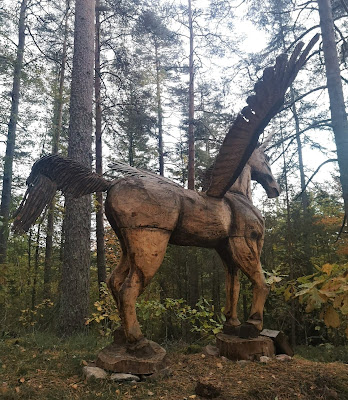 Finally two informative remarks. First, it should be mentioned that the placement of the wooden sculptures is part of an arts project of the Arboretum, which is financially supported by the EU Agricultural Fund for Rural Development.
Secondly, in Finland there is a long tradition of woodworking with the chainsaw by non-professionals. The Finnish Association for Rural Education organizes an annual Bear Festival, a woodcarving competition, which in 2021 took place for the eighth time in Ilomantsi. 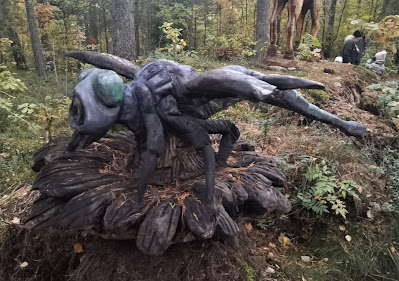 Documentation
* Website of the Arboretum
* Article on the YLE website about the sculpture days June 2020
* Article on the MSL website about various self-taught artists, including August Eskelinen
Arboretum Mustila sculpture trail
Mustilantie 57
47200 Elimäki, part of the municipality of Kouvola, region Kymenlaakso, Finland
the Arboretum can be visited all year round
Posted by henk van es at 4:40 PM