Driving north towards Paloki on national road 542 in the North Karelia area in Eastern Finland, one will pass Cafe Saurus.
For those interested in art environments it is advisable to stop there and look around in the sculpture park Ronttopuisto located near the café. 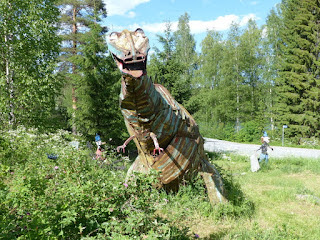 Near the entrance of the café a high-rising dinosaur made from sheet metal welcomes visitors to the park and the café, that takes it's name from that creation. There is a sign by the dinosaur that -freely translated- says that he comes from further away and that in this part of the world there are little roadside eateries.
The name of the person who made the sculptures exhibited in the park, is only known to a small circle. For the general public, the artist wishes to remain anonymous. The maker's skill in shaping and welding iron materials suggests that he is or was a blacksmith. 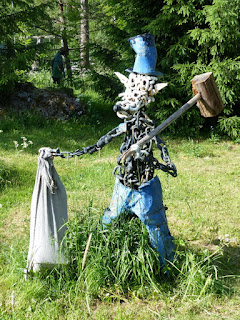 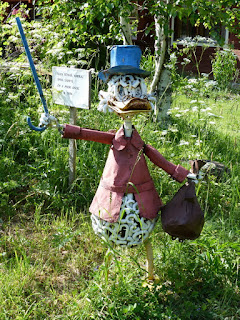 Apart from some large creations, this art environment mainly includes small-scale sculptures, which often have been made  of metal rings welded together, such rings as are used to make heavy chains.
As the accompanying images show, some of the sculptures are very colorful in appearance. These depict characters that appeal to children, such as Donald Duck, above at the right. A caption accompanying the sculpture reads I'm a poor duck. Give me a lute!
The image above left depicts a blacksmith, about whom the accompanying caption says: With a mallet and piglets in a sack. I am, after all, a big and evil smith. Maybe not so innocent towards children after all?
The images below depict an eagle (at the left) and an old man with a walking stick (at the right). 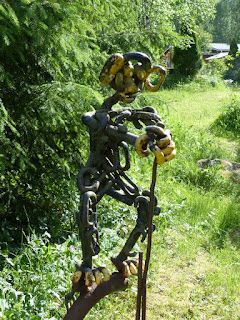 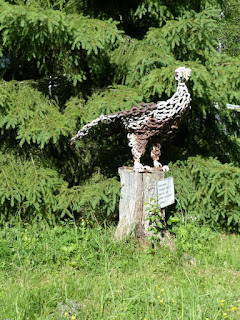 The image below depicts Pegasus, a winged, divine horse from Greek mythology, usually depicted in white.
The horse in Ronttopuisto can carry two children and with a mechanism it can make a movement as if it were taking off. 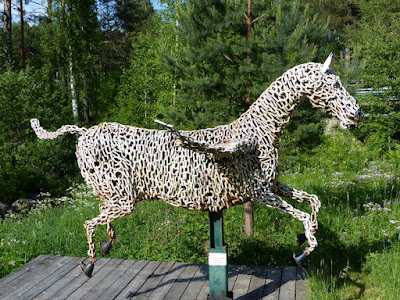 The park has a playground for children and the Café Saurus can arrange cottage accommodation and sauna facilities on request
Documentation
* Article by Minna Tuuva  on the ITE Taide website
* Article (2016) on weblog Kauneudesta lapsiin
Anonymous
Iron sculptures in Rontto park
79830 Heinävesi, North Karelia, Eastern Finland, Finland
can be visited freely
streetview