When World War I started in 1914, the German army attacked France in the north via Belgium and Luxembourg, an advance that was stopped by France at the Battle of the Marne, after which the two armies became immobile for years in a line of trenches in northern France, stretching from the North Sea to the border of France and Switzerland.
The French army had bases and command posts along the entire line from which soldiers through trenches could go to the front line.
This article reviews one such post that was set up in a limestone quarry near the Thiescourt community in the Oise department. It's interesting because of the decorations applied in various places of the quarry by soldiers of the French army. 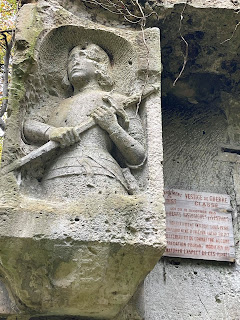 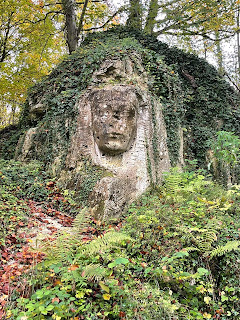 France has more such war sites decorated with works of art, and in most cases the makers have remained anonymous ¹.
However, with regard to the decorations in the Carrière du Chauffour, it is known that four creations were made by Louis Leclabart (1876-1929). Three of these are also named as such, namely a sculpture depicting Jeanne d'Arc, as in the very first image (and enlarged in the one above left), a depiction of a two meters large Sphinx, above right, and another one of a fountain (no picture here).
The fourth creation hasn't been specified, but it might just appear among one of the next images in this post.
More about Leclabart
Born in Péronne on July 26, 1876, young Louis attended the art school in Amiens at the age of ten, got a job at the studio of the painter Albert Roze in 1893, was in military service in 1896 and 1897, and then went working at a studio again.
There are no known works of art that he could have made during that period. In 1914, now in his late thirties, he was mobilized. Because of his age he did not have to go to the front, but he did maintenance work and was a stretcher bearer.
Between June 20 and September 11, 1916  he worked at the Chauffour Quarry, where he made some of the decorations depicted in this post.
Later, from March 1918, he would work in the army as a designer of blueprints from aerial photographs. and he illustrated his personal notebook with drawings of airplanes and aeronautical scenes.
Demobilized on January 6, 1919, in the early 1920s Leclabart would realize eight monuments, which were built in particular in a number of communes in the Somme area, this in honor of war victims from those communes.
Louis Leclabart died on October 22, 1929, aged 53. 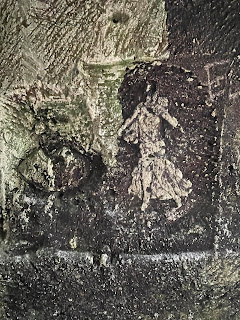 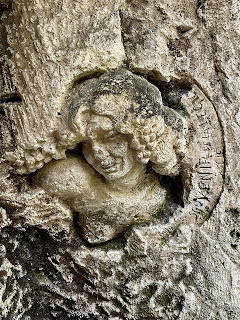 More about the quarry and its decorations
The military settlement in the quarry was 250 meters from the front line, accessible to the soldiers through trenches. It would be in use from 1914 until June 1918, when it was 10 km behind the German lines.  The war ended with a ceasefire on November 11, 2018
The quarry was located partly in the open air and partly underground. Various shafts provided light in the underground part. There were also the quarters for the soldiers, which offered protection against bad weather and possible bombardments from enemy cannons.
Besides the dormitories for the soldiers, there were rooms for officers, kitchens, toilets and also a chapel for religious activities with an altar and a cross.
The decorations on the walls of the quarry are part of a large number of inscriptions made by the soldiers, such as surnames, scenes of military and daily life, all kinds of portraits, caricatures of enemy soldiers, flowers and so on.
In the midst of all those inscriptions, the ones illustrating this article, not only those of Leclabart, offer a qualitative surprise.
Since November 1999, these creations have a protected status as a historical monument, which is indicated on the spot with a sign. 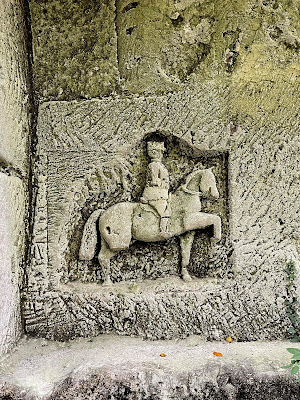 In the opening photo of the website of the municipality of Thiescourt there is an image of the sculpture of Jeanne d'Arc, as it appears in the quarry.
In an article (with the heading "Retombées économiques") on that website, the possible expansion of  tourist visit is discussed. One thinks of promoting green tourism, for example by building footpaths, but also promoting cultural tourism in which visits to various places of interest are mentioned, such as the church, but also the Carrières du Chauffour. .
Including the quarry in a touristic route will  probably require a lot of consultation, because the site is privately owned and the owner is reportedly not very keen on opening the site to visitors. 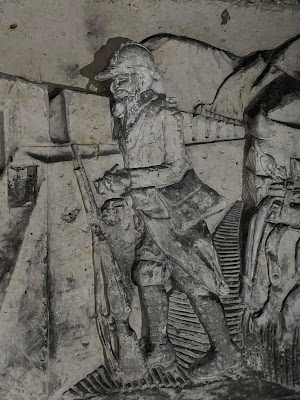 Documentation
* Website of the French Ministry of Culture stating the monumental status of the decorations
* Article (2013) by Pierre-Henry Muller about the Carrière du Chauffour
* Article on Wikipedia about Louis Leclabart
* Article, by Rémy Cazals, also about Louis Leclabart
note
¹ This weblog already has an article about the quarries of Confrécourt in France
Carriére du Chauffour
near Thiescourt, dept Oise, region Hauts-de-France, France
visitors are not very welcome,
so don't be surprised if a guard turns you away
Posted by henk van es at 4:36 PM