Krasnoyarsk is one of the largest regions in Russia with a length of 3000 km from north to south. It is located in the middle of Siberia and is included here because the art environment reviewed here is a singular architecture that should not be missing in a coherent overview of Russian sites.
The built structure is located in Taseyevo, a municipality of some 10,000 inhabitants in the Taseyevsky district in the south of the region. 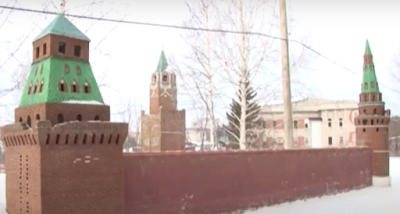 More about this site
The creation, located in a square in front of a high school in Taseyevo, was created by the physical education teacher Vladimir Chernyak, who started the project in the late 1990s.
Built in a 1:10 scale, it was reminiscent of the buildings of the Kremlin and that's why it is referred to as Mini Kremlin. Chernyak used pictures in books and magazines to shape his own creations. 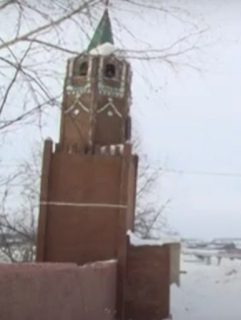 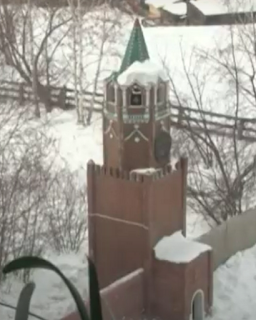 Chernyak, who had no training in construction or architecture, worked on the project for over 10 years, often assisted by pupils.
The uniformity of the stones used suggests that he made them himself in molds. However, whether he was really aware of the required number beforehand, isn't clear.


The project would take tens of thousands of bricks. Just in the first two towers that were built. more than 14 thousand stones have been processed.
And then there is a third tower and there are long walls connecting these towers 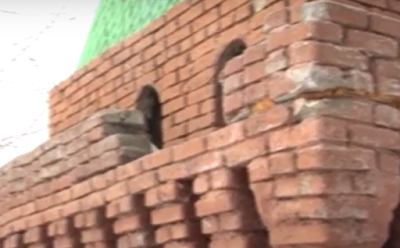 Chernyak was untrained as a builder, so it is striking to see what a sense of proportion and stylish finish, Chernyak has displayed, even knowing that he used images as an example
The stepped masonry as shown in the picture above (more details in the picture left) gives an impression of this.
The other images in this article show that the design of the towers, although simple and unadorned, was done with a good sense of proportion. 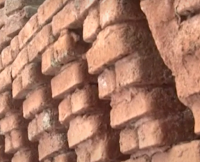 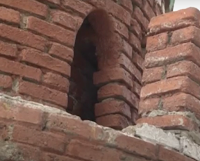 Unfortunately, the images in this post also show that parts of the towers and walls are falling into disrepair. One can see that stones have fallen out. In some places the walls have cracks.
Teachers of the school want the creation to continue to exist. They have set up a working group to obtain funding for a restoration, and even expansion of the site, from a presidential fund. 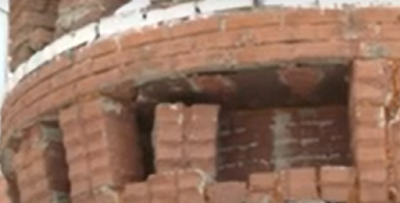 Not much is known about Chernyak, the builder of this singular architecture. As far as I understand, he has since left Taseyevo for elsewhere, but it is unclear whether he is still alive and can be involved in any developments
Documentation
* article (March 2019) on the website of Enisey TV,, with a video
* article (April 2019) on the website of newspaper HKK
Video
* Video (2019) by Yenisei TV company (2'28", YouTube, undated)