The colored images in this post show the fairytale characters as they populate this fairytale garden today.
But this site has a history of more than a hundred years, and after phases of neglect it has been redesigned several times, often accompanied by the appearance of new figures.
The story begins after the end of the First World War (1914-1918).
Some time after the war had ended, Isidore Kriesten, a forest worker and botanist, started making sculptures of fairytale characters, this to pay tribute to the phenomenon of fairy tales and the almighty Spirit of the Mountains. The sculptures got a place in his garden, named Waldmuseum zum  Berggeist (Forest Museum of the Mountain Spirit).
The garden also had small cabins and a welcome sign above a wooden bench, as can be seen in the accompanying uncolored images. 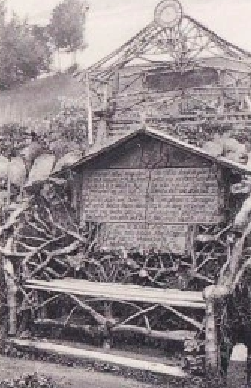 Kriesten lived in a self-built house outside the village of Wölfelsgrund, located on German territory in the years before 1945. After the Second World War by decision at the Yalta conference, there was a border change, and the village became Polish. renamed Międzygórze.
The village has many houses built in Tyrolean style. Located in the Southern Sudeten, the landscape around is rather rocky. Międzygórze is at an altitude of 680 meters and the sculpture garden is situated between 20 and 30  meters higher. 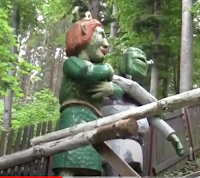 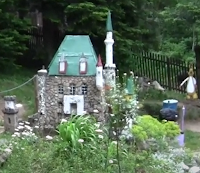 Seen from the point of view of this weblog - an inventory and documentation of art environments in Europe - most attention should be paid to the creation as it was made by Kriesten.
Although old postcards and photos of the site are available on the internet, informative texts about his life and works are missing there. All we know is that he worked on the site for about twenty years.
This means that around 1940 he stopped developing or maintaining the sculpture garden. Kriesten may have died around that time or somewhat later. If so, he did not experience the post-war change of the location of the site from Germany to Poland. 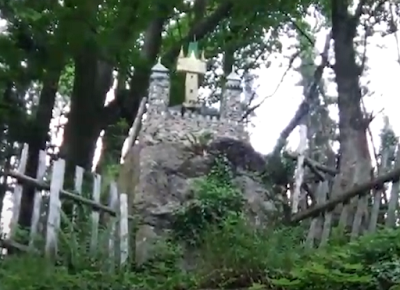 A number of successors

Three phases can be distinguished in the history of further concern with Kriesten's art environment.

The first phase covers the period 1940-1974. It is known that in those years the site was maintained by some interested individuals, first Mr. Bobrowski and his family, then Mr. Zubilewicz, a carpenter..
About this period there is also no further information . 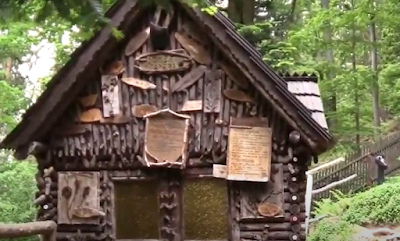 A second phase runs from 1974 to 1981. Then the garden was under the care of a group of boy scouts.
Old houses were rebuilt and new houses were added, such as those of Baba Yaga and Snow White. New characters were also added, such as the mountain spirit Rumcajs, the Three-Headed Dragon and the Knight Errant.
In 1981 this involvement of boy scouts ended and the site the site got neglected. 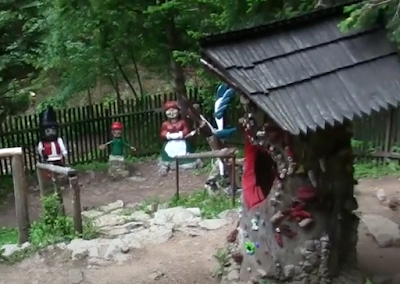 The third phase began in 1985 and continues to this day.
The initiative came from Jerzy Drążkowski, actively involved in the local branch of the PTTK (Polish Tourist and Sightseeing Society), accountant by profession, but also a passionate amateur sculptor who created all kinds of fairytale characters.
Financially supported by the local government of Bystrzyca Kłodzka, a village near Międzygorze, he tackled the renovation together with other enthusiastic volunteers, such as Jerzy Kral, Czesław Zawojsk and Jan Walorczyk. A new fence, retaining walls and new paths were built, houses were covered with appropriate roofs, and many shrubs and trees were planted,
Jerzy Kral made an exact stone replica of the former tower of the village of Śnieżnik near Międzygórze, which was blown up in 1973 due to its poor technical condition. Czesław Zawojski produced informative texts burned in wooden tablets that were placed near all kinds of items in the site. Jan Walorczyk took care of management aspects, such as arranging ticket sales 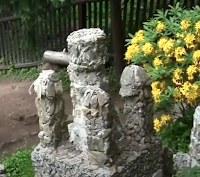 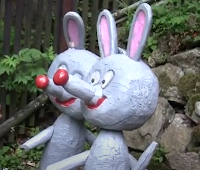 In the presence of a granddaughter of Isidore Kriesten, the renovated garden, now with an area of 2300 m²,  was officially opened on September 14, 1986. Gradually, the fairy garden became a popular destination, especially for parents with small children.
An impression of the fairytale characters in the garden
The  garden currently presents sculptures of fairytale characters from many corners of the world, including characters from Polish stories, such as: 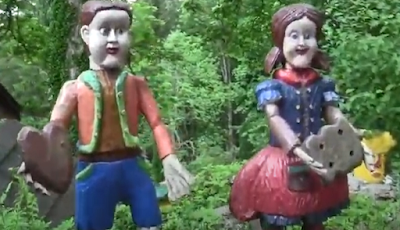 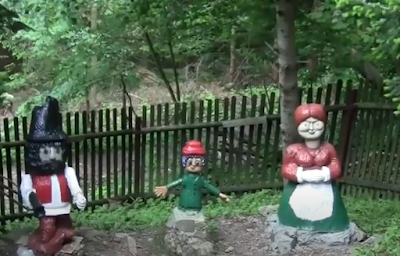 As is the case with a number of art environments elsewhere in Europe, this garden has acquired a touristic character and attracts many visitors
Documentation
* Wikipedia
* Website of the PTTK with a page about the site
* Google Maps with the location of the site and a variety of photographs
* Website of the community of Bystrzyca Kłodzka with a series of pictures of the site
Video
* Video by Marina Kalinowska on YouTube, April 2019, 12'56" (viewing the video on weblogs has been turned off by its creator)
Isidore Kriesten and successors
Fairy Tale Garden
Międzygórze, dept Kłodzko,  region Lower Silesia, Poland
all year open for the public
Posted by henk van es at 1:07 PM